The red blood cells possess a protein known as hemoglobin that binds and transports oxygen from lungs to other body parts. Therefore, hemoglobin is critical for survival and normal body functioning. Any defect in the gene coding for this oxygen-carrier protein may disrupt all vital body functions and present a spectrum of life-threatening conditions. Once such condition is sickle cell anemia.

Sickle cell anemia (SCA) is an inherited anemic condition that appears due to a defect in the gene coding for hemoglobin (HbS). Owing to the mutation, RBCs become sickle-shaped (crescent-shaped). The lifespan of these defective red blood cells are also greatly reduced. Ultimately there is a decline in the red blood cell population leading to anemia. Sickling produces sticky ends that cause red blood cells to clump together and clog the blood vessels. Obstructed blood flow and inadequate oxygen supply causes a range of functional disorders that often proves fatal.

Red blood cells, or erythrocytes, typically have a biconcave shape. It is similar to a disc with a central depression. Unlike other cells in the body, it does not contain a nucleus. Red blood cells are approximately 7 to 8 millimeters thick and flexible enough to bend and squeeze through tiny capillaries. Hemoglobin (HbA), a protein that helps in transporting oxygen, fills almost the entire volume of the RBC cell. Hemoglobin comprises of a simple, iron-containing heme protein molecule. The iron molecules of heme, hold oxygen during its transport through the blood. Oxygen is taken up from the lungs and distributed to all tissues in the body for its ongoing metabolism.

A defect in the gene coding for hemoglobin (HbS) changes its molecular structure. Although normal oxygen levels do not precipitate any change in HbS, under low-oxygen level simple molecules of HbS coalesce together to form complex polymer. Presence of other forms of hemoglobin, dilutes the concentration of HbS and interferes with its polymerization. Upon being exposed to low-oxygen conditions, biconcave RBC is converted into a sickle shape. Often the initial sickling event is reversible with re-oxygenation causing sickle-shaped RBCs to become biconcave again. However, with recurrent episodes the flexibility is lost. Red blood cells cannot return to the biconcave shape even with restoration of normal oxygen levels.

The change in shape of red blood cells leads to a host of clinical symptoms. Mutations of hemoglobin also leads to changes in red blood cell membrane permeability and cellular interactions. Sickle shape produces free sticky ends that often glue together forming clumps of cells. Phagocytic immune cells known as macrophages tend to destroy these abnormally shaped cells and reduces half-life of red blood cells. This leads to hemolytic anemia, meaning that the hemoglobin concentration of the blood is lower than normal due to red blood cell destruction . These deformed cells also clog the blood vessels interrupting normal blood flow. Various organs and tissues of the body are then starved of oxygen to some degree especially at times of increased demand. 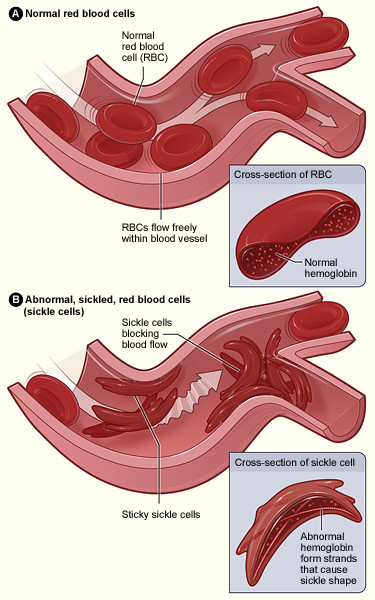 Although the effects of sickle cell anemia is widespread, there are more prominent effects on certain organs and tissues. The low oxygen state adversely affects the bone marrow and bones. The kidney function is also impacted as a result of structural changes of the kidney. The spleen serves as a reservoir of red blood cells and other blood cells. Sickle cells anemia therefore also impacts on the function of spleen. Portions of the spleen may die as a result of oxygen deprivation. Since the spleen plays an integral role in immune function, the impairment with sickle cell anemia lowers the immunity. A person may therefore be more prone to various life threatening infections.

Sickle cell anemia is an autosomal recessive disease. Inheritance of one copy of the defective gene from each parent is necessary for the disease to become present. Heterozygous individuals (carriers), having sickle cell trait, possesses only one copy of HbS allele. These individuals produce a combination of normal and mutated hemoglobin. A small population of RBCs may become sickle-shaped in carriers but this does not lead to symptoms of the disease. Parents with the sickle cell anemia trait will have:

Any event that increases the acidic concentration in the blood is more likely to induce sickling of the red blood cells. The main events that may precipitate such changes include:

Other less common triggers include:

However, this protection from malaria should not detract from the fact that sickle cell anemia itself can have fatal consequences.

Reduction in blood flow to various tissues and organs as a result of obstruction of the block vessels coupled with lower oxygen concentration leads to damage of tissue that is often perceived as pain. It also compromises the function of the affected tissue or organ thereby contributing to various other symptoms.

Pain is the most notable symptom of sickle cell anemia. The severity of pain depends on the extent of vessel obstruction or organ damage. Typical sickle cell disease pain appears spontaneously and may last for few hours to several days. Extremely painful conditions may need immediate medical attention. Commonly affected areas include the abdomen and the long bones of the extremities.

Severe cases of sickle cell anemia may lead to various complications such as :

Although the symptoms and family history may raise the suspicion of sickle cell anemia, further investigations are required. Various tests may be conducted to detect the following : 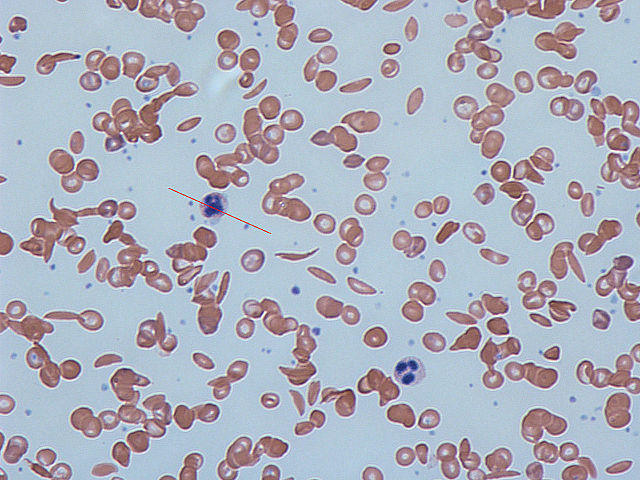 Preventative care is advisable for managing the symptoms of sickle cell anemia. This includes :

Blood transfusions are not routinely required for sickle cell anemia. Anemia can be prevented  It is only considered when there is a sudden destruction of large amounts of red blood cells associated with certain infections or acute splenic sequestration.

Bone marrow transplant offers the most effective strategy for treating sickle cell anemia. The bone marrow cells of the sickle cell anemia patient is replaced by marrow from a healthy donor. Owing to the risk of rejection by the patient’s body and the scarcity of donors, treatment of secondary symptoms serves as a better option.

Other medications may be used to treat and manage the various complications associated with sickle cell anemia.