Appendicitis affects about 7% of the American population at some point in their life with about 250,000 new cases occurring every year. It tends to occur in teens and young adults more often than in children and older adults. Overall men are slightly more at risk than women are of dveloping appendicitis. Appendicitis can lead to serious complications and without medical intervention this can even turn deadly. Therefore spotting appendicitis as quickly as possible is essential.

The appendix, more correcly known as the vermiform appendix, is an elongated tube-like pouch from the cecum of the large intestine. It only has an opening at one end, at the point where it extends from the cecum. It appears that the appendix serves as a reservoir for the bacteria that are a part of the normal intestinal flora (“good bowel bacteria”) among other functions. 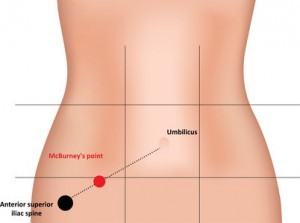 Appendicitis simple means inflammation of the appendix. It arises when there is a blockage in the appendix and bacteria multiply rapidly to then infect it. The appendix fills up with pus and swells. If it is not treated, it can eventually rupture (burst) which can be dangerous. Treatment for appendicitis requires surgical removal of an appendix (appendectomy).

How To Spot Appendicitis

Appendicitis is usually easy to spot because the pain is severe and comes on suddenly, is usually isolated to the abdominal area when the appendix is located and tends to worsen over hours. However, there are times where this pain is mistaken for other conditions. Since abdominal pain is a common symptom, some people may delay medical attention in the hope that it will resolve without medical intervention.

Despite the fact that pain is more common in teens and young adults, particularly in males, it can affect any gender and age group. In fact there have been cases of appendicitis in newborns although this is rare. Appendicitis is the most common reason for surgery in women who are pregnant, which is unrelated to pregnancy or other gynecological problems. It occurs in about 1 in 1,500 pregnant women.

Other Conditions That May Resemble Appendicitis

What are the Signs of Appendicitis?

The duration of appendicitis symptoms is usually less than 48 hours in most cases that report to the emergency room or a doctor. However, there are rare instances where a patient may report pain for as long as 2 weeks. With appendicitis, the pain is so severe that a person will lie down and draw the knees to the torso in order to prevent the pain from worsening.

In the early stages of appendicitis, a person often experience pain around the belly button region (peri-umbilical pain). As the inflammation worsens, the pain moves to the right lower quadrant (RLQ) of the abdomen. Sometimes this initial pain may also be felt in the epigastric region (upper middle region of the abdomen). However, even when the pain occurs here, it quickly migrates to the right lower abdominal quadrant.

Loss of appetite is another common and early symptom of appendicitis. Although this is a common symptom in many diseases, there may be a total lack of appetite in appendicitis usually in accordance with the pain. A person may also not want to drink water or any other beverage. However, in about 20% of patients there is no loss of appetite or it is not as severe.

Nausea is another common symptom and occurs in almost all cases of appendicitis. It may start when the pain arises or follow a short while after the initial pain especially as the pain worsen. Vomiting also occurs in most but not all cases. In fact about half of all patients with appendicitis do not experience vomiting so it is not a reliable indicator of appendicitis. Similar to the nausea, the vomiting occurs after the pain starts.

The characteristic feature of appendicitis is pain in the right lower quadrant (RLQ) of the abdomen. The belly button pain that arises initially migrates to this location within a short period of time. Usually the other symptoms, like nausea, vomiting and lack of appetite, are already present by the time pain becomes localized in the lower right region of the abdomen.

A low-grade fever tends to arise after the symptoms above develop. It may not be present in every case of appendicitis. Abdominal bloating may also occur usually as the inflammation worsens. In many instances a person will report a change in bowel habit, such as diarrhea or constipation. However, this is not an early symptom because a person may not notice such an alteration in bowel habit within the short duration that the other symptoms arise.

When is appendicitis a medical emergency?

Appendicitis should always be approached as a medical emergency since there is a risk of it bursting and even more serious complications can arise, like septic shock. Therefore all of the signs and symptoms above should be taken seriously and medical attention must be immediately sought. However, the following signs and symptoms are extremely serious and may be an indication that a complication has already arisen. This includes: