There are many different types of autoimmune diseases yet Sjogren’s syndrome which is among the more common of these conditions is not very well known. It is a condition marked by dry eyes and a dry mouth but there is much to this disease that can extend to almost every part of the body. There is no cure for Sjogren’s syndrome although many drugs can limit the disease and control the symptoms quite effectively.

What is Sjogren Syndrome?

Sjogren syndrome is a chronic disorder marked by inflammation of the exocrine glands (glands with ducts) which produce secretions to moisturize tissue. It mainly affects the tear glands and salivary glands thereby leading to a deficiency of tears and saliva respectively. However, other organs and systems may also be affected. For example, dry skin is commonly reported and the joints, blood vessels, muscles and lungs may also be affected among other tissues and organs.

As with most autoimmue diseases, the reason for the inflammation in these different tissues and organs is due to the immune system. However, the exact cause is not clearly understood. Sometimes Sjogren’s syndrome may occur along with other autoimmune diseases like rheumatoid arthritis (RA) and systemic lupus erythematosus (SLE). Although Sjogren’s syndrome is not as popularly known as RA and SLE, it is actually the second most common rheumatologic condition after SLE.

The immune system’s primary function is to protect the body against foreign threats. One of the ways it does this is to isolate invaders and attack it through a host of mechanisms including the action of immune chemicals and immune cells. Sometimes the system is disrupted and the immune mechanisms turn against the body itself. It may target specific tissues or just about any organ in the body thereby triggering inflammation. This is known as an autoimmune disease.

In Sjogren’s syndrome the tissues of certain glands are targeted. These glands are known as exocrine glands because it releases its secretions through a duct. More specifically it is the glands responsible for moisturizing tissues that is affected. The tear glands and salivary glands are the main targets. The reason why the immune system is triggered to behave in this manner is not clearly understood. However, there may be certain triggers such as viral or bacterial infections. 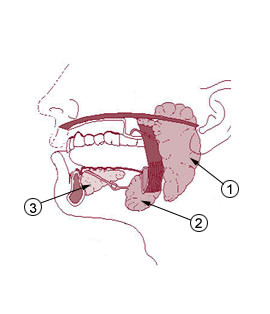 Some people have been identified as being more likely to develop Sjogren’s syndrome based on risk factors.

Irrespective of these risk factors, Sjogren’s syndrome could still affect a person who is deemed low risk.

Sjogren’s syndrome can be classified as primary or secondary.

The main symptoms of Sjogren’s syndrome are:

These are often the first symptoms as well. The term sicca is used to refer to the dryness characteristic of Sjogren’s syndrome. Therefore it is also sometimes referred to as sicca syndrome. About half of all Sjogren’s syndrome patients also report skin symptoms, the most common being excessively dry skin. There may also be other skin symptoms like red to purple spots (purpura – bleeding under the skin) and hives (urticaria).

Apart from the skin symptoms, there may also be other symptoms affecting other parts of the body besides the glands. These extraglandular features include:

There is a significant degree of overlap of symptoms with Sjogren’s syndrome and other rheumatologic conditions.

It is not uncommon for Sjogren’s syndrome to be misdiagnosed for long periods of time. Sometimes the symptoms are incorrectly reported which can be misleading for health care professionals, like instead of complaining about dry mouth some patients may instead report increased thirst. The condition can be difficult to diagnose and may require investigations that are not routinely done. A range of tests may be conducted such as:

Medication is usually prescribed to treat and manage Sjogren’s syndrome. However, in some cases surgery may be necessary to treat the complications of the disease. Sjogren’s syndrome is a chronic disease and there is no cure for the condition. Treatment focuses on ongoing management with the use of different medication. These drugs may include:

Surgery is rarely done. It may include procedures to block the drainage of tears through ducts. Sjogren syndrome patients may also require more frequent and extensive dental work as the mouth dryness leads to a host of dental complications.