The human spine is made up of several different components other than just the vertebrae (bones) and spinal cord. Small muscles, ligaments and spongy discs allow for the strength and flexibility of the spine. The spinal cord is indeed important but the other parts of the spine also play a very important role in movement of the body and in protecting the spine. When any of these parts malfunction, it can compromise nerve function and spinal flexibility ultimately making life difficult and uncomfortable. A slipped disc is one such condition.

There are 24 separate bones (vertebrae) and 9 fused bones that make up the spine. It is these separate bones that give the spine most of its flexibility. It includes from top to bottom, the 7 cervical vertebrae (neck), 12 thoracic vertebrae (chest) and 5 lumbar vertebrae (lower back). In between these vertebrae are spongy discs that prevent the bones from rubbing together during movement and also absorbs shock to the spine. The 9 fused bones do not have these spongy discs.

These discs are known as the intervertebral (IV) discs because it lies between two vertebrae. It has an outer part made of fibrous tissue that is firm yet flexible. The inner part is a soft gelatinous substance that allows for the disc to absorb forces and prevents the vertebrae on either side from touching each other during movement. The fused bones may have also been separated by a disc earlier in life but eventually these bones become one large bone by the early 30s, if not sooner.

What is a slipped disc?

A slipped disc is where the intervertebral disc protrudes and presses against the spinal cord or nerves. It is actually due to a weakening in the outer fibrous part of the disc that allows for the soft inner part to bulge. This is also known as a herniated or prolapsed disc. The name slipped disc can sometimes be misleading because it may seem like the entire IV disc has slipped out of the place. This is not so. It is usually only a portion of the disc that protrudes.

Although a slipped disc can occur anywhere along the spinal column, it usually affect the lower vertebrae and specifically the lumbar vertebrae. Apart from causing pain, the protruding portion of the disc can also compress nerves and affect its functioning. A slipped disc is not among the most common causes of low back pain accounting for only 10% of low back pain cases. It mainly affects people between the 30 to 50 year age group and men are twice as more likely to be affected than women. 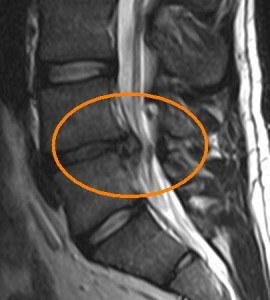 There are several reasons why a slipped disc may occur. However, it is not always clear why some people develop the condition while others with similar risk factors do not.

Aging causes the discs to lose some of its water content and become less flexible. The actual herniation does occur because of age. Instead older age increases the risk of a herniation occurring. This does not mean that every person will develop a herniation as they get older. By taking the necessary precautions, a slipped disc can be avoided in many instances.

Lifting heavy objects with the back muscles are by far one of the most common causes of the herniation. It is more likely to happen in an already weakened disc (like with age) and with very heavy objects. Although people who lift heavy objects on a daily basis are at a greater risk, a herniation can occur with even a single incident. Twisting and turning while lifting also increases the risk.

Being overweight can place a greater strain on the discs and weaken it. However, it does not usually cause the herniation. Instead excess body weight increases the risk of a herniation occurring from some cause.

There may be certain genetic factors that could contribute to the disc weakening. It appears that some people have a predisposition to a herniated disc as do other members in their family. However, similar to obesity these genetic facts increase the risk but do not cause the herniation.

Most people will have pain either at the back and/or along the path that nerves arising from that part of the spinal cord. But it is possible to have a slipped disc and there may be no symptoms. Contrary to popular belief, the symptoms do not get progressively worse until surgery is the only option. Most cases improve over several weeks and the herniation shrinks in this time since it is only a small part of the disc that is affected. Only a minority of cases require surgery for symptoms that persist beyond 6 weeks.

The pain occurs at the part of the back where the slipped disc lies. It is believed that pain is due to the pressure on the spinal cord as well as from inflammation emanating from the herniated portion. The pain is typically severe and of sudden onset. Lying flat tends to relieve it.

The pain may extend all the way down the leg or arm depending on where the slipped disc lies. Sciatica is one such condition. The sciatic nerve is formed from fibers that emerge from L4 to S3. When these fibers become compressed (“pinched”) then the symptoms may be felt as far down as the foot.

The pressure on the nerves may not only elicit pain. It can also affect signals travelling in these nerves or irritate the nerves in a way that abnormal sensations may be experienced. Pins-and-needles, tingling and numbness may therefore occur along the path of the nerves.

Some of the nerves that may be compressed also carry motor signals. These are signals to the muscles that allow it to contract and relax at will. If the nerve signals are disturbed, muscle weakness may be observed in the arm or leg depending where the compression occurs.