Tobacco smoking is known to cause a number of diseases, some of which can be life-threatening. Tobacco use is linked to 5 million deaths throughout the world every year. Although the majority of smoker’s are aware of the adverse effects of smoking, many wish to believe that they will not be one of these statistics. Smoking not only causes, but also contributes to hundreds of diseases. There are many instances where smoker’s ignore the constant symptoms that arise with smoking which may often be a prelude to the onset of certain diseases. These symptoms should serve as a warning sign.

Why constant sore throat in smoker’s?

The movement of cigarette, cigar or pipe smoke through the airways to the lungs causes irritation in these passages. There are thousands of chemicals in tobacco smoke and hundreds of these substances are known to be carcinogenic (cancer-causing chemicals). However, even those chemicals that are not associated with cancer can still cause irritation and lead to inflammation. This may extend from the mouth, down the throat to the trachea, bronchi and eventually in the lungs.

The throat is a long muscular tube that runs from the mouth and continues to the esophagus (food pipe) and lower airways. A small flap known as the epiglottis covers the opening to the larynx, so that food or drink coming down the throat does not enter the airways. The medical term for the throat is the pharynx. It can be further divided into three parts:

Pain or soreness in any part of the pharynx can be termed as a sore throat. Although it is a symptom, a sore throat is considered to be synonymous with diseases where it is most likely to occur, such as pharyngitis, tonsillitis or tonsillopharyngitis and sometimes even laryngitis. 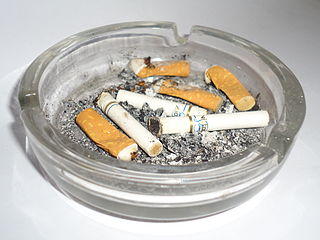 A constant sore throat among smoker’s does not always mean that it is cancer. A number of throat disease can account for the soreness. However, the carcinogens in tobacco smoke often raises the concern about cancer when symptoms like a persistent sore throat or chronic cough develops. Throat cancer may be responsible for a sore throat, and the recurrent coughing seen with lung cancer may also be a cause. But other conditions may be more a common cause of a sore throat in smoker’s than cancer of the throat or lung(s).

Nevertheless smokers should always bear in mind that their tobacco habit significantly increases their chance of cancer. Every cigarette makes cancer more likely to occur, and long term as well as heavy smokers should be vigilant. Generalized symptoms like weight loss, fatigue and changes in appetite should always be monitored as sometimes it is the early signs of cancer even when organ-specific symptoms are not yet obvious.

Tobacco smoking may either directly or indirectly lead to a sore throat. The symptoms of many of these diseases are very similar and it is therefore important to have it assessed by a medical professional like an otorhinolaryngologist (ENT specialist).

As discussed above, the chemicals in tobacco smoke can injure the lining of the throat as well as other parts of the airways. This injury results in inflammation, and pain is one of the prominent symptoms. Depending on the toxicity of the smoke, exposure to it and individual susceptibility, the inflammation may last for varying amounts of time.

Smokers are more likely to develop infections than non-smokers. Upper respiratory tract infections, like a sore throat, are common. Sometimes it may be associated with a cold or the flu, but a throat infection can occur on its own. Often it is caused by bacteria and viruses. Whereas a viral infection often resolves on its own with a period of time, bacterial infections may require medication.

Throat cancer is when a malignant tumor forms in the any part of the throat. Smoking is one of the main risk factors for developing throat cancer. Lung cancer is another common malignancy seen with cigarette smoking. It leads to persistent coughing which may irritate the throat. A sore throat can therefore be a symptom of both throat cancer and lung cancer.

Acid reflux is one of the most common upper gastrointestinal problems where the acidic stomach contents flow backwards up into the esophagus (food pipe). Sometimes it can rise as high as the throat. It can cause inflammation of the throat (reflux pharyngitis). Typically reflux worsens at night and many people with reflux pharyngitis report a sore throat in the morning which eases during the day.

A morning sore throat  can also be a symptom of sleep apnea. This is a condition where the breathing stops while sleeping. There are two types of sleep apnea. The more common type, obstructive sleep apnea, arises when the soft tissues of the throat collapse and block the airways. Eventually a person stops breathing and wakes up.

Long term smoking can lead to a chronic cough that may be dry (non-productive) or with phlegm (productive). It occurs for several reasons including chronic bronchitis and lung cancer. Chronic obstructive pulmonary diseases (COPD), like emphysema and chronic bronchitis, are common long term complications of tobacco smoking. 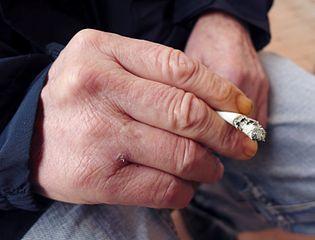 Smoking cessation is an essential part of treatment a persistent sore throat in smokers. In addition, treatment may also be necessary for the underlying cause. For example, a bacterial infection of the throat requires antibiotics while reflux pharyngitis may be treated with a combination of antacids and acid-suppressing drugs. The treatment is not as straightforward when it comes to conditions like chronic obstructive pulmonary disease (COPD) or cancer.

Gargles containing antimicrobial agents, anesthetics or even a saltwater gargle may offer some short term relief of the soreness. It can also be useful in treating certain throat infections to some extent. However, medical treatment may still be necessary. Even if these measures do offer some relief, it does not preclude the fact that tobacco smoking should be stopped as soon as possible. The need for smoking cessation is an imperative part of managing any recurrent sore throat in smokers.