Overall somatostatinomas are very rare. It occurs in only about 1 in 40 million people in the United States. The prevalence is equal in both men and women. Somatostatinomas are more frequently detected in the 40 to 60 year age group although some of the conditions it is associated with, like multiple endocrine neoplasia type 1 and neurofibromatosis, often start earlier in life. Since somatostatinomas are slow growing tumors, this may account for its diagnosis later in life.

Effects of the Hormone

The hormone somatostatin is mainly secreted by the D cells (delta cells) of islets of Langerhans in the pancreas. It is also produced by the stomach, duodenum and hypothalamus. Somatostatin has an inhibitory effect on a range of different hormones but since it has a a very short life in the bloodstream, its action is short-lived. It can affect many hormones but the most noticeable is it is effect on the digestive system.  Some of the major effects of somatostatin include the following :

It is important to note that somatostatin impacts on several other hormones in the body.

Effects of the Tumor

A somatostatinoma leads to the excessive secretion of the hormone, somatostatin. Therefore the effects of this hormone is prolonged and more pronounced than usual. The most notable of these effects is that insulin secretion is reduced and the glucose levels therefore rise. By hampering bile flow, fats are not fully emulsified and remains in the stool (steatorrhea). There is a also a greater chance of gallstone formation. Somatostatinomas inhibit stomach acid secretion to levels lower than normal, thereby impairing early digestion in the stomach.

Since a stomatostatinoma may also secrete other hormones simultaneously, this may alter the clinical presentation. This is largely dependent on the quantity of these other hormones that are secreted by the tumor. Depending on the size and location of the somatostatinoma, the tumor may also cause an obstruction or compression of the surrounding structures further altering the clinical presentation. Overall a somatostatinoma is a slow growing tumor and can be present for years before it is diagnosed. 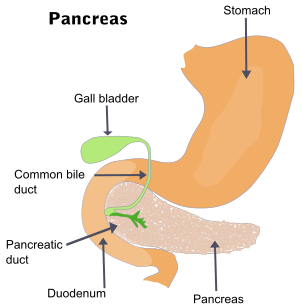 There may be additional symptoms present as a result of the underlying conditions that develop due to a somatostatinoma. A duodenal tumor may also causes symptoms of obstruction of the bowel, obstructive jaundice and even bleeding in the gut.

A somatostatinoma is the result of abnormal growth of somatostatin-producing cells, mainly in the pancreas and duodenum. The exact reason why a malignant tumor arises, in any location, is not clear in every instance. Somatostatinomas have been associated with multiple endocrine neoplasia type 1 syndrome (MEN-1) in some cases. In MEN-1, there are tumors (either benign or malignant) in at least two hormone-producing sites (endocrine glands). It arises due to a genetic defect which affects the production of a protein known as menin, that acts as a tumor suppressor.

Another two conditions that are associated with duodenal somatostatinomas specifically, are neurofibromatosis and pheochromoctyoma. Neurofibromatosis is a condition where tumors arise anywhere in the nervous system and is due to genetic defects. Pheochromocytoma is a rare tumor that occurs for unknown reasons. It most commonly occurs in the inner parts of the adrenal glands, which sit at the top of the kidney. Sometimes the tumor can occur outside the adrenal glands and elsewhere in the abdomen. Tumors seen in both neurofibromatosis and pheochromocytoma are usually benign.

Somatostatinomas are slow growing tumors and very rare. It is often diagnosed late. Since it causes a host of hormone disturbances, these conditions are sometimes first diagnosed and without further investigation, the underlying role of he somatostatinoma may not be identified. In the diagnosis of a somatostatinoma, there are three goals :

A somatostatinoma can be treated surgically or with chemotherapy. Surgery can be curative if the tumor is detected early. When surgery is not viable or effective, chemotherapy may then be considered. Since most somatostatinomas are detected at a late stage, the tumor has often spread to other organs (metastasis).

Once the diagnosis is confirmed and the tumor localized, it should be surgically removed (resection). If the entire tumor is surgically removed and there is no spread (metastasis), the condition can be cured. However, there are instances where the tumor cannot be removed entirely or has already spread and chemotherapy is then considered.

Although chemotherapy is a treatment option, it is usually not curative. Chemotherapy is conducted in instances where the tumor is unresectable or has spread beyond the pancreas or duodenum. The liver is the most common site of metastases. The prognosis in these cases are generally poor. Chemotherapy involves a combination of streptozotocin and 5-fluorouracil (5-FU).