Spermatogeneis is the process of sperm production and involves several steps that leads to the differentiation of cells into functioning sperm cells (spermatozoa). The process occurs in the seminiferous tubules of the testes (testicles). Sperm should be differentiated from the semen which is ejaculated with sexual intercourse. Semen is composed of sperm with fluid from the vas deferens, seminal vesicles, prostate gland, and other accessory glands.

Sperm Production in the Testes

Where does spermatogenesis occur?

The production of sperm is a multi-step process that occurs within the seminiferous tubules which are long hollow coiled tubes in the testes. There are close to 1,000 such tubules measuring some one and a half meters in each testis. The walls of these tubules have sperm in different stages of differentiation, Sertoli cells and interstitial cells. The sperm cells accumulate in the lumen of the seminiferous tubules and pass out through the epididymis. Here it matures further and is ready to be passed out along with other glandular secretions as semen (ejaculate).

The entire process of spermatogenesis is regulated primarily by hormones. Most of these hormones are discussed further under the male hormones (androgens).

Testosterone is essential for the maturation of cells and both starts and regulates the entire sperm production process. Growth hormone (GH) ensures that the testicular cells are constantly growing and active to meet with the metabolic demands of spermatogenesis. Small amounts of estrogen in males derived from testosterone may also play some role in the final differentiation of spermatids into fully functioning spermatozoa (sperm).

There are four major types of cells that arise during spermatogenesis :

Duration and Quantity of Sperm

This entire process takes approximately 74 days and the two testes produces about 120 million sperm per day. Sperm that exit the seminiferous tubules are fully developed but immobile. It takes about another day for it to mature further and become motile within the epididymis. This maturation is a result of testosterone, estrogen, enzymes and nutrient-rich fluid secreted by the Sertoli cells and lining of the epididymis. Sperm in the epididymis and vas deferens can be stored for about a month but is inhibited by local factors which keeps it inactive.

Parts of the Sperm 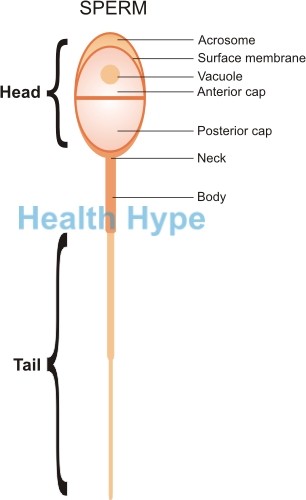 The two main parts of the sperm is the head and tail.

The head has a thickened front part known as the acrosome.It contains strong enzymes to digest tissue and allow the sperm to enter the ovum (egg in females) and fertilize it. The rest of the head is essentially a cell like any other cell but being a sex cell, it contains only half the number of chromosomes as other non-sex cells.

The tail has a thickened portion known as the tail body attached to the head by the neck. The body of the tail is laden with mitochondria which provides for the high energy demands of the sperm cell when moving. The tail, also known as the flagellum, has a number of microtubules collectively called the axoneme which is located in the center of the tail. The axoneme is the main mechanism that powers the movement of sperm.

Sperm motility is a result of the sliding action of the microtubules in the axoneme which creates a back and forth motion of the tail. A constant energy supply from the mitochondria in the body of the tail fuels the process.

Sperm need an alkaline fluid medium to move and its speed varies between 1 to 4 mm/minute. This is about one-fifth of an inch every minute. Sperm has a life span of several weeks but once in the female genital tract, this drastically reduces to just 1 to 2 days as it is highly active in this environment.