The stomach has an extensive blood supply to nourish it during digestion and can carry away some nutrients. Arteries carry blood that is rich in oxygen and nutrients to the organ while veins drain out wastes and carbon dioxide for processing. However, when most people talk about the stomach arteries they are actually referring to the abdominal arteries. The largest artery in the abdomen, and the one that is often of interest due to potentially life-threatening diseases is the abdominal aorta.

Arterial Blood Supply to the Stomach

The stomach receives its blood supply from four arteries:

These arteries arise from larger arteries all of which are branches or sub-branches of the aorta.

The celiac artery is the first major branch of the abdominal aorta.  There may be some variation in the branching that gives rise to these stomach arteries but it is largely the same in the majority of people. However, diseases and disorders of these stomach arteries are not common problems. Most people refer to the abdomen as the stomach and one of the common and very serious problem of the abdominal artery is ballooning known as an aneurysm. It can lead to tears and even bursting of the major abdominal artery know as the aorta.

Aorta in the Abdomen

The aorta is the largest artery in the human body and the main artery. It carries oxygen-rich blood from the left ventricle of the heart and distributes this blood to every part of the body through its numerous branches and sub-branches. Therefore any disease or disorder of the aorta can have widespread effects and often even fatal consequences. Apart from being the widest artery with the thickest walls, the aorta is also the longest. It can be divided into several parts as follows:

Arteries become smaller in size eventually becoming arterioles and capillaries which then become venules and veins. Although fluids, gases and substances can exit the circulation it is important to realize that the circulatory system is closed in that blood cannot exit under normal circumstances.

Ballooning of the Aorta

A relatively common and potentially deadly condition mainly affecting people over the age of 50 years is an aortic aneurysm. It is a condition where the aorta bulges due to weakening of the artery wall. Although an aneurysm can affect the thoracic aorta as well, it is more common in the abdominal aorta. Sometimes only a portion of the wall may bulge (saccular aneurysm) while at other times the entire width of the aorta bulges (fusiform aneurysm) which may sometimes be termed as an enlarged aorta. 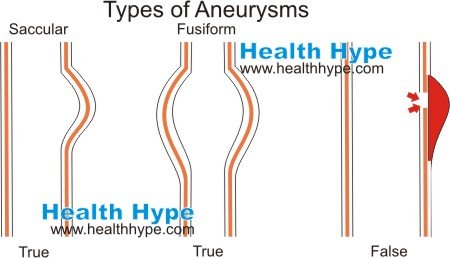 As discussed below, an aneurysm can lead to tearing of the inner walls of the aorta and eventually the aorta can burst. These are serious complications of an aneurysm. However, the abnormality in the artery due to an aneurysm can also have other serious consequences. It can increase the risk of clot formation. This clot may eventually dislodge, travel through the blood stream and eventually lodge in other arteries thereby reducing the blood supply to specific organs. For example, it can obstruct the arteries carrying blood to the brain and lead to a stroke.

Abdominal aortic aneurysms (AAAs) are usually asymptomatic. This means that most people will not experience any symptoms. It is only when the aneurysm becomes very large or if it ruptures that symptoms become evident as discussed below. There may at times be pain from the aneurysm but it is often non-specific. Other symptoms that may arise when there is no rupture is due to the aneurysm pressing on surrounding abdominal organs like nausea, vomiting, early satiety and urinary symptoms.

The aorta has to contend with very high pressures as it carries blood directly from the heart which forces out blood with each beat. In addition the aorta has to be able to perpetuate this force to some degree in order to ensure that the blood is propelled to every part of the body. It does this by way of its elastic walls that bulge and recoil. However, these high pressures not only can cause an aneurysm. The weakened wall may then tear or burst and this can become deadly within a few minutes to hours. 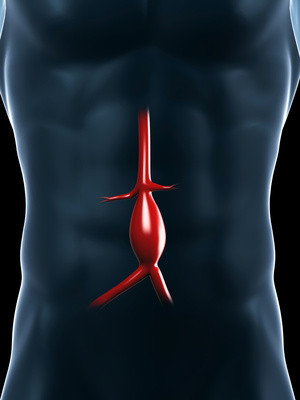 A tear in the aortic wall is known as an aortic dissection. The inner layer tears open and blood can pool in the abdominal wall thereby separating the layers. It is more common in th ascending aorta. This is a serious condition and can lead to the aneurysm bursting. Given that the aorta is the main conduit for oxygen-rich blood to be distributed throughout the body, any break in the aorta will allow blood to exit the circulatory system very quickly.  A burst aneurysm is known an aortic rupture. It has a mortality rate as high as 90%.