Swelling of the elbow is mainly due to inflammatory processes. Excessive fluid collects in the tissue spaces and any cavities in the elbow and causes soft swelling of the area. Sometimes it can involve the bone – bony swelling – although the bone is in most cases resistant to the inflammatory processes affecting the surrounding soft tissue. There are several possible causes of elbow swelling. Swelling at the back of the elbow usually involves the bones, joints or bursa. Swelling on the front of the elbow (brachial fossa) is more likely to be associated with the soft tissue, particularly muscles and its tendons, ligaments, blood vessels, subcutaneous tissue and skin. If the swelling is due to inflammation then there may be other features such as redness of the skin, warmth of the area and elbow pain.

The elbow joint itself is a hinge joint lined with a synovial membrane and then covered with a capsule. Three masses of fat lie between the synovial membrane and the capsule. However there are several other structures in and around the elbow joint. The main structures apart from the bones and joint which are important to take into consideration when considering any elbow problems are : 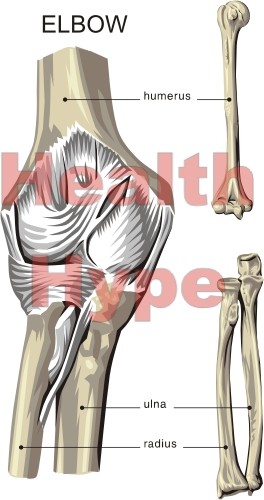 Parts of the Elbow Bones

There are certain parts of the elbow bones which are important when considering elbow problems like swelling. 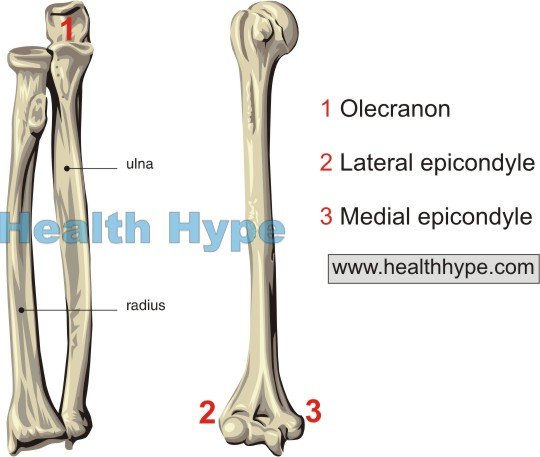 An elbow fracture is a crack or break in the the elbow bone. Although any part of the three bones that make up the elbow joint can fracture, it is more likely to occur on bony tip of the elbow (olecranon of the ulna). This part of the bone has minimal protection apart from the skin and a thin layer of subcutaneous tissue. It is therefore easily fractured. Causes may include :

Arthritis is an inflammation of a joint. A swollen joint is one of the symptoms of arthritis. The more common types are osteoarthritis where the cartilage of the bone degenerates and rheumatoid arthritis where the joint lining becomes inflamed for unknown reasons but possibly due to autoimmune mechanisms. Both these types of arthritis can affect the elbow joint but is more likely to occur in other joints. Septic arthritis is a more likely form of joint inflammation to afflict the elbow. It occurs when microbes, mainly bacteria, are able to enter and infect the joint structures. This may be associated with septic elbow bursitis or cellulitis.

Golfer’s elbow is the inflammation of the muscles and tendons that attach to the inner bony bump of the humerus at the elbow (medial epicondyle). It is therefore known as medial epicondylitis. These muscles and tendons, mainly the flexor and pronator muscles, becomes damaged due to overuse. It arises with improper techniques in certain sports and with repetitive actions in some occupations like :

Tennis elbow is similar to golfer’s elbow where the muscles and tendons that attach to the outer bony bump of the humerus (lateral epicondyle) becomes inflamed. It is known as lateral epicondylitis. The main muscles involved are the extensors in the forearm. It mainly due to an overuse injury but can sometimes occur for no clearly identifiable reason. The name tennis elbow came about because this injury is mainly seen with improper technique in tennis. It may also arise with shoulder problems which then places greater strain on the arm and forearm muscles.

A swollen elbow is a symptom and may accompanied by other signs and symptoms including :

Pain, particularly when it is more prominent with certain movements, and the decreased range of motion in specific planes are important indicators of the possible cause of elbow swelling.

There is no specific treatment for a swollen elbow. It depends on the underlying cause which has to be treated and managed in order for the swelling to subside. General measures that may be helpful include :

It is imperative to seek medical attention to diagnose the cause of elbow swelling. Some of the measures discussed above can aggravate the condition further and should only be used as a short term solution until medical attention can be sought.