Swelling of the throat can be a serious symptom if it arises suddenly and severely affects the movement of air into and out of the lungs. It can even be deadly if it is not attended to promptly. In most cases however, throat swelling is gradual and even when severe it usually does not impede air flow. There are often other symptoms that accompany it like pain, difficulty swallowing and/or a hoarse voice.

The throat is common channel where food, beverages and air move. Food and beverages enter through the mouth and pass down the throat to the esophagus. Air moves from the nose or mouth, down the throat and then into the larynx (voice box), trachea, bronchi and eventually reach the lungs. Exhaled air will move in the opposite direction. Sometimes the cause of throat swelling may stem from nasal cavity, larynx or lower down the airways, the mouth and other parts of the upper gut.

How does throat swelling occur?

The throat is lined with tissue that is similar to the respiratory and digestive passages. When irritated or injured, inflammation is initiated. Blood vessels dilate and the fluid from the blood empties out into the tissue spaces. Red blood cells usually remain behind unless the blood vessels are broken. The seeping of this fluid from the now leaky blood vessels is what causes swelling. It is a typical feature of inflammation along with pain, redness and heat.

However, swelling can sometimes be isolated just to one part like in tonsilitis where the tonsillar tissue become swollen. Sometimes the swollen feeling is actually due to a mass. It can include an abscess like a peritonsillar abscess (quinsy) or a tumor (benign or malignant). Sometimes masses in the surrounding area can impinge on the throat and even narrow it to some extent which may be mistaken as swelling of the throat.

Causes of a Swollen Throat

Sometimes the cause can be as simple as injuring the throat while brushing. At other times throat swelling can be triggered by certain foods and become life threatening within minutes. Swelling of the throat is sometimes associated with laryngitis (inflammation of the larynx) but the throat (pharynx) lies immediately above the larynx. 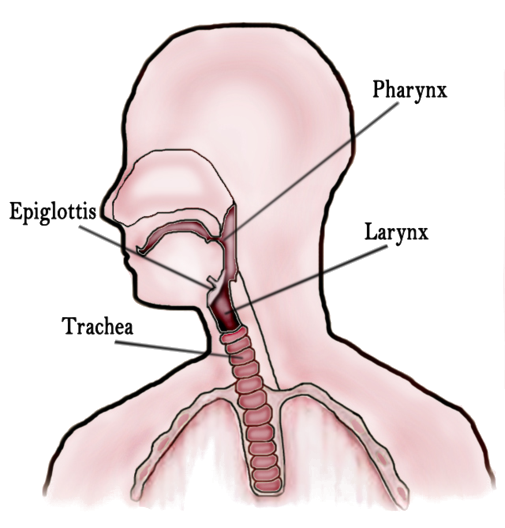 Pharyngotonsillitis is the medical term for inflammation of the pharynx (throat) and tonsils. Most of us simply refer to it as a sore throat. Viral infections like the common cold and bacterial infections like strep throat are common causes. However, a number of different insults can cause inflammation of the throat and tonsils, such as with smoke inhalation or repeated vomiting.

Goiter is the medical term for enlargement of the thyroid gland. It can occur for a number of reasons including inflammation  due to autoimmune mechanisms or infections and masses such as nodules. The swelling may be evident in the neck and can press against the throat. It usually does not cause a significant narrowing of the throat but many people will report a tightness in the throat that may be mistaken for swelling.

Anaphylaxis is a type of allergic reaction. It is the most severe form that can be life threatening if it is not treated promptly. In anaphylaxis the immune system rapidly reacts to the presence of certain triggers. Certain foods and drugs are among the more common triggers but it is not the cause. An immune hypersensitivity is the reason why anaphylaxis occurs and it usually starts within seconds to minutes after consuming a trigger.

Snoring occurs when the tissues in the throat become abnormally relaxed during sleep and then vibrate due to the movement of air in and out of the lungs. This causes the loud and irritating sound that we refer to as snoring. There is a partial obstruction of the air flow and while snoring is considered to be normal for some people it can lead to various complications. Many people who snore very loudly complain of a sore throat in the morning.

Acid reflux is a common cause of throat swelling. The acidic stomach contents rises up into the esophagus and can travel up as high as the throat. The stomach is able to withstand the strong acid and power digestive enzymes in produces but other parts of the tract do not have the same protective mechanisms. Acid reflux causes chemical damage to the throat tissue thereby triggering inflammation and therefore swelling of the throat.

Mental health conditions like anxiety can trigger the sensation that the throat is swollen. Typically this feeling arises when faced with a stressful situation and eases shortly thereafter. It accompanies other physical symptoms of anxiety such as difficulty breathing, palpitations and even chest pain. There is usually no physical or chemical irritation of the throat although people with severe acid reflux may find it worsen during periods of psychological stress.

People with eating disorders may have throat swelling for several reasons. In eating disorders where there is purging, like with bulimia, the act of inserting the finger or object into the throat to initiate vomiting can injure the delicate that lining. This can lead to inflammation. Vomiting then brings up stomach acid and strong digestive enzymes which can cause chemical irritation and damage to the throat tissue.