What are the taste buds?

The taste buds are the functional unit of the sense of taste. It is stimulated by certain chemicals in food and relays signals to the brain where it is perceived as the five taste sensations – sweet, salty, sour, bitter and . Odor (smell) and the texture of food can also alter the sense of taste. Apart from making the process of eating a more pleasurable experience and influencing the appetite, the sense of taste allows a person to select food base on the body’s nutritional needs.

The human tongue has between 3,000 to 10,000 taste buds. Each taste bud is about 0.03 millimeter in diameter and about 0.06 millimeter long. Children have the most amount of taste buds and after the age of approximately 45 years, many taste buds begin to degenerate.

Location of the Taste Buds

The taste buds are found on three types of tongue papillae :

The most numerous papillae on the tongue, filiform, do not contain any taste buds.

The taste cells have varying number of receptors that are stimulated by  several different elements and compounds, namely adenosine, chloride, hydrogen, inosine, potassium, sodium and glutamate. These chemicals will trigger the depolarization of the taste cell membrane. In addition there are specific receptors that detect bitter and sweet which indirectly trigger the depolarization by the action of  secondary messengers.

Below is a list of chemicals that are trigger certain taste sensations.

The human tongue can perceive hundreds of different tastes which are just variations of these five primary tastes.

Structure of the Taste Bud 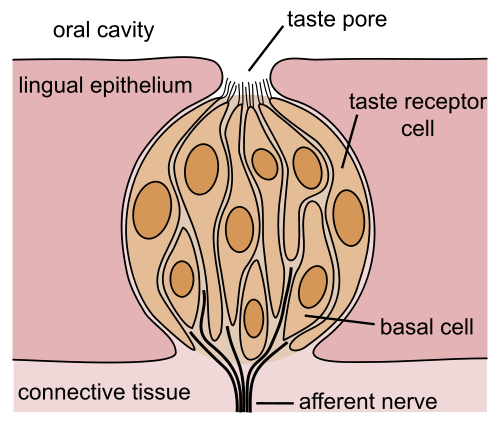 A taste bud is composed of specially modified epithelial cells known as taste cells (gustatory cells) which are surrounded by supporting sustentacular cells. The taste cells extend a number of small hair-like structures known as microvilli into a minute taste pore. These pores are the openings in the tongue that allow substances dissolve in the saliva to make contact with the microvilli.

How do taste buds work?

When stimulated, ion channels on the taste cell open thereby allowing positively charge sodium or hydrogen ions to enter. The inner surface of the taste cell membrane, which is negatively charged, is depolarized by the influx of positive ions. The extent of the depolarization corresponds to the concentration of the substance that stimulates the specific receptor.

Vesicles within the taste cells release neurotransmitters from its inner surface which stimulate the surrounding network of nerve fibers. This discharges impulses which travel to and stimulate certain areas of the brain. This allows for the perception of taste.

Initially the rate of discharge increases till it peaks within a fraction of a second. It then adapts and the discharge rate decreases but continues thereby passing a weaker continuous signal until the substance is removed or the receptor accommodates. This is the reason why initially tasting a substance elicits the most prominent taste which subsequently decreases in intensity.

Taste Centers in the Brain

Food and substances dissolved in the saliva enter the taste pores where it makes contact with the microvilli of the taste  (gustatory cells). This then triggers a depolarization of the taste cell membrane, a subsequent release of neurotransmitters and stimulation of the surrounding nerve fibers.

Signals from the nerve fibers of the taste buds travels via cranial nerves VII, IX and X to the tractus solitarius (gustatory area) located in the posterior brain stem. From here neurons transmit signals to the thalamus (ventral posterior medial nucleus). Third order neurons then carry signals to the postcentral gyrus in the parietal cerebral cortex (gustatory cortex).

Some taste signals that are transmitted into the thalamus trigger the salivatory nuclei which stimulate the salivary glands (parotid, submandibular and sublingual). This taste reflex is the reason for salivating when eating and why certain tastes trigger copious saliva secretion. 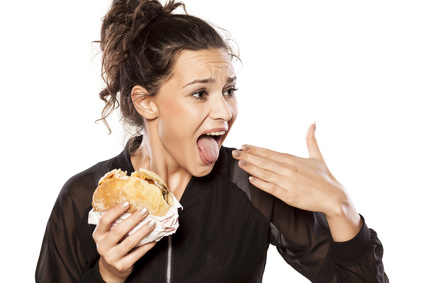 Taste also influences appetite – it can stimulate the hunger center and satiety center. It is also the reason for certain cravings, like when the body needs certain compounds, a person will crave for food high in these substances. To the person, the craving is associated with taste. To the body, the craving is associated with the need for acquiring the substance in question.