Tinnitus is the perception of a sound or noise, usually described as a ringing noise in the ears, in the absence of any external noise source (lack of acoustic stimulus). Tinnitus is often associated with the elderly but can affect younger persons, especially those exposed to excessively loud sounds (music) on a regular basis. In most cases of tinnitus is accompanied by hearing loss of varying degrees, mild to severe.

Tinnitus itself is not a disease but is a common symptom associated with many ear disorders.

Some sufferers may experience and describe more complex sounds as a combination of one or more sounds. The noise in the ears associated with tinnitus may also be described as :

In cases where the pulsating or beating noise can be heard by your doctor during examination, the cause may be linked to a bruit. A bruit is an abnormal sound of arterial blood flow usually heard by the sufferer or during auscultation (using a stethoscope) by the examining physician. A bruit is usually associated with vascular disorders like atherosclerosis, aneurysm, thromboembolism or certain physical abnormalities of the arteries or veins.

A bruit is a verifiable sign of a specific vascular disorder or abnormality and should not be confused with the symptom of a ringing sound in the ear associated with tinnitus.

Common complaints from tinnitus sufferers is that the ringing in the ears affects sleep, concentration when focusing on reading, studying or other mental activities and communication with others during a conversation. However some of these complaints may be due to associated hearing loss that accompanies many cases of tinnitus. Also refer to sudden hearing loss. 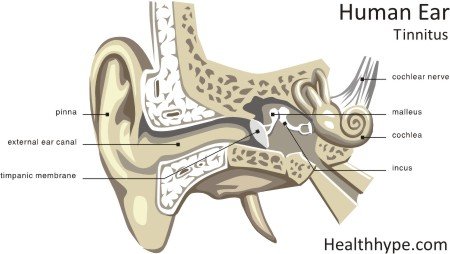 The exact cause and processes contributing towards tinnitus is unknown. However tinnitus is a symptom associated with many disorders including :

Diagnosis should focus on identifying possible causes of tinnitus as outlined above. This may involve a CT scan or MRI of the head, audiology tests and testing for sensory and neural (nerve) associated hearing loss. A cardiovascular examination and relevant tests should be conducted to identify or exclude cardiovascular causes of tinnitus. In cases of suspected drug induced tinnitus, the medication may be changed by your medical practitioner . If drug therapy is not essential, it may be stopped altogether to exclude drug induced tinnitus. The presence of concomitant symptoms like dizziness or vertigo with tinnitus may be indicative of an inner ear disorder.

Severe cases of tinnitus can be very disturbing for the sufferer and there is no known cure for tinnitus. Medical treatment should be directed at the causative factor if other disorders are diagnosed after further investigation. Conservative management should be the focus of dealing with tinnitus and self resolution is possible in certain cases, especially in young persons or noise induced trauma.