There are a number of different sexually transmitted diseases (STD’s) and sometimes these infectious diseases can be confused with each other. Although many people may not be as familiar with trichomoniasis as they are with other diseases like chlamydia and gonorrhea, it is one of the most common STD’s among young women in the United States and across the globe.

What is trichomonas infection?

Trichomonas infection is an infection with the parasite known as Trichomonas vaginalis. The disease caused by this infection is referred to as trichomoniasis. It can be cured but if left untreated, especially in pregnant women, it can lead to premature delivery, low birth weight and the baby can be infected during childbirth. Trichomoniasis has also been associated with infertility and abnormal cells on the cervix (cervical neoplasia).

Although trichomoniaisis is more common among women, it can also affect men. Usually men do not have any significant signs and symptoms. However, infected men are still able to spread the infection despite the lack of symptoms. Both partners should be treated simultaneously when one is diagnosed with trichomoniasis to prevent recurrence. This is difficult to achieve in people with multiple sexual partners.

Trichomonas is a genus of protozoa of which Trichomonas vaginalis is one species which causes the diseases trichomoniasis. Protozoa are single-celled parasites. Trichomonas vaginalis has flagella (tail-like projections) which allows it to move around. Once it has infected a person, the parasite can then move around the vaginal and urethral tissue. It can then travel higher up the genitourinary tract where it may reside for long periods and cause complications. 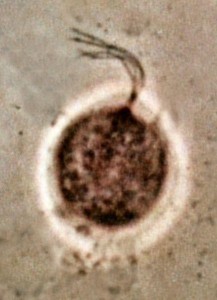 Picture of the Trichomonas vaginalis parasite

In women the parasite is found in the vagina, cervix, urethra, bladder, and Bartholin and Skene glands. In men, it is found on the external genitalia as well as in the prostate, epididymis and semen. Infections tend to persist longer in women and these parasites may be present in these areas for weeks and months. It is believed that it could also be present for years based on anecdotal evidence.

Trichomonas vaginalis is transmitted primarily through sexual intercourse. Depending on the type of intercourse, the Trichomonas parasite may also be found in the mouth and rectum. As with any sexually transmitted infection, the risk of contracting a Trichomonas infections is dependent on sexual behavior. Having multiple sexual partners and not using barrier protection like a condom are major risk factors.

Women are usually symptomatic while men are typically asymptomatic (without symptoms). However, women can sometimes be asymptomatic for long periods of time. The incubation period can vary from 4 to 28 days. During this period there is usually no symptoms. The infection is short term in men, lasting less than 10 days in  most men. In contrast, the infection persists longer in women and may even extend to months and years in asymptomatic women.

Trichomoniasis can be misdiagnosed if laboratory tests are not conducted. The signs and symptoms of trichomoniasis are not a reliable indicator of the infection. It can be diagnosed by microscopic examination of a sample of the vaginal discharge from women or urine from men. Newer rapid antigen tests are often preferred these days. Routine screening should be considered in high risk individuals who do not change their behavior.

Ideally a diagnosis of trichomoniasis should be confirmed after relevant tests before medication is commenced. The preferred antiprotozoal agent is metronidazole, especially for women. This drug is not considered to be teratogenic, meaning that it will not affect the fetal development in pregnant women. However, if pregnant women are asymptomatic, treatment may sometimes be delayed until after childbirth.

Note: Alcohol should not be consumed with or after taking these drugs as it can cause severe gastrointestinal disturbances.

Severe, long term and untreated trichomoniasis can lead to complications. The focus is often on pregnant women but the complications can also affect women who are not pregnant. With regards to pregnancy, trichomoniasis can result in low birth weight, premature delivery and the infection may be spread to the newborn as the baby passes through the birth canal.

Although trichomoniasis can be effectively treated with drugs, prevention is nevertheless important. Not only will it prevent recurrence of infection but it can also prevent other sexually transmitted infections, including HIV.