What is Trigeminal Neuralgia?

Trigeminal neuralgia starts with shorter, milder attacks but it soon changes into longer and frequent episodes of severe pain. The extent of pain is known to drive patients to the brink of suicide. The pain starts from trigeminal nerve and then spreads to the upper and lower jaws of one side of face. The pain may also cause a tic (facial spasm).

How Common is Trigeminal Neuralgia

Trigeminal neuralgia affects 3 out of every 20,000 people. In the US alone, nearly 15,000 cases are reported every year. Trigeminal neuralgia is more likely to occur in women than men, and it usually affects elderly or people over 50. The condition is often associated with multiple sclerosis. Nearly 1% to 2% of patients with one disease develop the other condition. Patients with both conditions often have facial pain on both sides. Apart from multiple sclerosis,  hypertension (high blood pressure) is a known risk factor for this syndrome. Given the prevalence of hypertension across the globe, this may also impact on the incidence of trigeminal neuralgia. 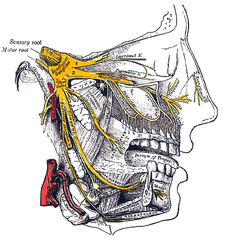 Picture of the trigeminal nerve anatomy from Wikimedia Commons

What Happens in Trigeminal Neuralgia?

The exact pathophysiology of trigeminal neuralgia is not clear. The trigeminal nerve is a sensory nerve that carries sensations like touch and pain from the face to the brain. It is one of 12 pairs of cranial nerves that arise directly from the brain without communicating via the spinal cord. As a sensory nerve, factors like damage and increased pressure on the nerve can result in pain.

The nerves have a protective covering called myelin, which is an insulator that also helps with the passage of nerve impulses. Loss of myelin (demyelination) can cause irregularities in the transmission of information. In some cases, it can amplify the sensory inputs. In such scenario, even the smallest stimuli can result in too much sensation. In trigeminal neuralgia, for example, a vibration can trigger an attack.

The trigeminal nerve is the fifth cranial nerve (CN V) and has three major branches : 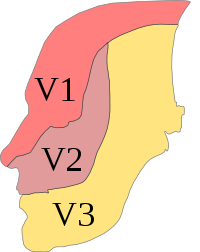 Picture of the trigeminal nerve branches from Wikimedia Commons

Therefore symptoms may be more prominent in these areas depending on which branch of the trigeminal nerve is affected. Usually only one trigeminal nerve is affected although both sides can be affected simultaneously. The maxillary and mandibular branches are the most commonly affected therefore the symptoms are mainly located in the regions supplied by these branches. For some unknown reason, the right side of the face is more frequently affected than the left.

Symptoms of trigeminal neuralgia may include the following:

Attacks increase in frequency and intensity over time. There are contortions of the face of expressions during an attack. During attacks, patients may frown, grimace, or make sudden head movement to bear the pain – this results in tics.

Prolonged use of anticonvulsants or anti-spasm medicines for treating trigeminal neuralgia can produce side-effects and toxicity. Over years the medicines may also become less and less effective. In such cases a new anticonvulsant is prescribed, which may inadvertently produce more side-effects.

Trigeminal neuralgia can cause depression and may affect quality of life in patients. In severe cases, the pain may lead to suicide.

Treatment of trigeminal neuralgia mainly involves the use of certain medicines. Other options such as surgery are considered when the medicines either become ineffective or start producing side effects.  However, even surgical intervention in long term cases does not preclude the use of medicines for a prolonged period thereafter.

Trigeminal neuralgia may resolve spontaneously after a few months and remain in a state of remission for a period of time. However, it tends to recur more frequently and intensely in the future and medication may offer limited effectiveness in the long term.

Drugs aim to reduce or block the pain signals sent to the brain. Anticonvulsants like carbamazepine, oxcarbazepine, lamotrigine, phenytoin, and gabapentin are commonly prescribed for trigeminal neuralgia. Though these drugs are effective, they may cause side effects like dizziness, drowsiness, confusion, nausea, and double vision.

Surgery aims at removing or easing the pressure or mechanical irritation of the nerve.