What is Ovarian Cancer?

Ovarian cancer is cancer that develops in the ovaries, the two small organs on either side of the uterus, which produce ova (eggs) as well as secrete the female hormones estrogen and progesterone. Ovarian cancer is mainly seen in post-menopausal women but it can occur at any age. Although rare, more women die from ovarian cancer than from uterine cancer and cervical cancer put together because it usually causes few symptoms in the early stages. Those symptoms that do develop are often vague and may mimic those of digestive disorders, such as abdominal pain, discomfort or distension, and are likely to be overlooked.

There are different types of ovarian cancers but the three main types are :

These are all primary tumors of the ovary, originating in the ovary itself. Secondary tumors may occur in the ovaries from spread of cancer from different organs of the body. The most common primary cancers that metastasize to the ovary are cancers of the breast, uterus, stomach, and colon.

Although the exact cause of ovarian cancer is not known, a faulty genetic factor has been linked to ovarian cancer, namely mutations in BRCA1 and BRCA2 genes. The process of developing cancer is further explained under what is cancer and benign vs malignant tumors. A combination of surgery and chemotherapy is the usual choice of treatment. The role of radiation therapy in the treatment of ovarian cancer is limited, but it may be considered in selected cases.

The ovaries are a pair of small, oval shaped organs, about 2.5 to 5 cm in length, situated in the pelvis, close to the pelvic wall and on either side of the uterus. The upper part of the ovary lies close to the fimbriated end of the fallopian tube. It is usually pinkish-grey in appearance with a rough, uneven surface, and areas of scar tissue.

The ovary is suspended by means of 3 ligaments – the mesovarium, the suspensory ligament of the ovary, and the ovarian ligament. The ovary is covered by low columnar epithelium and consists of the outer cortex and the inner medulla. The medulla is composed of connective tissue fibers, muscle cells, lymphatic and blood vessels, nerves, and supporting tissue. The cortex is made up of the stroma with many vessels and scattered follicles of epithelial cells within it.

The follicles contain ova or eggs in various stages of maturity. The more mature follicles, known as the Graafian follicles, enlarge and project on to the surface of the ovary. When a Graafian follicle becomes fully mature, it bursts to release the ovum. This is known as ovulation. The remains of the Graafian follicle is known as the corpus luteum, which is eventually replaced by scar tissue, which may be seen on the surface of the ovary. If the ovum gets fertilized by a sperm, it forms the embryo, which eventually develops into the fetus. 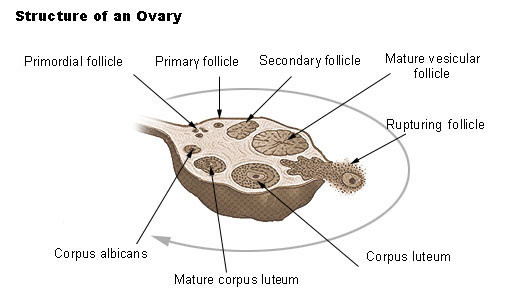 The ovaries are also responsible for producing and secreting the female hormones estrogen and progesterone. These hormones are responsible for the development of sexual characteristics in a woman, as well as regulating menstruation and pregnancy. During and after menopause, the ovaries stop producing eggs, and hormone production also decreases.

When cancer cells break off and spread to other parts of the body, it is known as metastasis. In ovarian cancer, metastasis may occur in the following ways :

Ovarian cancer can be divided into 3 major categories based on the type of cell from which it arises. This includes :

These are primary carcinomas of the ovary, which originate in the ovary itself.

The other type of carcinoma that may be found in the ovary is known as secondary or metastatic carcinoma. Here, the primary cancer is elsewhere in the body but it has metastasized to the ovary.

Epithelial ovarian carcinomas make up nearly 90% of all ovarian cancers. It occurs more frequently in older women and is derived from the surface epithelial cells of the ovary. It can be subdivided into :

Germ cell cancers arise from cells that produce ova or eggs. This type of cancer occurs most commonly in young women and may have a better prognosis than epithelial tumors. The different types of germ cell cancers include :

These tumors arise from connective tissue cells of the ovary. It may be subdivided into :

Metastatic tumors may account for as many as 25% of all ovarian cancers. These are cancers that have spread to the ovary from primary sites in other parts of the body, most frequently from the breast, uterus, stomach, and colon. These tumors are usually bilateral and the signs and symptoms are similar to those of primary ovarian cancer. Carcinoma of the stomach that has metastasized to the ovary is known as Krukenberg tumor.

Repeated ovulation provides opportunities for cell mutation following repeated disruption of the epithelium (by rupture of the Graafian follicles as it releases an ovum) as well as activation of cellular repair mechanism during and after ovulation. This theory is substantiated by observations that the following conditions protect against ovarian cancer.

However, ovulation is a normal part of the menstrual cycle and should not be interrupted as a means of protecting against ovarian cancer.

The role of genetic factors in ovarian cancer is undisputed. Many observations support this fact, such as :

It has been suggested that long term use of clomiphene citrate, a fertility drug, may increase the risk of ovarian cancer. This drug promotes ovulation and may therefore be a factor as discussed under repeated ovulation above.

A nulliparous woman is a woman who has never had children. This appears to be a risk factor for developing ovarian cancer. Conversely, multiple childbirths seems to offer protection against ovarian cancer.

Increased fat consumption has been associated with development of ovarian cancer. For this reason, obesity may be considered as a risk factor.

The presence of talc granulomas in ovaries of patients who have not been operated upon previously has led to the hypothesis that women who place talcum powder on their external genitalia run the risk of developing ovarian cancer. This theory is yet to be substantiated, although the fact remains that talcum powder, as a foreign body, can be considered carcinogenic – a substance that is capable of causing cancer.

Hysterectomy (removal of uterus) or tubal ligation (surgery for permanent closure or tying of the fallopian tubes) may decrease the risk, possibly by preventing foreign bodies from entering through the vagina and reaching the ovaries.

Women on long term HRT using estrogen alone (without progesterone) may be at risk.

Radiation to the pelvic area may be a risk factor. This may be seen with treatment of malignancies in the lower abdomen and pelvis.

Endometriosis may be a very rare risk factor for ovarian cancer.

Ovarian cancer is usually diagnosed late since it develops insidiously, with very few warning signs or symptoms. Even when present, the complaints are often so vague that it is invariably mistaken for gastrointestinal symptoms. Abnormal vaginal bleeding may be the only gynecological problem.Even so, ovarian cancer is usually not the first diagnosis to be considered in women with such symptoms. This is further compounded by the lack of good screening methods for detecting ovarian cancer in the early stages. Unfortunately, this delay in diagnosis usually costs the patient in terms of treatment and management.

The symptoms of ovarian cancer may be develop over several months. The common symptoms are :

Staging indicates the degree of spread of the cancer. This helps to indicate the prognosis and determines the type of treatment that is to be undertaken. Surgical staging may be done at the time of surgery if the cancer appears to be confined to the pelvis. The excised uterus, fallopian tubes, ovaries, lymph nodes and other abdominal tissues are examined for macroscopic signs of cancer and are sent to the laboratory to be examined under the microscope for cancer cells. Imaging tests such as CT scan and MRI can determine the spread of disease and help in staging of ovarian cancer.

The cancerous growth is present in one or both ovaries, with pelvic extension. This means that the cancer has spread beyond the ovaries to other tissues and organs in the pelvis, such as the fallopian tubes or uterus, but is confined to the pelvis. Cancer cells may be present on the surface of one or both ovaries, in the ascitic fluid or in peritoneal washings.

The cancer is present in one or both ovaries. It has spread beyond the ovaries and the pelvis (cancer cells may be found on the liver surface), or to the regional lymph nodes (retroperitoneal or inguinal nodes).

The cancer is present in one or both ovaries, with distant metastasis to the liver parenchyma (deeper structures of the liver) and lungs. Cancer cells may also be found in the pleural effusion fluid.

Recurrent ovarian cancer refers to cancer that has returned after complete remission following initial therapy. Typically, recurrence of ovarian cancer occurs within a few months or years, but in some cases it may come back after many years. Patients with advanced disease (stage 3 or 4) are more at risk of recurrence after treatment than those with early stage disease. Cancer that persists during and following treatment is known as persistent ovarian cancer.

Grading is done by examining the cancer cells under the microscope and determining how different or abnormal it is from normal cells. Grading helps in deciding upon the treatment as well as indicating the outlook of the disease.

These are non-invasive tumors with low malignant potential (LMP). It is also known as a borderline tumor.

Also known as low grade tumors, the cells are slightly abnormal but look more or less similar to normal ovarian cells. It is described as ‘well differentiated’. These types of cancer cells are slow-growing and less aggressive than the other grades.

These cells are slightly more abnormal than grade 1 cells and are known as middle grade tumors.

These cells are clearly abnormal and described as ‘poorly differentiated’. The cancer cells are rapid-growing and are more aggressive. It is known as a high grade tumors.