Immunization programs across the globe have effectively reduced the risk of serious infections, lifelong disability and even death from certain dangerous microorganisms. Prior to the development of vaccines, many of these infectious diseases were decimating large portions of the population during outbreaks and contributing to early death.

Vaccines are often not given the credit for being one of the miracles of modern medicine, in the way that antibiotics are given recognition. But vaccines have played a significant role in prolonging human life. While there is no denying that vaccines are a lifesaver, it is not entirely without side effects. It is uncommon but vaccine side effects can be serious and sometimes even deadly.

How Do Vaccines Work?

In order to understand why vaccine side effects arise, it is important to first know how vaccines work. Vaccines in a way “program” the body’s immune system. It introduces the whole microbe or a part of it into the body in a very small dose. This allows the body’s defenses, namely the immune system, to develop the necessary mechanisms to recognize the microbe in the future, target it and destroy it quickly before the microbe can thrive within the body to cause a serious illness. 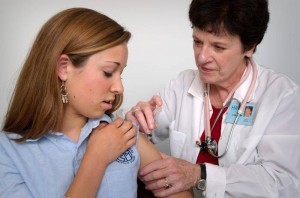 The key to this search and destroy mechanism is the substances that make up the microbe. It may be the outer layers of the virus or bacteria, the genetic material within it or sometimes even the whole microbe that has been weakened. Toxins may also be used. When the body comes into contact with these foreign substances, known as antigens, it will form corresponding antibodies. These antibodies then circulate in the body and should it ever encounter the specific antigen again, the antibodies will bind to the antigens.

This antigen-antibody complex will then be able to guide the immune response promptly. So vaccines work by helping the immune system form antibodies to these microbes ahead of time when it is still healthy. It is these antibodies that are the lasting protection.

There are various different vaccines depending on the type of microorganism for which the vaccine is designed, the way the immune system responds to it and the possible side effects.

DNA vaccines and recombinant vector vaccines are relatively new and still largely in the experimental stages. Live vaccines need to be refrigerated to remain potent and cannot be given to people with weakened immune systems. Inactivated vaccines are more stable and safer than live vaccines but may require booster shots to maintain immunity which is not always possible.

Risk of Side Effects

The risk of side effects from vaccines vary depending on the type of vaccine, microorganism involved, the individual’s immune system and the way a vaccine is stored and handled. The major factor remains the individual’s state of health and sensitivity. A relatively safe vaccine that is unlikely to cause side effects in most people can have very serious side effects in a minority of people who are immunized with it. Sometimes the risk is so minimal that it is practically considered to be negligible.

It is never wise to refuse necessary vaccines based on an unrealistic and irrational fear of side effects. Some infectious diseases that were almost eradicated globally have seen a small resurgence in recent years due to myths and misconceptions about vaccine side effects. This has been largely isolated to certain regions of the world. There have been scandals about tainted vaccines but it is often detected early and limited to small batches. Vaccines can have mild, moderate or serious side effects but it is always important to weigh out the benefits compared to the risks before refusing a vaccine. 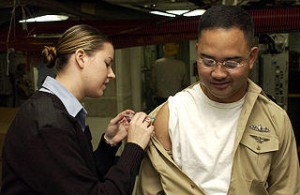 People living with HIV and AIDS, or a person with a weakened immune system for any other reason should be cautious with certain vaccines. It is important to inform the health care professional administering the vaccine about your pre-existing illnesses to avoid serious side effects from taking the vaccine.

Most side effects from vaccines fall within the mild category. It is uncommon but still more frequently seen than moderate to severe side effects. Mild side effects include:

Fever, a rash, bruising and tenderness/soreness at the site of the vaccination are common side effects of most vaccines. The other mild side effects may vary depending on the type of vaccine and the target microorganisms being vaccinated against.

These are less common side effects of vaccine and can be sometimes a prelude to more serious side effects that will arise a short while later. It includes:

Seizures, wheezing and fainting spells can have serious complications among some people. It largely depends on the intensity of these symptoms and the situation a person is in when these symptoms arise, for example having a seizure while driving a car.

These side effects may include:

Many of these serious side effects are so rare that it is not as conclusively known whether it arises due to the vaccination or for some other reason that has not as yet been ascertain.

Read more on the possible side effects from specific vaccines on the CDC.gov website.