Vertebral artery dissection (VAD) is a condition where blood collects within the walls of the vertebral artery and hampers blood flow through it. Since the vertebral arteries carry oxygen rich blood to the brain, most symptoms are a result of reduced blood flow and oxygen supply to the brain. It can even lead to a stroke. Vertebral artery dissection is one of the most important causes of a stroke in people younger than 45 years of age. Most cases arise with injury, where trauma to the vessel wall compromises its integrity and allows blood to collect within it. Sometimes however, this can arise spontaneously with no previous history of head or neck trauma.

Origin of the vertebral arteries 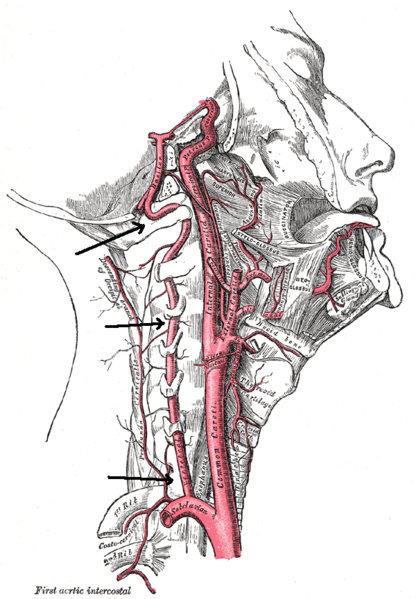 Course of the vertebral arteries

Based on its course, the vertebral artery can be divided into four different segments.

The most frequent location of a vertebral artery dissection is in segment IV, particularly with trauma. In a spontaneous dissection, the most commonly affected site is segment III although it may extend to segment IV. 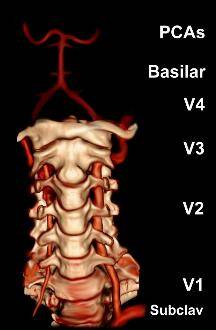 Arteries have thick walls to withstand the high pressure of blood rushing out of the heart. The arteries are both elastic to stretch as necessary and have muscles in its walls that can contract or relax to alter the amount of blood flowing through it. In order to cater for these different properties, arteries have several different layers. The innermost lining is the tunica intima. The middle layer is the tunica media and the outermost layer is the tunica adventitia.

Normally all layers of the artery are intact. There are no kinks (sudden narrowings) or protrusions from the artery walls. Blood flows rapidly and smoothly within the artery. A dissection may arise when :

A collection of blood is known as a hematoma. It is a space-occupying lesion. A very small hematoma can cause no symptoms. However, when it is large then there are several possible consequences such as :

A vertebral artery dissection can be classified into traumatic or spontaneous.

In this instance the dissection arises with trauma. The injury, either blunt force or sharp (penetrating), may be isolated to the head or neck or affect several site sin the body. It is most commonly seen with :

A spontaneous dissection is a category for any verterbral artery dissection that arises without previous trauma. In most instances there is some inherent defect that has led to weakening of the wall. Sometimes it is minor trauma that has occurred in the past but remains unnoticed for weeks or months. It is rare for a spontaneous dissection to occur with no predisposing cause. A careful medical history will often reveal a cause or risk factor.

Being female is a major risk factor, and women are three times more likely to suffer with a vertebral artery dissection.

The symptoms largely depend on which part of the brain or brain stem is affected by the reduced blood flow or to some extent the compression of the enlarged vessel on the nerve tissue. The major symptoms includes :

Other symptoms may not always be reported by patients at the outset or if it is mild. There may be a latent period of 3 days where the first symptoms like head pain starts with other symptoms only occurring after 3 days.

Reporting of symptoms and the presence of signs mentioned above along with a medical history indicating a possible cause or risk factor should raise the suspicion of a vertebral artery dissection. This is more significant in a person younger than 45 years of age, where stroke-like symptoms are evident. However, further investigations are usually warranted such as :

This is considered the gold standard for vertebral artery dissection which means it conclusively diagnoses the condition and can identify the affected site. It involves inserting a catheter into a large artery and positioning it in the aorta. Radiocontrast dye is then injected. Through fluoroscopy, the blood flow through the vertebral arteries can then be visualized on x-ray images.

Depending on the symptoms present, the patient needs to be rushed to the emergency room or the stroke department. The first measure is to stabilize the patient. Treatment focuses on clearing the clot and preventing new clot formation with the use of medication. High blood pressure is not reduced when found at the time of admission as the higher than normal pressure allows some blood to pass through an occlusion and nourish the brain tissue.

Medication to treat the blood clots include :

The outlook is much more positive if the dissection occurs in the parts of the vertebral artery outside the skull (extracranial). Close to 90% of these patients will have a complete recovery but are at risk of strokes at a later stage. When the part of the vertebral artery within the brain is affected then the outlook is poorer. There is a greater likelihood of complications and a higher chance of death.