Appendicitis is a condition that can affect any person at any time. In fact it is one of the most common causes of abdominal pain and removal of the appendix is one of the more common abdominal surgeries performed in the United States. Appendicitis is often thought of as a condition of childhood but this is untrue. It affects teenagers and young adults more commonly. However, serious complications of appendicitis are more likely to occur in younger children. The main complications occur when the appendix bursts (ruptured/perforated appendix).

It is important to understand some basic points about appendicitis. The vermiform appendix as it is more correctly known is a long pouch that extends from the cecum. Therefore the appendix is also known as cecal appendix. The cecum is the first part of the colon located at the lower right side of the abdomen. Appendicitis is a condition where the appendix is inflamed. It usually happens when the opening of the pouch becomes obstructed or if the appendix becomes infected. Appendicitis is treated by surgically removing it. Even if the appendix is found to be normal during surgery, it is still removed.  Non-surgical treatment is only considered when suitable facilities and skills for surgery are not available. 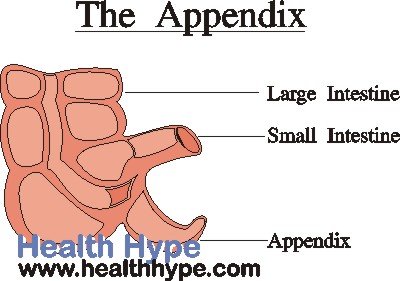 A burst appendix is the main concern of both the doctor and the patient. It can lead to death. A burst appendix allows the contents of the intestines to leak out into the abdominal cavity. The intestines are teeming with bacteria and digestive juices which can irritate and damage tissue. While the intestines can deal with the bacteria and digestive juices internally, the other organs and tissues of the abdominal cavity cannot. Not every case of appendicitis will lead to a perforation. And sometimes appendicitis can resolve on its own. But you still need immediate medical attention.

In acute appendicitis, the discomfort first starts as an ache around the navel or sometimes in the upper middle part of the abdomen. There is tenderness when pressing around the lower right side of the abdomen. Over a few hours the pain becomes worse and is typically sharp in nature. The location of appendix pain is in the right lower quadrant (RLQ) of the abdomen. The pain is worse when walking around, taking deep breaths, coughing or sneezing. When the appendix bursts, the pain and abdominal tenderness becomes very severe. But sometimes a patient may experience a relief of pain and only after that the severe pain sets in. Pain alone is not an indication of a burst appendix as it is largely subjective symptom. It must be considered along with other symptoms.

Nausea is one of the common symptoms of acute appendicitis. It starts early, usually around the same time as the ache around the navel. There may also be vomiting. The nausea and vomiting may pass after a few hours. When the appendix bursts, the nausea may return and is quite intense. Vomiting may also start up again. Both the nausea and vomiting that return may in this case be a sign of peritonitis, and not just appendicitis. It usually correlates with the severe abdominal pain in the RLQ. Since the classical symptoms of appendicitis are not present in over 50% of cases, it is also not a reliable indicator on its own of appendicitis or a burst appendix.

Fever is one of the later symptoms of appendicitis. It is typically low grade in acute appendicitis. However, the fever may start rising once the appendix bursts. The fevers can be as high as 102 F (38.9C) or sometimes even higher. The initial low-grade fever may resolve at times as does the pain, and a high fever suddenly sets in within 24 to 48 hours. However, the low-grade fever can rapidly progress to a high fever without any interruption in between. The patient may also experience chills (shivering) when the high fever begins to develop. A rising fever is a very serious sign even if other symptoms may seem to be stable or even easing.

A ruptured appendix means that bacteria within the bowels enter the otherwise sterile abdominal cavity. It can cause infectious peritonitis. But the bacteria can also enter the bloodstream and lead to sepsis which is life threatening. The high fever is one of the symptoms of sepsis along with a very rapid heart rate (more than 90 beats per minute) and rapid breathing (more than 20 breaths per minute). As the condition worsens, the patient experiences major difficulty in breathing, urine output decreases significantly and the person’s mental status is altered. All of these symptoms accompanied by a blood pressure that drops to very low levels is an indication of septic shock.

The Hidden Signs In Kids

Young children may not be able to express their symptoms as accurately as teens and adults. Even older patients may have difficulty expressing their symptoms. This can create confusion for caregivers and even the doctor. Most importantly, the typical symptom of pain may not seem as obvious. Neither can kids localize the pain to the right lower abdomen as accurately as adults do. They may not even be able to define the sensation as pain. Instead changes in nausea and vomiting, a rise in the fever and signs of sepsis or even septic shock need to be observed. In addition the child may be irritable, restless and pale in color with abdominal swelling and tender – sometimes no other symptoms may be present.