Cigarette smoking is one of the most dangerous lifestyle habits yet in 1 in 5 American adults are smokers. Fortunately the number of smokers has declined since the 1970s but cigarette smoking continue to be a major contributor to a host of diseases, several of which are life threatening. Understanding how cigarette smoking can harm you, and even kill you, is important for every person – whether you are a smoker or live and work with a smoker. The reality is that even if you think it may not happen to you as a smoker, you should at least be aware of what cigarette smoking may be doing to you, your family and your colleagues.

All too often we think that we know it all about smoking. After all, the media has constantly exposed us to the dangers about cigarette smoking. But knowing about the dangers and understanding how it affects your life are two different things. The first and foremost point that you need to accept is that cigarette smoking can and will kill you – in time. It is not the effects of nicotine that are the most detrimental to your health. It is the thousands of other chemicals that you inhale and your body absorbs from cigarette smoke that are the more likely killers.

Here are a list of some of the other chemicals that you inhale when you smoke a cigarette, apart from just nicotine:

You know many of these dangerous compounds but you do not realize that it also exists in cigarettes. For example: acetylene is the fuel that is used for welding torches, methanol is wood alcohol that is dangerous to drink, cyanide is the potent poison that is often portrayed as quick killer in spy movies, carbon monoxide is the toxic gas from your car exhaust fumes that people sometimes used to commit suicide and formaldehyde is the toxic embalming fluid used to preserve dead bodies. 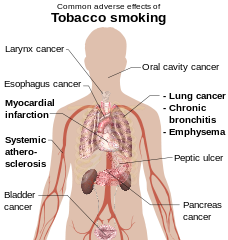 It is these chemicals, or a combination of the chemicals, that are ultimately the biggest danger in cigarette smoking. It destroys the tissue lining the mouth, airways and lungs. It reduces the oxygen-carrying capability of your blood and “sucks” out oxygen from your body. It promotes the development of cancer. And it damages your DNA leading to a host of deformities in children.

We will look at some of the main ways in which cigarettes will kill you. In fact many smokers who you may know of probably died from the effects of cigarette smoking. But it is the disease that is listed as the cause of death and not cigarette smoking which is the major cause or risk factor. The fact is that had these people not been smokers, there is a possibility that they would not have died from these diseases.

Cancer is probably one of the biggest concerns for cigarette smokers and their loved ones. But it is by no means the only condition that can kill you as a cigarette smoker. Many of the thousands of chemicals in cigarette smoke, some of which have been listed above, are carcinogens. This means that these chemicals can cause cancer. It does this by affecting the genetic material of cells that control growth and may even promote abnormal growth.

In addition, cigarette smoking suppressed the immune system. The body’s natural defenses are not only protecting you against foreign invaders like microbes. It also searches out and destroys cancer cells in the body. The combination of carcinogens and immune suppression with cigarette smoking greatly increases the risk of cancer. In fact, it has been accepted globally that cigarette smoking causes cancer. The reason why some smokers may develop cancer and others do not is unknown. But it may in part be related to the quantity of cigarettes you smoke in a day.

Types of Cancers Caused by Cigarettes

Contrary to popular belief, cigarette smoking does not only cause cancer of the mouth, throat, respiratory passages and lungs. These areas are more likely to be affected because the cigarette smoke makes direct contact with these areas. But the substances in cigarette smoke are ultimately absorbed into the bloodstream and circulated throughout the body. Therefore cigarette smokers are at a higher risk of developing cancer anywhere in the body.

Smoking has a wide range of effects on the cardiovascular system (heart and blood vessels). It is more likely to be fatal when it involves the heart, the small arteries supplying the heart (coronary arteries) and the arteries supplying the brain. However, it can be equally dangerous when the aorta is weakened and begins to bulge (aortic aneurysm) since there is a risk of a rupture. It may also be life threatening when the legs are affected as a clot that forms in the leg vessels may break off and block the vessels carrying blood to the lungs (pulmonary embolism).

Cigarette smoking increases the risk of atherosclerosis, which is the build up of fatty plaques in the wall of arteries. It is further complicated by hypertension (high blood pressure) which may be directly related to cigarette smoking. Gradually these arteries narrow until it becomes fully blocked. The most common life threatening events related to arterial occlusion is a heart attack (myocardial infarction) or stroke (cerebrovascular accident). A range of cardiovascular diseases, which may be a consequence of cigarette smoking, may eventually lead to heart failure.

Chronic bronchitis and emphysema are the two most widely known respiratory diseases associated with cigarette smoking. These conditions are are permanent and gradually compromises the respiratory functions. Chronic bronchitis affects the two tubes that branch off from the trachea and lead to the lungs. It becomes permanently inflamed, with excessive mucus production. In emphysema, the air sacs of the lungs are slowly destroyed. This reduces the surface area for gas exchange in the lung making it progressively more difficult to breathe.

Other Diseases Caused By Cigarettes

Although the ill effects of cigarette smoking often focuses on cancer, heart and respiratory diseases, there are a host of other conditions that may also occur. These conditions are either less common and usually not fatal so it does not receive the same attention as the conditions mentioned above. However, these condition still adversely affects a person’s quality of life, increases the risk of chronic conditions and may contribute to a host of psychiatric disorders like depression.

People who smoke are at a greater risk of developing diabetes mellitus than non-smokers. This is not a widely known fact among smokers. Diabetes mellitus has rapidly risen to become one of the major contributors to life threatening conditions. Apart from its association with diabetes, cigarette smoking may also increase the likelihood, hasten the onset and worsen the severity of diabetic complications. For example, diabetic nephropathy (diabetes kidney disease) may be significantly worse in the backdrop of hypertension and narrowing of the renal artery – two consequences of smoking.