The nerves are the communication lines of the body. It has to work efficiently to ensure that messages are transported throughout the body for the system to function. Sometimes nerves become diseased or damaged in various ways, or malfunctions despite the nerve structure being intact. When this happens, then the communication to or from a specific part of the body is impaired. It can lead to a myriad of symptoms and affect functioning in different ways. This is sometimes referred to as weak nerves.

The Basics About Nerves

The nerves as we know it are made up of many smaller components. Nerves are composed of bundles of fibers. These fibers in turn are made up of thousands of nerve cells (neurons). Neurons transmit impulse along its length as an electrical signal. When the signal has to jump from one neuron to the next, it is transmitted as a chemical signal. These chemical signals are known as neurotransmitters. 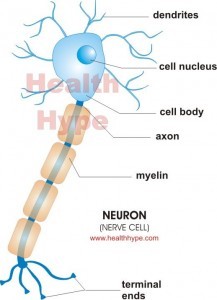 Signals to the brain (along afferent fibers) carries information perceived at different parts of the body. There may be different types of sensory information collected, like temperature and pressure. The afferent nerves that relay this information back to the brain are therefore also known as sensory nerves.

A nerve containing both sensory and motor fibers is therefore referred to as a mixed nerve.

What are weak nerves?

‘Weak nerves’ is a common way of describing nerve dysfunction. The correct medical term is neuropathy. There are many ways to describe and classify neuropathy. However, the underlying meaning of weak nerves or neuropathy is that these nerves are diseased or damaged in some way, or cannot function properly for some reason. As a result nerve signals cannot be transmitted along the nerve. If a sensory nerve is affected the sensation is impaired. If a motor nerve is affected then movement is compromised.

The term weak nerves is also sometimes used to describe mental health conditions where anxiety and nervousness are the predominant symptoms. This falls within the ambit of psychology and psychiatry rather than neurology. However, there can be some degree of overlap. Some types of nerve diseases can cause psychiatric manifestations where anxiety and nervousness may be present. In general terms though and for the purpose of this article, weak nerves specifically relates to disease, damage and dysfunction of peripheral nerves primarily.

There is no specific medical condition that can be described a weak nerves. It is a colloquial term used to describe nerve dysfunction, damage or sometimes even muscle problems. There are many nerve and muscle conditions where such problems may be present. Unlike muscles, nerves cannot be strengthened by physical activity. Sometimes signals, which are essentially electrical impulses, are not properly transmitted through a nerve. In these cases the nerve is not weak as such but either damaged or dysfunctional.

As mentioned, the problem does not always lie with the nerve. Sometimes the muscle is a problem and despite the nerve signals reaching it, the muscle cannot function properly. At other times the receptors (like temperature, pressure or pain receptors) do not elicit the right signals which can then be carried by the nerve to the brain although the length of the nerve is intact. While classifying nerve dysfunction or damage as weakness may not be entirely incorrect in non-medical terms, it does not always properly express the underlying problem.

Neuropathy is classified in several ways, including the type of nerves affected, the nature of the nerve disease/damage, the location of the specific nerves involved or the part of the nerve that is abnormal.

Sometimes the nerve disease may also be described according to the predominant symptom, like neuralgia which indicates pain due to nerve dysfunction, damage or disease. Neuritis is another term that is widely used and simply means nerve inflammation.

Most nerve problems are due to:

There is some degree of overlap with these problems. For example long term pressure on a nerve can injure it (neuropraxia). However, these different mechanisms of nerve problems will be discussed separately to gain a greater understanding of the type of nerve conditions that exist. The causes of nerve problems that may be described as “weak nerves” varies. Sometimes it is due to abnormal stretching of the nerve, pressure on it, cutting of the nerve, when an infection or drug irritates the nerve or when the immune system attacks the nerve.

The causes of neuropathy can vary, depending on the the type of disease. It can be due to:

Sometimes the cause of the nerve problem cannot be identified. It is then referred to as idiopathic.

There are hundreds of neurological conditions that may be described as ‘weak nerves’. The exact cause of some neurological conditions are unknown even when the type of disturbance can be identified. Sometimes the mechanism of the nerve weakness is unclear and so is the cause. There are instances where anxiety or other mental health conditions are also described as ‘weak nerves’.  Here are some of the different nerve-related conditions and the type of disturbance that causes it.

Sciatica is one example of nerve root compression. In sciatica the nerves that branch from the lower back to form the sciatic nerve may be pinched due to a herniated disc or when bony protrusions from the vertebrae press against it. The nerve can also be pressed upon by a tumor. Symptoms include pain, numbness, tingling and muscle weakness which occurs along its path, across the buttock and down the legs.

Multiple sclerosis (MS) is an autoimmune condition where the immune system attacks the insulating layer (myelin sheath) around the nerves. The loss of this protective layer affects the transmission of nerve impulses and with time the nerve degenerate. Symptoms include pain, numbness, tingling, muscle weakness, loss of function (like visual disturbances or slurred speech), tremors and fatigue.

Diabetic neuropathy is nerve damage that occurs with long term and uncontrolled diabetes mellitus. The elevated blood glucose levels gradually damages the nerves and compromises its normal functioning depending on the nerve that is affected. Symptoms therefore vary. Common symptoms include pain, numbness, tingling, burning sensation and muscle weakness. There may also be loss of balance and coordination, slow reflexes, constipation, erectile dysfunction, bladder problems and disruptions in temperature control.

Bell’s palsy or facial palsy is a condition where nerve inflammation affects one side of the face thereby leading to muscle weakness of the affected side. The exact cause of the inflammation is unknown but it appears to be linked to a reaction to a viral infection. In most cases it is acute and sometimes requires little to no treatment but will resolve spontaneously. Symptoms include one-sided facial paralysis, facial droop, drooling, impaired taste sensation and alterations in tear and saliva production.

A stroke is a condition where a portion of the brain tissue dies due to an interruption in the blood supply to the brain. The main way this occurs is when a blood clot blocks an artery carrying blood to the brain (ischemic stroke). It can also occur when a blood vessel to the brain ruptures (hemorrhagic stroke). Since various control centers in the brain are affected, the symptoms can vary. One-sided paralysis of the body is among the common complications.

Parkinson’s disease is a neurodegenerative disorder where there is gradual loss of certain types of nerve cells in the brain. The specific nerves that are affected are those that produce a chemical messenger known as dopamine. The reduced levels of dopamine impede normal nerve function which leads to abnormal brain activity. Symptoms include tremors, slow movements, rigid muscles, disturbances in reflexes and alterations in posture and balance among other symptoms.

The symptoms of neuropathy depends on whether it is sensory, motor or mixed nerves that are affected. Damage, disease or dysfunction of mixed nerves will present with symptoms of both sensory and motor nerve diseases.

The other symptoms that occur depend on the disease itself. It may not specifically be related to the nerve problem that is present. Another factor to consider are the nerves in the brain. Due to the number of nerves and complexity of connections, problems with the nerves in the brain can give rise to additional symptoms such as memory problems, learning and cognitive difficulties, impaired sensation and so on.