Polyps are outgrowths of tissue from the mucosal surface of a cavity. These growths are not unique to the small and large intestine and may be see anywhere in the gastrointestinal tract like esophageal and stomach polyps and also occurs within other cavities like nasal polyps in the nose and uterine polyps in the uterus.

What are intestinal polyps?

Intestinal polyps are protrusions from the mucosal surface of the intestine into the lumen. Most polyps are seen in the colon. Polyps are overgrowths of tissue and may extend along the mucosal surface (sessile) or protrude outwards into the lumen with a stalk (pedunculated). An intestinal polyp may be single or multiple and can vary in size from a few millimeters to several centimeters.

Adenomatous polyps (colorectal adenomas) are fairly common and may occur in up to 50% of people over the age of 60 years. Only 10 to 20% of these polyps will become malignant. Adenomas can be classified by its shape – villous, tubular or tubulovillous. As the name suggest, villous adenomas are growths with multiple projections due to folding of the surface, similar to the villi seen in the small intestine. Villous adenomas secrete large quantities of mucus similar to the surrounding intestinal epithelium.

Pure villous adenomas are relatively rare and account for less than 5% of adenomas. These adenomas are usually sessile cauliflower-like mass, mostly confined to the sigmoid colon and rectum. Villous adenomas which are larger than 4 cm size are often associated with severe dysplasia and has a high risk of cancer. About 40% of these lesions eventually develop cancer.

Also known as congenital or retention polyps, these type of polyps develop in the rectum of children below 5 years of age. It is usually a result of localized abnormal development of the normal tissue. Juvenile polyps are usually found incidentally but sometimes can be found in relation to rectal bleeding or intestinal obstruction. Asymptomatic juvenile polyps do not require any therapy.  Juvenile polyps can also be seen as a part of some hereditary syndromes like Peutz Jegher’s syndrome or juvenile polyposis syndrome. The latter has an increased risk of colon cancer. 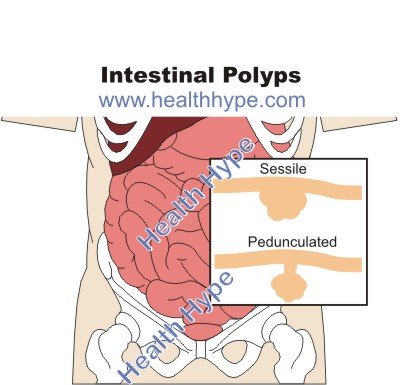 The APC gene is a tumor suppressor gene which regulates the intestinal epithelial cell growth. When the function of this gene is lost due to a genetic abnormality, the normal growth control of the mucosal epithelium is lost and leads to development of polyps. About 30% of patients develop the APC gene mutation sporadically, without any family history.

Polyps are found throughout the large bowel in this syndrome and untreated familial adenomatous polyposis patients have a very high risk of colorectal cancer. The syndrome accounts for 1% of patients developing colorectal cancer. Almost 90% of the patients with familial adenomatous polyposis may also have polyps in stomach or duodenum. About 10% of the patients with polyps in duodenum are at risk of developing adenocarcinoma of the duodenum. The duodenal polyps close to the ampulla (ampullary polyps) are known to have high malignant potential.

Turcot’s syndrome is a variant of familial adenomatous polyposis with a strong association to brain tumors and colonic polyps. The polyps are larger but fewer in number. Majority of the patients with Turcot’s syndrome have APC gene mutations while a few have mutations in DNA mismatch repair genes like hMLH1.

Hereditary nonpolyposis colorectal cancer, sometimes referred to as Lynch’s syndrome, is an inherited autosomal dominant genetic abnormality that is caused by mutations in DNA mismatch repair gene. The genes commonly mutated in these patients include hMLH1 and hMSH2. These gene mutations can also lead to DNA microsatellite instability (MSI).

HNPCC is the most common type of hereditary syndrome causing colorectal cancer. About 3 to 5% of all cases of colorectal cancers are associated with HNPCC. It is usually diagnosed in the 5th decade of life. The polyps in HNPCC are predominantly found on right colon and are limited to less than 100 in number. It has an 80% risk of becoming malignant (cancerous). There is also an increased risk of cancer in the small bowel. HNPCC is often associated with other tumors like ovary, pancreas, endometrial etc.

Peutz-Jeghers syndrome is a rare inherited autosomal dominant disorder. The disorder results from mutation in the serine-threonine kinase STK11 gene present on the chromosome 19. Patients suffering from the syndrome have intestinal polyps in association with some characteristic pigmentation of skin and mucosa. The syndrome is usually diagnosed in the third decade of life.

These intestinal polyps are predominantly found in the small intestine, but are not confined to it. Lesions can also be found in colon or stomach in many patients. The polyps of Peutz-Jeghers syndrome tend to have a core made of smooth muscles arising from the muscularis mucosa and hence cannot be called a true polyps.

The polyps are usually non-malignant but occasionally become malignant. The symptoms of the syndrome include bleeding and bowel obstruction. Polyps in the gallbladder, urinary bladder and nasal passages, ovarian tumors, and melanin spots on lips or oral mucosa are extraintestinal manifestations of Peutz-Jeghers syndrome.

Juvenile polyposis is a rare inherited autosomal dominant syndrome. It is characterized by ten or more hamartomatous polyps throughout the small and large intestine. Juvenile polyposis has a 10% risk of colorectal cancer. It is caused by mutations in genes like the SMAD4 and PTEN. Patients usually present with rectal bleeding, anemia or abdominal pain in childhood or adolescence. Some congenital abnormalities like pulmonary arteriovenous malformations are seen with juvenile polyposis patients.

Cowden’s syndrome is a rare autosomal dominant disorder caused by genetic abnormalities in the tumor suppressor gene PTEN. The disorder is characterized by multiple gastrointestinal hamartomatous polyps which are free of malignant potential. These patients also have hamartomatous polyps of the skin and mucous membranes, papillomas in the oral cavity and keratoses of the hands and feet. Cowden’s syndrome is also associated with malignant tumors of thyroid and breast.

Most intestinal polyps are asymptomatic, meaning that it does not cause any symptoms. It may only be discovered upon examination for other gastrointestinal symptoms during endoscopic investigation – upper GI or colonoscopy. An intestinal polyp is more likely to cause symptoms as it increases in size. However, in some cases, even small polyps may be symptomatic. Some of the signs and symptoms include :

Less commonly, large polyps may lead to intestinal obstruction. Read more on blocked bowels (small and large intestine). Large polyps with long pedicles may prolapse through the anus. Villous adenomas tend to secrete copious quantities of mucus and when coupled with diarrhea, hypokalemia (abnormally low levels of potassium in the blood) may arise.

Detecting Polyps in the Intestine

Colorectal polyps may be felt during digital examination of the rectum in some patients. In the event of minor blood loss (bleeding polyp), a fecal occult blood test may confirm a the presence of blood in the stool. This is, however, non-specific for intestinal polyps and other causes of blood in the stool need to be considered.

Adenomatous polyps smaller than 0.5 cm are not usually treated. In individuals with limited number of polyps, the polyps are removed (polypectomy) during the endoscopy/colonoscopy.

Removal of Single or Multiple Polyps

The stalk of the pedunculated polyp is often cut with the help of a wire-loop or snare and the base is cauterized to prevent bleeding. Flat or sessile polyps may be removed by piece-meal snare polypectomy or by using a technique called as endoscopic submucosal resection (EMR). An EMR involves injecting fluid under the polyp, which helps to lift the lesion and thereby make for easier excision. The polyp may be removed surgically if endoscopic resection of the lesion is not possible. When numerous polyps are present polypectomy may not be practical and resection of the affected part of intestine is the preferred approach in such patients.

Patients who have undergone adenomatous polypectomy are at increased risk for recurrence of adenomas and also at risk for colorectal adenocarcinoma. Such patients are usually followed up with colonoscopy in 3 years. Colonoscopy may be performed earlier in patients who had multiple large polyps while the same may be delayed as much as by 5 years in case of patients with less than 3 tubular adenomas of less than 1 cm size.

In patients with familial polyposis syndromes total proctocolectomy (removal of rectum and colon) combined with ileostomy or anastomosis of ileum and anus is the primary treatment option. Patients with APC gene mutations having high-risk ampullary duodenal polyps may be treated with pylorus-sparing pancreaticoduodenectomy (removal of pancreas and duodenum) or pancreas-sparing duodenectomy (removal of the duodenum while retaining the pancreas). First-degree relatives of affected individuals should be screened with APC gene testing, followed by annual flexible proctosigmoidoscopy from the age of 12.

Patients with Peutz-Jeghers syndrome are closely monitored for any complications of the syndrome with regular physical and endoscopic examination. Large polyps or bleeding polyps are removed endoscopically. Juvenile polyposis syndrome patients with severe dysplastic polyps are treated with subtotal colectomy.

For HNPCC and related conditions, a wait and watch approach is usually taken with regular colonoscopic screening every 2 years from the age of 21 to the age of 40 and then yearly thereafter. Women with strong family history for HNPCC should also undergo screening for tumors of pelvic organs including endometrial biopsy.