Most of us do not consider any link between eating and diarrhea unless we have a common diarrheal illness like the stomach flu (viral gastroenteritis). Howevever, for some people diarrhea after eating can be an almost daily occurrence. There are several possible reasons for this eating and diarrhea link. Some of these causes may be acute while others can be chronic.

It is important to understand some of the basics of how food travels from the mouth to the anus. Contrary to what may people may think, the food that has just been eaten is not the stool that is passed out if there is diarrhea immediately after eating. Even when the gut is irritated and the movement of food and waste through the bowels is faster than normal, it can still take several hours for food that is eaten to reach the rectum.

Time for Food to Exit the Bowels

The time it takes for food to travel from the mouth, be digested and passed out as a waste (feces) is known as the bowel transit time. This can vary from person to person but it is within 12 to 48 hours. It can be, however, take as long as 72 hours. Some people experience a bowel movement just after eating but this is not the same food that has been consumed.

Diarrhea After a Meal

Having a bowel movement does not constitute diarrhea if the stool is firm, well formed but soft, and there are less than three bowel movements within a 24 hour period. Sometimes there may be the need to pass stool shortly after having a meal and it can occur repeatedly with almost every significant meal for a number of different reasons. The causes of bowel movement after eating can overlap with the cause of diarrhea after eating.

When a person is suffering from diarrhea due to any number of causes, the bowel and nerves controlling bowel activity are usually irritated. The bowels are essentially hyperactive. Although the nerves for each part of the gut have specific functions for that area, there are some nerve reflexes in one part of the gut that can also affect another part of the gut. In the case of bowel movements, this is known as defecation reflexes.

Most defecation reflexes are isolated to the lower bowel. However, some reflexes can be triggered as high as the stomach and then stimulate the defecation process.The two important ones in this case are the :

Both these reflexes then stimulate the lower bowels (colon). The urge to have a bowel movement is triggered almost immediately after eating or within a 20 to 45 minute period on average. 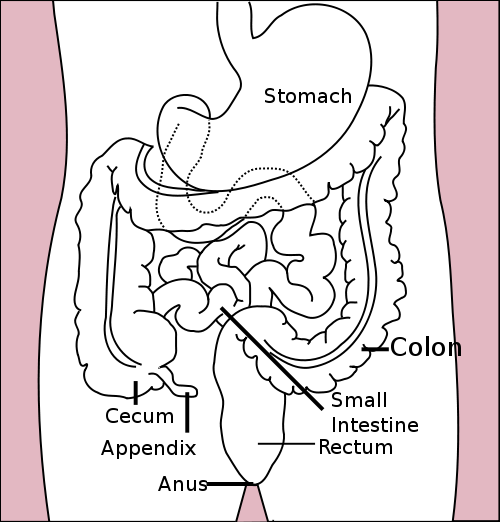 Picture of the stomach and bowels.

The causes of diarrhea after eating can be considered in terms of when it arose and how long it has been persisting. Therefore it may either be acute where it started suddenly and only occurred a few times without a previous history of diarrhea after eating of most meals. Alternatively it may be chronic where diarrhea may arise with almost every meal and has been ongoing for weeks, months or even years.

A single attack (or few attacks) of diarrhea occurring few minutes to few hours after eating may be due to :

Diarrhea after a meal, occurring on a long term basis with repeated attacks, may be due to :