A nasal polyp is a small outgrowth of the mucous membrane tissue that lines the nasal passages and sinus cavities. When this tissue is constantly inflamed and swollen, a polyp may develop although the exact cause of the polyp formation is not known. While the term ‘growth in the nose or sinus’ seems serious, nasal polyps are not cancerous tumors but may sometimes occur in cases of neoplasms of the nose or paranasal sinuses.

Certain conditions like hay fever, infections or sinusitis cause a swelling of the nasal and sinus lining. This mucous membrane lines the entire nose and sinus and usually produces mucus to keep the lining moist and trap any foreign matter entering through the nose. When irritated, the mucus membrane lining will often swell and produce excess mucus  (‘runny, leaky or stuffed nose’). In these situations, a polyp may form from this inflamed nasal lining and starts off as a tiny ‘bump’ which can slowly grow into a small ‘lump’.

A nasal polyp may occur anywhere in the cavity of the nose or paranasal sinuses but is most often seen near the opening of the maxillary sinus. It is less commonly noted near the ethmoidal sinus. A nasal polyp is an outgrowth of the mucous membrane tissue lining the cavity and not a growth of deeper tissue. 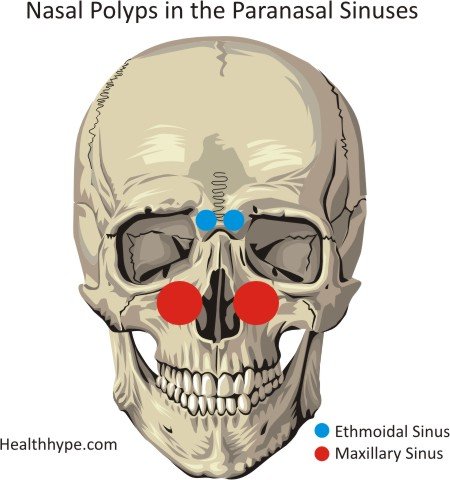 The exact reason for a polyp to develop is unknown but it is more likely to occur in these conditions :

Nasal polyps may occur with no noticeable symptoms or it may cause symptoms similar to other nasal conditions.

Treatment should be directed at the cause of nasal or sinus inflammation to reduce swelling of the mucous membranes. In terms of allergies, this may commence with antihistamines and corticosteroids while infections may require antiviral drugs, antibiotics or antifungal agents. In cases of nasal polyps where no clear cause can be identified for the swelling of the nasal lining, your doctor may start you on a course of corticosteroids. This should reduce the nasal swelling and may possibly allow for the polyp to reduce in size or regress. Nasal polyp surgery is usually required followed by a corticosteroids to prevent the polyp from recurring.