What is black lung disease?

In the early stages, the damage to the lung may be minimal with little or no symptoms. This innocuous stage is known as asymptomatic anthracosis. Anthracosis is also seen with cigarette smoking and urban pollution due to the inhalation of carbon dust. Carbon dust in coal is the main causative particle of coal worker’s pneumoconiosis. Its effect may be compounded by the presence of silica dust which promotes rapid progression of the disease.

Anthracosis is the initial milder form of lung disease caused by the inhalation and accumulation of coal dust particles in the airways and lungs. Although it is often termed asymptomatic anthracosis, patients may display mild non-specific symptoms and have a greater predisposition to repeated respiratory tract infections like bronchitis. This type of lung disease may also be seen in residents of heavily polluted cities and tobacco smokers. Carbon particles are consumed by the macrophages present in the airway and lung tissue and accumulates in the local lymphoid tissue.

Simple coal worker’s pneumoconiosis (SWCP) is where the coal dust, along with macrophages, forms smaller coal macules and larger nodules that is distributed throughout the lung tissue. The upper lobes of the lung and upper parts of the lower lobes are mainly affected. Lung functioning may be normal and patients may remain undiagnosed due to the absence of symptoms until routine screening and investigations for other lung diseases, indicates the presence of macules and nodules.

Complicated coal worker’s pneumoconiosis is a progression from simple CWP where there is massive fibrosis of the lung tissue. It develops over years and is characterized by multiple areas of extensive scarring with central necrosis than can span 2 to 10 centimeters in diameter. Lung functioning at this point is usually compromised and the symptoms associated with pneumoconiosis is clearly evident. Caplan’s syndrome is when the massive pulmonary fibrosis (complicated CWP) occurs along with rheumatoid arthritis. 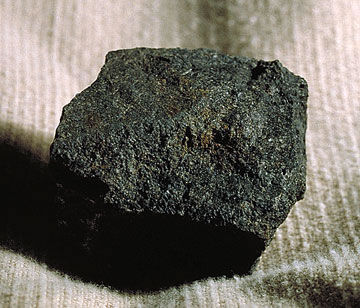 Picture of coal from Wikimedia Commons

Coal dust is inhaled and passes through the airways, including the terminal bronchioles, where it enters the air sacs. Macrophages (scavenger cells) in the alveoli and interstitium consume as much of the coal dust as possible in an attempt to pass it out of the respiratory system with expectorated mucus (sputum). At some point, the macrophages are overwhelmed and the clearing mechanisms are insufficient to deal with the quantity of inhaled coal dust.

The dust-laden macrophages accumulate and by the release of its chemical mediators, it promotes the process of fibrosis. This is further accelerated by the presence of more fibrogenic particles like silica in the coal dust. Initially this process is seen as the formation of small black macules and large coal nodules (simple CWP). Eventually the nodules grow and coalesce into masses that is seen as extensive scarring of the lung tissue (complicated CWP). The lung function is compromised as gas exchange at these areas is significantly impaired and lung elasticity is drastically reduced.

As with other types of pneumoconiosis, the symptoms of difficulty breathing, cough and sputum. However, mild coal worker’s pneumoconiosis, even complicated CWP, does not impair pulmonary function to the extent of silicosis and asbestosis. It is only in the advanced stages marked by massive pulmonary fibrosis (extensive scarring of the lung tissue) that lung function is compromised. Cigarette smoking may lead to anthracosis but does not cause simple or complicated pneumoconiosis without coal dust exposure.

Simple CWP characterized by the presence of coal macules and nodules may be asymptomatic like anthracosis. Unlike other types of  pneumoconiosis, CWP will not progress if exposure to coal ceases. Patients may report some sputum production with simple CWP but this can be transient. An increased susceptibility to acute respiratory infections may be seen with patients reporting recurrent bouts of acute bronchitis. Once COPD sets in or extensive fibrosis as is seen with complicated CWP, then a chronic cough and difficulty breathing (dyspnea) may become prominent.

Sputum may be dark to black (melanoptysis). Black sputum (melanoptysis) is seen with inhalation of black carbon particles as is the case with CWP but other causes of a black sputum also needs to be considered. Read more on sputum color. It may be further complicated with the presence of blood in the sputum (hemoptysis).

The presence of rheumatoid arthritis along with coal worker’s pneumoconiosis is known as Caplan’s syndrome. It may also be seen in asbestosis and silicosis.

Coal dust can also cause chronic obstructive pulmonary disease (COPD) so the signs and symptoms of chronic bronchitis and emphysema. This may occur independent of cigarette smoking. Read more on :