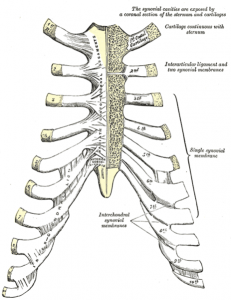 The flexible cartilage and joints allows for the expansion of the chest cavity during breathing. It also helps the chest absorb force applied directly to it or transmitted via the upper limbs through the clavicle (collarbone). A number of ligaments and muscles stabilize these joints. Costochondritis is a common cause of chest pain (refer to Bone Chest Pain), especially in children, teens and young adults. Joint swelling is not common in costochondritis and if swelling is present, it may be Tietze’s syndrome.

While the pain in costochondritis is a result of the costal cartilage inflammation, it may also be associated with strain of the surrounding ligaments and muscles. This is common in cases where costochondritis is a result of physical strain, as with persistent coughing, weight lifting and other forms of physical activity that may strain the cartilage, muscles and ligaments.

Costochondritis pain is usually not present when breathing at a normal rate and depth but any deep breathing, coughing or sneezing and certain movements of the trunk and upper limbs will elicit pain. Costochondritis is often described as breast bone pain, where the pain is felt towards the side of the sternum. Inflammation of this cartilage may also result in a popping sternum noise or sensation upon stretching and movement.

Costochonditis is more likely to arise with minor injury to the chest wall and repeated strain associated with coughing, and excessive force that travels through the clavicle to the ribcage.

Other causes are more likely to be associated with infections caused by viruses, bacteria or even fungi. Although repeated coughing associated with respiratory tract infections may lead to costochondritis, the inflammation of the costal cartilages may be due to an infection itself. This is often seen with bacteria that reach the cartilage and joints through the bloodstream, direct entry through wounds on the chest wall or after surgery.

Less commonly the inflammation of the costal cartilages and neighbouring joints arises with arthritis or fibromyalgia. A significant number of cases of costochondritis occurs for no known reason. Many of these idiopathic cases may be related to previous trauma although the incidents that led to costochondritis is forgotten or not associated with the current condition.

The treatment options include the use of anti-inflammatory drugs to reduce pain and inflammation. In chronic cases the relief is usually not permanent and a corticosteroid injection may be necessary at intermittent periods to relieve severe pain. Hot and cold therapy over the chest wall may be helpful in providing symptomatic relief. Limiting movement of the joint, by not breathing too deeply or treating an underlying persistent cough may be effective. Some people find moderate relief with strapping but this should be done by a physical therapist.