What is Prostate Cancer?

Prostate cancer is a malignant tumor of the prostate gland, the small walnut-sized gland that lies below the bladder in men. It is one of the most cancers in men in the United States and almost 10% of the adult male population will develop prostate cancer within their lifetime.

The increase in prostate cancer diagnosis over recent years can be attributed to prostate specific antigen (PSA) testing which allows for widespread screening. This coupled with repeated prostate biopsy in the event of elevated PSA levels has allowed for early diagnosis and rapid commencement of treatment thereby reducing the mortality rates. Nevertheless, prostate cancer claims the lives of over 30,000 men in the United States every year.

Most adenocarcinomas originate in the peripheral zone of the prostate gland which lies just below the capsule and accounts for the largest part of the adult prostate. Less frequently, cancer may originate in the central or transitional zone of the prostate gland but these may be associated with rare types of prostate cancer like small cell carcinoma, transitional cell carcinoma or a sarcoma.

Pathologically adenocarcinomas account for more than 95% of prostate cancers. Almost 70% of the prostate cancer arise from the peripheral zone of the prostate gland and the remaining prostate cancers arise from the transition zone. Often those arising from the peripheral zone are more aggressive while those from the transition zone are less aggressive. The pathologic evaluation of biopsied prostate tissue is traditionally done using Gleason Scoring. The microscopic evaluation of prostate tissue with careful histologic grading is very important factor in assessing the outcomes in prostatic cancer.

Histological examination often reveals the presence of other cells with alterations that closely resemble a carcinoma. This is known as high-grade prostatic intraepithelial neoplasia (PIN).  PIN is more often seen in the cancerous prostate gland and in close proximity to the carcinoma. It is believed that PIN may be the intermediate stage between a normal cell and cancer cell but as yet it has not been conclusively identified how PIN is related to or progresses to a carcinoma, if it indeed it does so. 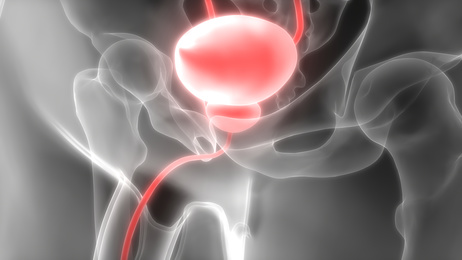 Prostate cancer, like other malignancies, arise when genetic alterations in the prostate gland cells cause uncontrolled division of abnormal cells. These tumors (primary) invade the surrounding healthy tissue, destroying it and spreading further. Eventually the cancerous cells may infiltrate surrounding organs or enter the blood stream or lymphatic system to lodge in distant sites (metastases). Therefore the cause of prostate cancer is associated with genetic alterations or defects in one or more cells in the prostate. Sometimes metastatic spread can allow cancer cells from other sites to lodge in the prostate (secondary).

Certain factors are known to increase the risk of prostate cancer development in men, although there may still be unknown factors at play.

Prostate cancer is often asymptomatic in the early stages. These days, early diagnosis is more often due to routine prostate cancer screening and the finding of elevated prostate specific antigen (PSA) levels. Prostate cancer may also be suspected due to abnormal findings upon conducting a digital rectal examination (DRE) – suspicious nodule on the prostate that is stony hard and the median sulcus of the prostate gland may be absent. Therefore men over 50 years of age, especially those at high risk of prostate cancer should undergo screening on a regular basis.

Since most tumors develop in the part of the prostate gland that is away from the urethra, urinary symptoms only develop later in the course of the disease. These symptoms may often be mistaken for other prostate conditions like prostatitis or benign prostatic hyperplasia (BPH) or even bladder conditions like cystitis. This may include :

As the condition progresses, other symptoms may become apparent including :

Urinary symptoms may indicate spread to the bladder or urethra while lower back pain could be due to metastatic spread to the lumbar spine. However, this has to be assessed with a imaging techniques and biopsy.

Spread to he pelvic lymph nodes can occur fairly early and this can sometimes present with swelling of the lower limbs. Obstruction of the ureters, renal failure, weight loss and anemia are more likely to be seen with metastatic spread. This will accompany localized symptoms at distant sites.

Distant metastases more commonly occurs to the bone and rarely to other sites like the peritoneal cavity, lungs, liver or brain. Bone metastasis can be asymptomatic in many patients but can also present with fractures, severe bone pain or tenderness. When the vertebrae are affected, there may be signs of spinal cord compression.

Evaluation of the architectural details of individual cancer glands is carried out in Gleason Scoring. Five distinct patterns of growth are described in the Gleason scoring. This includes pattern 1 which denotes tissue which is well differentiated with glandular appearance to pattern 5 which stands for the poorly differentiated variety with a loss of glandular structure. The final Gleason score is calculated by the sum of the grades of the most common and second most common growth patterns. The Gleason score values can range from 2 to 10. The tumors are classified based on the Gleason scores :

Stage I and stage II indicates a clinically localized cancer, devoid of any lymph node (N0) or distant spread (M0). The tumor is confined to prostate without extending to the prostate capsule. Stage III corresponds to a T3 tumor without any lymph node spread (No) or distant spread (M0). A stage IV tumor includes T4 tumors and tumors of any T stage with node spread (N1) or metastatic spread falls under stage IV (M1).