A major concern for many parents as the mother approaches full term  is the complications that may arise after delivery,  particularly breathing problems that may affect the newborn. At birth, the focus of the attending physician is to assure healthy and spontaneous breathing of the newborn as any impediment may result in damage to the brain tissue or even death.

However in certain cases, problems with adequate ventilation may arise, especially in high risk pregnancies.

What is Asphyxia Neonatorum?

Asphyxia is the lack of oxygen (hypoxia) or increase in carbon dioxide (hypercapnia) within the body due to problems with breathing.

Asphyxia neonatorum (sometimes referred to as birth asphyxia) is the hypoxia and/or hypercapnia that occurs in newborns. This may be categorized into perinatal asphyxia or neonatal asphyxia.

Neonatal asphyxia (newborn asphyxiation) is the asphyxia that results after the baby is delivered. Asphyxia neonatorum may occur as a result of :

Typically, the Apgar score system is used to evaluate the condition of the newborn, taking note of color, heart rate, respiration, reflex responses and muscle tone of the baby. These five physical signs are graded as 0, 1 or 2 and a total score of less than 5 is an indication of possible neurological damage and the need for an emergency response to ensure that the newborn survives. 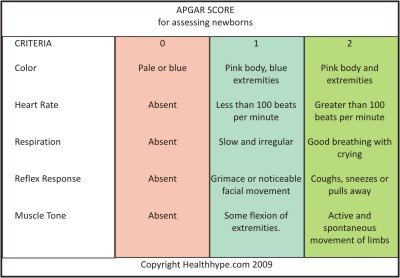 The Apgar score is recorded immediately after birth and another recording is taken approximately 5 minutes after birth.

* Color indicates either adequate or inadequate oxygenation of the blood. Pale or blue extremities at birth should not be an immediate concern if the body is pink and other factors do not indicate any depression.

* Infant heart rates are significantly higher than adult heart rates and a rate of 100 beats per minute or greater is considered normal.

* A crying baby is usually an indication of good breathing.

This is assessed by the reflex response to stimulation, often from the insertion of a nasal catheter, usually upon suctioning although stimulation of the sole of the foot may also be considered.

* Flexion refers to the bending of the limb at the knee or elbow or raising of the arms or leg at the shoulder or hip joint respectively.

A score of less than 5 indicates severe depression and the need for emergency medical attention. The maximum score of 10 is not often present even in healthy newborns and parents should not be concerned if their baby scores a healthy 8 or 9 on the Apgar score. Premature babies often have a lower apgar score and usually require ventilation at delivery.

In cases where the newborn’s Apgar score is recorded at less than 5, resuscitation is usually required.

The immediate priority of the attending physician is to secure integrity of the airway by clearing any secretions, fluid or blood. This is often done by suctioning with a soft catheter. In newborns who are well oxygenated but slightly limp due to the use of analgesics or anesthetics, the attending physician may gently slap the feet of the baby before commencing with suctioning.

After clearing the airway, ventilation with oxygen is usually necessary in asphyxia neonatorum. The attending physician may commence resuscitation with a neonatal bag mask with positive pressure ventilation. Efforts to stimulate the circulation may follow if positive pressure ventilation does not assist with suitable oxygenation noted by a pink color of the extremities. The newborn’s body temperature must be maintained during ventilation and efforts to stimulate circulation and this is usually done through heaters rather than just blankets.

Once the newborn baby is stabilized, he or she will usually be placed into an incubator to ensure positive pressure ventilation as well as suitable temperature regulation. This is often conducted in a neonatal ICU (intensive care unit)  where close observation by trained staff will ensure that there are no other episodes of hypoxia.