The pineal gland does not receive much attention in medicine because there are no significant diseases or lesions that solely affect it apart from tumors. Even then, a pineal tumor referred to as a pineoloma is a rare occurrence in comparison to diseases affecting surrounding tissues and glands. For as long as the pineal gland was known to have existed, there has been much debate about its function with some ascribing it to being the “seat of the soul” which earned the pineal gland the term of “third eye”. However, the pineal gland is now well understood and its functions in humans and other animals have been ascertained.

What is the pineal gland?

The pineal gland is a minute gland located at the base of the brain. It lies between two areas known as the superior colliculi (singular ~ colliculus) which is an essential visual center in the brain. Like any other endocrine gland in the body, the pineal gland secretes a hormone in response to certain stimuli. In the pineal gland, this is the hormone melatonin and the stimuli appears to be darkness.

Anatomy of the Pineal Gland

The pineal gland is a composed of specialized epithelial-like cells known as pineocytes (pinocytes). These cells have long processes with makes contact with certain types or nerve cells known as astrocytes. The pineocytes have photosensory capabilities meaning that it is sensitive to light. At the same time it has neuroendocrine properties meaning that that it responds to nervous stimulation for its endocrine function of secreting melatonin. It is also important to note that there are embryonic germ cells in the pineal tissue which are important cells to consider in tumors. 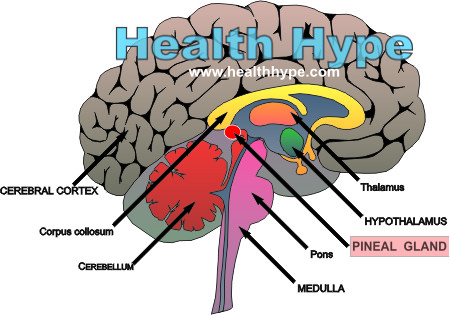 The pineal gland is only about 5 mm to 8 mm and shaped like a pine cone hence the name pineal gland. It weighs a mere 100 to 180 milligrams (mg).

Functions of the Pineal Gland

Another effect of the melatonin is that it may act on the anterior part of the pituitary gland (anterior pituitary) to suppress gonadotropic hormones. This effect has been noticed in some animals where winter with the longer hours of darkness may not only play a role in hibernation but also causes the gonads (sex organs) to shrink slightly. This may inhibit the sex drive and account for seasonal fertility.

In humans it may be a bit more complex as the conscious mind has a greater effect in determining patterns of sexual behavior. However tumors of the pineal gland (pinealomas) may cause overactivity or underactivity of the gland with hyp0gonadal or hypergonadal function (overactive or underactive gonad functioning).

These types of tumors are uncommon and may stem from the pineocytes, astrocytes or germ cells. The latter, a tumor of the germ cells, are the most common and referred to as germinomas. It is sometimes debated as to whether these pineal tumors should be classified as a pinealoma or whether the term should be reserved solely for pineocyte tumors. Germinomas closely resemble certain tumors of the testes (males) or ovaries (females) due to the similarity of cells from which it arises. Astrocytoma is an uncommon type of tumor as well but is not isolated to only the pineal gland as astroycytes exist elsewhere in the central nervous system.

“True” pinealomas involve the pineocytes. It can be categorized into pineoblastomas or pineocytomas. Depending on the degree that the pineal gland may be compromised, patients may report insomnia. Other symptoms may arise with the tumor compressing on surrounding areas of the brain and intracranial structures resulting in headaches, nausea, vomiting and obstructive hydrocephalus (build up of CSF due to blockage of normal drainage).