What is sleeping sickness?

Sleeping sickness, also called African trypanosomiasis, is a  caused by a small parasite Trypanosoma brucei. It is confined to sub-Saharan Africa. Although the term sleeping sickness may be associated with other infections which causes similar symptoms, the term is more commonly associated with African trypanosomiasis.The infection is transmitted by the bite of an infected tsetse fly. The condition is fatal if prompt medical treatment is not implemented as it progresses to the second phase where the brain and nerves are affected. 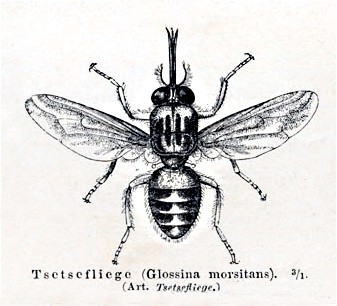 Picture of the tsetse fly from Wikimedia Commons

Who gets sleeping sickness?

Travelers get African trypanosomiasis by visiting endemic areas in Africa. It affects about one US traveler every year. In majority of the cases, the infections acquired in East African game parks and are caused by T. brucei rhodesiense. Sleeping sickness is very common in some countries of East and West Africa and threatens millions of natives and travelers. It can affect people of all ages, races and genders.

What does sleeping sickness do?

Humans acquire T. brucei infection through tsetse fly bite. The bite may cause a painless skin sore at the site, which may disappear on its own in some weeks. The introduced trypomastigotes mature and grow in the blood and lymph glands. The infection causes discomfort, fever, skin rash, and muscle wasting. If the parasites reach the brain, they may cause mental and behavioral changes (like encephalitis, coma). Death may occur. 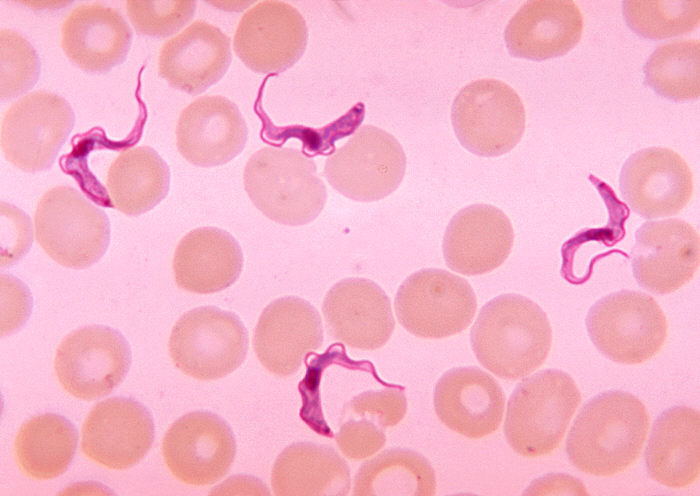 Picture of trypanosome parasite in the blood from Wikimedia Commons

The human immune system tries to fight off this infection but the parasites can escape these defense mechanisms by changing their forms. After evading the immune responses, the parasites grow rapidly in blood and lymph nodes and reach organs like the brain and the heart. On the other hand, the immune system’s continued response at these sites, results in the breakdown of red blood cells, thereby leading to anemia, and inflammation of heart and brain and its meninges.

Due to body’s hypersensitive reaction to the parasites, many skin problems occur. Itching, swelling, and hives are commonly seen. The gastrointestinal system (GI) and liver are also affected.

The symptoms of sleeping sickness vary in different phases and can be grouped as early and late.

This is known as the hemolymphatic stage.

This is known as the neurological stage.

Picture of the life cycle of the sleeping sickness parasite sourced from CDC.gov

At this point the life cycle of the parasites starts. The trypanosomes multiply for 2 to 3 weeks in the mid-gut of tsetse fly. After that, they migrate to the salivary gland, where they grow into the infective form, called epimastigotes. These trypomastigotes infect humans who are then bitten by the tsetse fly.

The main risk factors is travelling to parts of Eastern, Western and Central Africa.

The presence of any of the signs and symptoms, particularly in a patient with a recent history of traveling to endemic areas, should warrant the need for further investigation. The following tests can be performed to diagnose sleeping sickness:

The treatment aims at: