What is a Freckle?

Freckles are hyperpigmented spots on the skin, especially on the face, that is more common among lightly pigmented individuals. A freckle, also known as an ephelis, is usually small with a diameter of 1 millimeter or more but not exceeding 5 millimeters (macules). These spots are flat, with several occurring together in a circumscribed area and may vary slightly in color from tan with a slightly reddish hue to light brown. Changes in color may be noticed after sun exposure and freckles may even fade and darken during winter and summer months respectively.

Melanocytes are a type of cell found in the epidermis of the skin. It produces the pigment melanin which helps protect the skin from the damaging effects of ultraviolet light. Melanin concentration varies in the skin but tends to increase in areas exposed to sunlight. Freckles are caused by an increase in melanin production by the melanocytes in the epidermis of the skin. Although the amount of pigment is increased at the specific spot, the number of melanocytes stays the same but the cells may be enlarged. 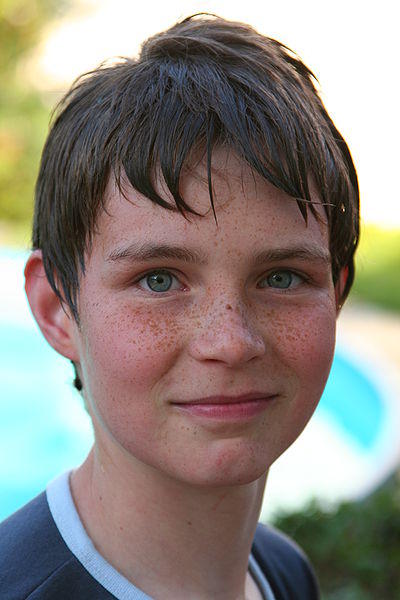 Freckles tend to occur in people with very pale complexions, especially those with reddish hair. It is also more likely to occur in families thereby indicating a genetic predisposition. While sun exposure may be a trigger or exacerbating factor, it does not cause freckles. Sunburn spots are not freckles in the true sense although it may sometimes be labeled as sunburn freckles.

Lentigo is another type of flat dark spot seen on the skin and often confused with freckles. These spots occur due to an abnormal increase in the number of melanocytes at the given area, unlike freckles which are due to an increase in the pigment melanin with no change in the number of melanocytes. Lentigines (plural of lentigo) are often larger than freckles (patch not macule) extending up to 10 millimeters in diameter and do not get darker with sunlight exposure. However, there is usually a history of long term and excessive exposure to the sun over years or even decades. It is often referred to as liver spots and is commonly seen in the elderly, especially at the back of the hands. There are different types of lentigines which may be caused by PUVA therapy (for conditions like psoriasis) and overuse of tanning beds.

Another type of skin spot that is sometimes mistaken for a freckle is a melanocytic nevus. These types of skin spots are known as moles and are usually raised lesions but may start off as flat spots (macules). It usually does not become as large as lentigines and seems to darken with hormonal changes, as is seen with pregnancy. Moles are diverse in size, shape and appearance and is often mistaken for a number of skin conditions but should always be investigated for the possibility of a melanoma.