Balantidiasis refers to the protozoal infection of the large intestine, caused by Balantidium coli. Pigs may be the primary reservoir of this ciliated protozoan, which can also infect humans and infest the colon. B. coli transmits through the fecal-oral route and humans can acquire balantidiasis by ingesting contaminated food and water, which has come into contact with feces of infected humans or animals.

Many patients harboring B. coli infection do not present any symptoms, however, patients with other serious illnesses are more affected by balantidiasis. Such people may experience symptoms like persistent abdominal pain, diarrhea, and occasionally a perforated colon. Balantidiasis is rare in the United States, but is more common in the endemic tropical countries with warmer climates. B. coli is also more prevalent in developing countries with poor sanitation and hygiene practices.

Infection with the parasite can result in one of three manifestations :

B. coli protozoa exist in two forms: trophozoites or cysts. Trophozoites are oblong or spherical in shape, and are the largest known protozoan parasites of human. On the other hand, cysts or the infective forms of B. coli, cysts are smaller and more spherical in shape. Unlike trophozoites, cysts do not have cilia on their surface and are not motile. 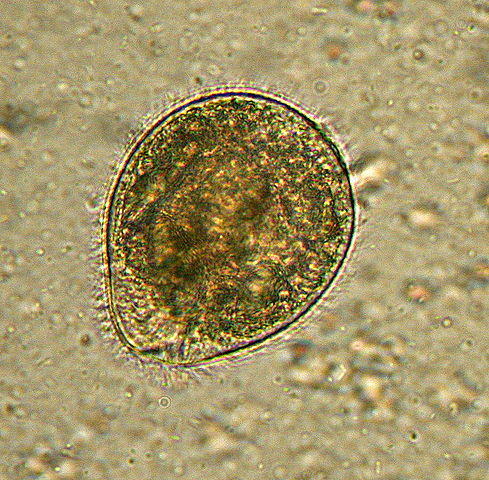 Balantidiasis is transmitted to new hosts through cysts of B. coli by ingestion of contaminated food or water. Once the cysts reach the small intestine, the trophozoites escape from the cysts and colonize the large intestine. The trophozoites multiply in the lumen of the large intestine of humans and animals, and again form infective cysts. Mature, infective cysts are passed with feces and transmitted to new hosts.

Though B. coli resides in the lumen of the large intestine, they can affect the cecum and the rectum as well. These large protozoans can also penetrate the thick lining of the intestine called mucosa and cause ulcers. B. coli invade the mucosa with the help of the enzyme hyaluronidase that degrades components of mucosal cell wall.

Other bacteria present in the intestine may also enter the ulcer along with B. coli, resulting in secondary infections.

Majority of the people with B. coli infection do not present any symptoms. These people, however, may still act as B. coli carriers, in whom the protozoa reside and produce tiny infective cysts. These cysts passed in the feces result in more infections or re-infection. More severe signs and symptoms are seen in people with low immunity. Upon acquiring the infection, the following symptoms may include :

Many of these symptoms are non-specific and may be mistaken for other diseases.

Balantidiasis spreads through ingestion of infective cysts of B. coli, present in contaminated water or food. Several factors that increase the risk for developing balantidiasis may include the following:

Balantidiasis can be diagnosed with the help of following tests:

Treatment of balantidiasis aims to decrease the severity of the symptoms and to prevent complications. Patients with a weak immune system often require prolonged courses of therapy.

Antibiotics are given to kill the B. coli protozoa. Tetracycline or other alternatives like metronidazole, puromycin, iodoquinol, and nitazoxanide may be given to the patients with balantidiasis.

Tetracycline kills the protozoa by inhibiting protein synthesis in their cells, whereas the synthetic drug metronidazole has efficient anti-protozoal and antibacterial action. Both drugs are frequently given to the patients experiencing diarrhea.

Fluid and electrolyte replenishment is recommended for patients with severe diarrhea.

Surgery is needed in rare cases, when balantidiasis causes appendicitis. In such patients, appendix is removed in a surgical procedure called appendectomy.

Balantidiasis can present complications in patients with underlying illnesses like diabetes, cancer, or in those with weak immune system. Left untreated, balantidiasis can cause death in 30% cases. Most of the deaths can be attributed to dysentery and bleeding, which result in shock and death.

Overall health is a key deciding factor in estimating the prognosis of balantidiasis. However, balantidiasis carries a good prognosis if treated in time with appropriate antibiotics.