Sitting is a common posture which we assume while working. It does not take much energy and gives a comfortable platform for performance of several activities. The human body has specifically developed fat pads called buttocks, which provide a cushion to the bones during this posture. The ability to sit on our buttocks without any support also depends on the vertebral column. The absence of a tail greatly helps in our ability to sit. However, we still have a rudimentary tailbone called the coccyx, which lies at the lower end of the vertebral column. The coccyx bears the weight of the body when a person leans backward while sitting. An injury of this bone causes unbearable pain during sitting and completely deprives us of this comfortable posture.

The coccyx is the terminal part of the vertebral column, which does not have any function in humans (forms tail in animals). It is attached to the sacrum above it and a few pelvic muscles below. The coccyx consists of 4 small bones which are fused together. 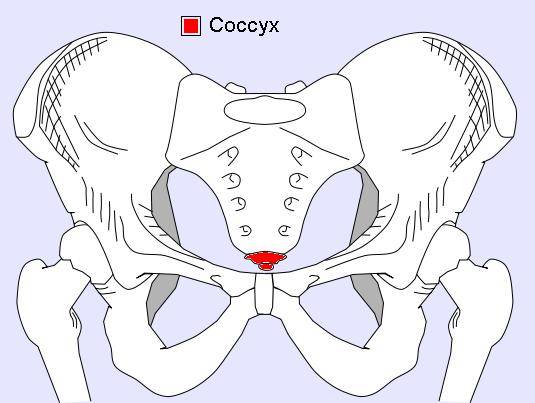 Coccyx is injured by a fall on the buttocks. The injury can vary from a simple bruise to a fracture. Simple falls, like a missed chair, result in a bruised coccyx and do not lead to fracture. A fall from a height generally causes fracture of coccyx with injuries to the sacrum and pelvis. The attachment of muscles and ligaments hold the broken pieces together and prevent their displacement.

Coccyx is also injured during childbirth. This injury  mostly occurs during the first childbirth and is associated with tearing of the surrounding ligaments and muscles.

Sitting pain and tenderness in the region of the coccyx points towards injury to the coccyx.It happens many times that a fall on the buttocks goes unnoticed and the symptoms appear later during daily activities. If these are not severe at the onset they are frequently ignored which further complicates the injury as well as the treatment. As the region is near the anus, some people may feel shy and not even talk about it. Hence, old untreated coccyx injuries are quite common.

An x-ray of the pelvis rarely shows a broken coccyx, but is still done to rule out other pelvic fractures. CT scan is generally used to confirm a coccyx fracture and is especially useful for old fractures. MRI is done to know the amount of soft tissues injured, like ligaments, muscles, and so on.