What is Down Syndrome?

Down syndrome, also known as Trisomy 21, is a genetic disorder resulting from possession of an extra copy of chromosome 21. It is named after Dr Langdon Down who first recognized and described the condition in 1866. The genetic origin of Down syndrome was identified much later by scientists in 1959. Individuals with this disorder suffer from varying degrees of learning impairment as well as having typical physical features such as a flat facial profile with upward slanting eyes, short neck, a single palmar crease, and various other recognizable characteristics.

The severity of symptoms in Down syndrome may vary from mild to severe. The condition is often associated with congenital heart disease, acute leukemia, and signs of premature aging. Down syndrome occurs in about 1 in 700 live births. The frequency of Down syndrome seems to rise with increasing maternal age. Screening for Down syndrome is now routinely offered in many developed countries. Genetic counseling is recommended for a person with a family history of Down syndrome who wishes to have a baby.

Genetic Defects in Down Syndrome

Within each nucleus of the human cell there are a set of 46 chromosomes, arranged in 23 pairs. Half of these chromosomes are derived from the mother and half from the father. During gametogenesis, which is the development and production of the male and female germ cells necessary to form a new individual, the number of chromosomes is halved. This ensures that the number of chromosomes remains constant and is not doubled at each conception. The reduction process whereby the chromosome number is halved during gametogenesis is known as meiosis. When fertilization occurs, resulting in conception, 23 chromosomes from the male partner comes together with 23 chromosomes from the female partner. The baby thus conceived has a total of 46 chromosomes.

In certain circumstances, however, errors may occur during conception which can give rise to chromosomal abnormalities. If during meiosis the chromosomes of a pair fail to separate then both members of the pair pass into the same gamete (gametes are the male and female germ cells). If this gamete is fertilized by a normal gamete, it will result in a zygote (the fertilized egg) with an additional chromosome. Different chromosomal abnormalities are associated with specific conditions or syndromes.

Risk Factors of Down Syndrome

Characteristic Features of Down Syndrome 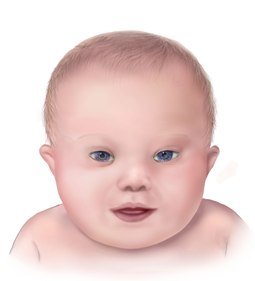 Picture of Down syndrome baby (cdc,gov)

A varying range of mental retardation is common but people with Down syndrome usually have a pleasant personality with a fondness for music. 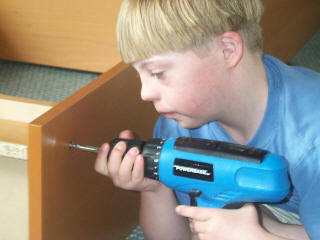 Prenatal Screening for Down Syndrome

Diagnosis of Down Syndrome

Prenatal diagnostic tests for detecting Down syndrome before birth of the baby may increase the chance of miscarriage.

The above prenatal diagnostic tests may help to detect Down syndrome before birth of the baby but may increase the chance of miscarriage. Karyotyping or chromosome analysis may confirm the diagnosis after birth of the baby.

Management of Down Syndrome

There is no cure for Down syndrome. However, associated health problems can be treated and corrective surgery done for anatomical defects. Speech therapy, occupational therapy, and physical therapy are also beneficial. Mental limitations in children may be improved with special needs programs.

The first year of life is most vulnerable, after which there is a definite improvement in the outlook. Most early deaths occur due to complications of congenital heart defects. Although life expectancy is reduced in individuals with Down syndrome, following improved medical care and better integration into society, such people can now be expected to live till 55 years or beyond. Premature aging and early-onset Alzheimer’s disease are common features.