Diarrheal illnesses due to infections are common throughout the world. Most are short-lived and do not lead to any serious complications. It may be caused by a number of different organisms, like viruses and bacteria. One of the most common of these organisms is a protozoan known as  Giardia lamblia. However, many people who are infected with the Giardia parasite never develop symptoms but may carry the parasite in their bowels for long periods of time.

What is Giardia and giardiasis?

Giardia is a microorganism known as a protozoan. The correct name for giardia is Giardia lamblia. It is a single-celled organism like bacteria but there are some internal differences between these organisms. Therefore bacteria and protozoa are considered as different types of microorganisms. Giardia lamblia is one species of protozoa. Giardiasis is the term for the disease caused by Giardia lamblia. This disease is primarily a diarrheal illness in that the Giardia protozoan mainly affects the bowels and therefore causes bowel-related symptoms.

How common is giardiasis?

Giardia lamblia is quite a common protozoan found in the gut of humans. In fact it is the most commonly identified parasite in stool samples. but it does not mean that all people who test positive will develop diarrhea. Many people are carriers – they have the parasite (Giardia lamblia) in their gut but do not have the disease symptoms (giardiasis). This can be as high as 60% in some regions of the United States.

Overall giardiasis is most frequently seen among children. As a water-borne infection, it is not only limited to developing nations where water quality and sanitation may be poor. Giardiasis affects a person of any age but children are at the greatest risk, mainly due to contact in daycare centers. The incidence of giardiasis peaks in late summer to early fall.

Causes and Spread of Giardiasis

Giardiasis is caused by Giardia lamblia protozoa. It is similar to many diarrheal illnesses that can be caused by other human intestinal parasites. The infection arises when the cysts of the Giardia parasite is ingested. It is a water-borne infection meaning that the parasite is found in water that is ingested either intentionally or accidentally.

Water sources may vary – rural streams or lakes, wells, tap water, swimming pools and whirlpool spas can all be a problem. However, the problem is greater where the water source is not properly treated and there is poor sanitation. Cysts in the feces of people who have the infection can then contaminate water and the parasite may be spread to others.

The infection can also be transmitted through food, if contaminated water is used to wash foods that are then eaten raw or inadequately cooked. Another way that the Giardia parasite may be spread is from one person to another. This occurs when a person comes into contact with another person’s feces. It is often a problem in day care center where children may come into contact with soiled diapers.

The Giardia cysts found in water and feces is responsible for the infection. These cysts are the more hardy form of the parasite. It is resistant to a range of environmental stresses – cysts can survive in cold water for several months. Once the contaminated water is consumed, the other form of the parasite known as the trophozoite emerges. It is usually in the small intestine that the trophozoite emerges from the cyst through a process known as excystation. 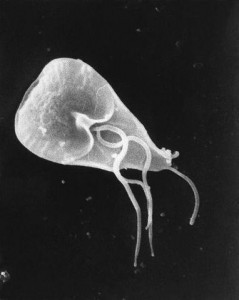 Infection depends to some degree on individual immunity. The infective dose varies from one person to another. Ingesting 25 cysts leads to a 100% infection rate. This means that any person who ingests at least 25 Giardia lamblia cysts will be infected. Once in the digestive tract, the parasite impairs absorption of nutrients in the bowels and leads to diarrhea through several ways.

The inner lining of the intestinal wall becomes more permeable when the parasite attaches to it. The villi of the intestines become flattened and the activity of digestive enzymes is affected. Therefore nutrients cannot be properly absorbed in the bowels. The parasite also affects the the normal bowel bacteria which is important for proper bowel health. This leads to a bacterial overgrowth. Collectively these effects result in diarrhea that is typical of giardiasis.

Not all people who are exposed to Giardia cysts will become ill. Many people are asymptomatic carriers. This means that they do not have any disease symptoms but can still transmit the disease to others. From those infected people who develop symptoms, some will have milder symptoms while others will have very severe symptoms. The signs and symptoms of giardiasis are not significantly different from other types of infectious diarrhea. It includes:

As with any diarrheal illness there is the risk of dehydration if the condition is not properly managed.

How long to recover?

It takes anywhere between 1 day to 2 weeks after ingesting the cysts for the symptoms to arise. This is known as the incubation period. The symptoms last from 10 days to 4 weeks. In some people it can last longer and there may be instances where the symptoms clear up but recur later. People with weakened immune systems may experience chronic diarrhea that is often difficult to treat.

People who have giardia but do not not have any symptoms usually do not require treatment. In fact most people with symptomatic Giardia infection will recover on their own even without treatment. However, in severe cases or high risk cases treatment is essential. The treatment of giardiasis requires the use of antibiotics such as:

Giardia lamblia infection does not require any special diet. Some people develop secondary lactose intolerance after the symptoms subside but this is temporary. Nevertheless those giardiasis patients who are experiencing lactose intolerance should avoid milk and dairy products so as not to trigger diarrhea and other gastrointestinal symptoms.

Although a special diet is not necessary, proper rehydration is crucial in order to prevent dehydration. Commercially prepared oral rehydrating solutions (ORS) are the better option, as it contains the optimal concentration of solutes to prevent worsening of the diarrhea. When rehydration cannot be done through the mouth (orally), then intravenous (IV) fluid administration may be necessary.