Human hairs are elongated strands primarily composed of the protein keratin. The main function of hair is to provide warmth, both by acting as an insulator on the surface and by standing erect in cold and windy conditions to slow down the flow of air on the skin surface. It may also offer some degree of protection, albeit minimal compared to other structures in the body like the bones, and helps to trap dust particularly when it is located at the entrance of cavities. The hair follicle and shaft along with the erector pili muscle that moves it and the sebaceous gland that empties into the shaft is known as the pilosebaceous unit. It is believed that some chemicals in the oily sebum secreted from these glands adhere to the hair follicle and shaft and may contribute to odors that could play a part in attraction. For humans though, hair plays an integral part in the aesthetic features, be it the  hair on the head, eyebrows or even torso.

A strand of hair broadly has two parts, the follicle which lies under the skin and originates from the bulb, and the shaft. The hair shaft has 3 layers – the cuticle on the outside, the cortex in the middle and medulla which is sometimes present at the core. There are three types of hair – lanugo, vellus and terminal hair. Lanugo hair is seen on newborns where it covers most of the body. It does not have a central medulla and lacks pigmentation. Eventually this is replaced by vellus hair which is seen from childhood right till adulthood. Terminal hairs are the thicker and coarser hairs seen primarily on the beard, armpits and pubic areas after puberty. The terminal hairs usually have a central medulla. All these different types of hair are produced by the same follicle which responds to various influences, primarily hormonal factors, to determine the type of hair that will grow.

Hair follicles are found throughout the body except for the palm, soles and on parts of the genitalia. The highest density of hair follicles is found on the scalp, both in males and females. There is anywhere between 500 to 1,000 hair follicles per square centimeter. Ethnic differences in hair contributes to the texture and density. Caucasians generally have a straighter hair type in comparison to African-textured hair that is more curly and coiled. There are fewer follicles per square centimeter on the African scalp compared to Caucasians. 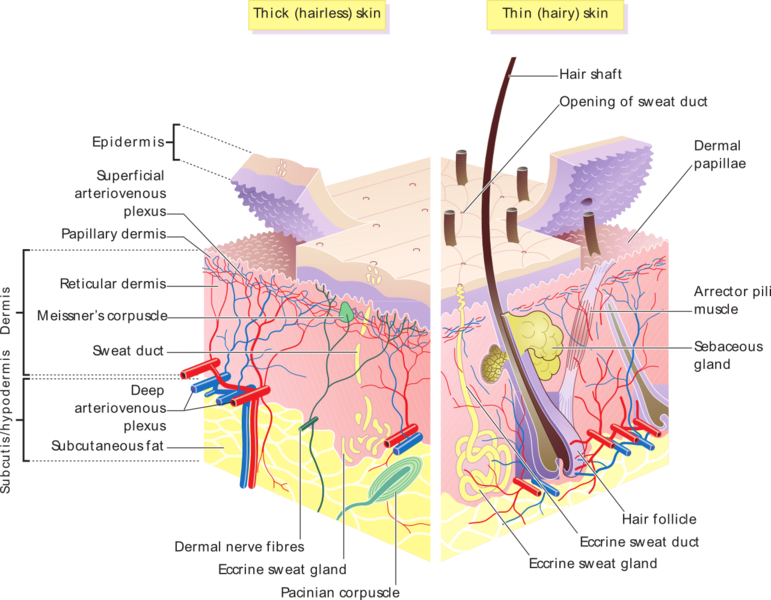 Although a strand of hair is crudely divided into the hair follicle and shaft, the structure is actually more complex than this. Broadly it can be divided into three segments – lower, middle and upper. Both the lower and middle segments are located within the skin with two important accessory structures. Lower down is the erector pili muscle and higher up is the duct of the sebaceous gland. The bulb and suprabulb (lower segment)  lie below the attachment of the erector pilae muscle. The isthmus (middle segment) is the portion that lies between the attachment of the erector pilae muscle and sebaceous duct. The area above the sebaceous duct is known as the infundibulum (upper segment) and protrudes from the skin surface.

Human hair grows at a rate of about 300 micrometers per day. This means that hair would grow about 1 centimeter every 30 days, however, the difference among hair types and the shift between growth phases may alter this. The growth rates can vary between the vellus and terminal hairs. It may also differ among races as African hair grows slower, around 250 micrometers per day and Caucasion hair around 380 micrometers per day. Overall hair growth varies among different sites of the body, and even among the thousands of follicles on a single site. Some hair follicles are growing, others regressing while the remainder is resting. Therefore it is difficult to conclusively determine a standard growth rate for all strands of hair at any one time.

There are three phases of hair growth which every hair follicle undergoes :

This is the phase of active growth. This cycle last between 5 to 7 years for scalp hair and a much shorter period for hair on the eyebrows, armpits and pubis (as short as 4 to 7 months).  Within the bulb of the hair is the dermal papilla protruding into the center of it. This is surrounded by the hair matrix. The dermal papilla controls hair growth while the matrix contains the collection of epidermal cells that rapidly divide and contributes to the length of the shaft. Keratinization occurs in the middle segment and emerges as the fully keratinized hair shaft (upper segment).

The catagen phase is a transition period between the anagen phase and telogen phase. The hair bulb is pushed upwards and becomes keratinized. It appears short and thick and is referred to as club hair. The catagen phase tends to last just a few weeks, typicaly around 2 to 3 weeks.

This phase is the resting period where no new cell division occurs. The length of the hair is therefore stationary. During this time the dermal papilla essentially “reloads” the matrix with new cells in preparation for the anagen phase. It can last anywhere from 3 to 9 months. After this period, the anagen phase commences once again. However, every so often the telogen phase is followed by shedding (exogen).

Everyday about 100 strands of hair are shed from the average scalp. This is mainly the shaft of the hair that is shed and the follicle is retained. Although the exogen phase often follows telogen phase, it sometimes does not and a hair follicle may go through several cycles before being shed. In this way, although 10 to 15% of the hair follicles are in telogen phase at any one time, not all will continue to exogen thereby resulting in a significant loss of hair.