Viral hepatitis is inflammation of the liver caused by an infection with the hepatitis virus. There are five such viruses which can lead to an infection of the liver, some of which may progress to a chronic infection or only arise as a sequelae to liver disease. Liver function is affected to various degrees and with acute infections there is full recovery. Of the different types of viral hepatitis, it is hepatitis A, B and C that are the most common, with the latter two being leading causes of chronic hepatitis. While there are vaccines for hepatitis A and B, there is currently no vaccine for hepatitis C which in most cases causes severe liver damage. It is therefore considered to be one of the more serious types of viral hepatitis and features high among the causes of liver-related deaths globally.

What is Hepatitis C?

Hepatitis C is a viral infection of the liver caused by the hepatitis C virus (HCV). It is an RNA flavivirus and considered to be one of the most serious of the hepatitis viruses. Hepatitis C rarely causes an acute infection but is commonly seen as a chronic infection persisting for decades. In fact most patients infected with the hepatitis C virus never experience an acute infection stage and are therefore often unaware of it until it is discovered upon routine medical tests or once the complications arise from extensive liver damage. Although 80% of hepatitis C cases progress to chronic liver disease like liver cirrhosis, there is about 20% of infections that remains mild with minimal liver damage even in the long term.

Once HCV enters the bloodstream, it replicates rapidly and due to difficulty in acquiring immunity (explained below), it is able to bypass any coordinated response by the immune system at the outset. The virus targets hepatocytes (liver cells) and is believed to also infect B-lymphocytes. The quantity of the virus in the blood increases substantially (viremia) until other white blood cells, like T-lymphocytes, can initiate a response against it. These response may not be specific for HCV but for viruses in general. It is further aided by helper T-cells. Although the immune cells may clear most if not all of the virus from the system, about half of the liver cells remain infected. The infection causes ongoing inflammation of the liver tissue with fibrosis (cirrhosis).

The hepatitis C virus is spherical virus containing its genetic information in the form of a single strand of RNA. This is an easier to process form compared to DNA since transcription is not necessary. This reduces the need for special viral enzymes to facilitate the transcription process although there are other enzymes for protein production. RNA is more prone to damage and this is advantageous to the virus as it allows for easier mutations. This keeps the viral structure changing so that immunity, either passive or active, is difficult to attain by the human host. 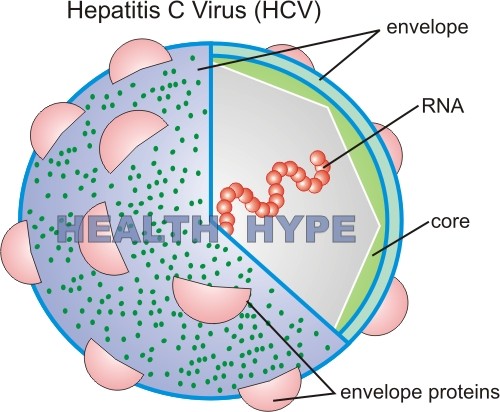 The virus has a core containing the RNA and an envelope enclosing the inner structure. Two envelope proteins, known as E1 and E2, allow the virus to attach to liver cells. However, the E1 protein has certain regions that is easily mutated and therefore makes immunity difficult. There are six major HCV genotypes, some of which are more common in certain regions and not frequently seen in other areas. The most common of these genotypes globally is genotype 1 which is also known for causing severe liver disease and is a major risk factor hepatocellular carcinoma (liver cancer).

Hepatitis C transmission is associated with contaminated blood. It can therefore be spread through blood transfusions, organ transplantation, IV drug use, needle stick injuries, sexual contact and less commonly through vertical transmission (mother to child). Sexual transmission is not the most effective method of transmission of HCV which is in contract to hepatitis B, the other leading viral cause of chronic hepatitis. Cocaine snorting (intranasal administration) may account for a small number of cases and should be considered as a risk factor. Given these modes of transmission, hepatitis C is therefore more frequently seen in patients with certain blood disorders, organ failure, in health workers, drug users and sex workers. Other possible risk factors may include tattooing, body piercing and acupuncture treatments.

The incubation period for hepatitis C is between 2 to 26 weeks with an average period of 6 to 12 weeks. However, most patients remain asymptomatic for years apart from fatigue. Routine screening for high risk patients is usually the only way to detect an infection at an early stage. Apart from fatigue, some patients may display other non-specific symptoms like :

Liver tenderness may sometimes occur in the early stages of hepatitis C (read more on liver pain). Cirrhosis may develop after 5 to 20 years ad therefore the late symptoms of liver cirrhosis need to be considered under the clinical picture of hepatitis C. Usually at this stage the damage to the liver is widespread and irreversible.

There is currently no viable vaccine for hepatitis C. As explained under the structure of the hepatitis C virus, its RNA genetic coding which is easily mutated allows for rapid antigenic changes and therefore no passive or active immunity can be acquired against HCV. However, efforts are underway to create a vaccine that targets the core proteins rather the envelope proteins that easily changes with mutations.