Menstrual blood loss is usually minor and should not compromise a woman’s health. Most women lose less than 60ml (about 2 fluid ounces) during a period. Some women may lose slightly more blood that others but usually it is not enough to be considered as a heavy period. The body quickly restores the lost blood and prepares for the next period. However, heavy periods characterized by significant blood loss does occur sometimes. In many instances it is a once off episode now and then which does not pose a serious threat to a  person’s health.

For some women, heavy periods are a regular occurrence and can even occur non-stop. It occurs every month and can be debilitating. The medical term for heavy periods is menorrhagia. It means that there are abnormally large quantities of blood loss or a prolonged periods. Usually pain and cramping are also present. The blood loss can be significant enough to lead to complications such as iron-deficiency anemia. Depending on the severity, iron-deficiency anemia can cause a host of debilitating symptoms long after the bleeding stops. 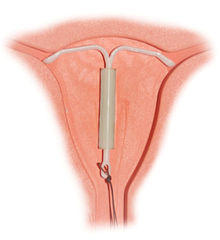 Treating heavy periods depends on a number of factors. Firstly it has to be considered whether you plan to have a baby anytime soon. Some treatments prevent you from falling pregnant. Secondly the underlying cause of the heavy bleeding determines the approach to treatment. Sometimes the cause of heavy bleeding is unknown and cannot be established. This further complicates treatment. Lastly non-stop bleeding brings into question whether you are willing to not have anymore children in life as the treatment options may lead to sterility.

Medication is the first line of treatment in stopping heavy periods. But when it fails then surgical procedures may be necessary.

NSAIDs (non-steroidal anti-inflammatory drugs) are also used to treat heavy periods and has a double benefit. Firstly NSAIDs assist with managing the pain and cramping that often occurs in menorrhagia. But it can also assist in reducing blood loss. Studies have shown that using NSAIDs for heavy periods can decrease the blood loss by up to 50%. The reason that NSAIDs helps with the blood loss is due to prostaglandins. These chemicals regulate the amount of blood lost from the uterus during periods. NSAIDs affects the imbalance of prostaglandins that may occur in heavy periods.

Oral contraceptives (birth control pills) are primarily intended to prevent pregnancy but the hormones delivered in these pills can also regulate the menstrual cycle. The pill alters the hormone levels in the body in a way that simulates pregnancy. As a result the ovaries do not release any egg cells. The period you have while using the pill is known as a withdrawal bleed. It occurs when the hormone levels dip when taking the “blank” pills in the pack. In this way oral contraceptives reduce excessive bleeding and keep the periods within a normal duration.

Progesterone pills may also be used in treating heavy periods. The first half of the menstrual cycle is dominated by estrogen and the second half by progesterone. The hormone progesterone plays a role in pregnancy but also helps in regulating the menstrual cycle. It may be administered for a short duration of around 10 days to correct the hormonal imbalance responsible for heavy bleeding and stabilize the cycle. In this way it can be used to reduce excessive bleeding.

Another method of treating heavy periods is to use a hormonal intrauterine device (IUD). It releases a type of progestin which are chemicals that are similar to progesterone. The hormonal IUD thins the endometrium which lines the inside of the uterus. As a result the menstrual blood flow decreases. It also helps to ease cramping. These types of IUDs are used for preventing pregnancy but are also beneficial in the treatment of heavy periods.

Dilation and curettage (D&C) is a minor surgical procedure that can be used to treat heavy periods. It is commonly conducted procedure and very effective for menorrhagia. However, it may not have lasting effects and may have to be repeated several times. In a D&C, the cervix is first dilated and the inner lining of the uterus known as the endometrium is scraped with an instrument known as a curette. It is usually performed under general anesthesia (GA) and does not require an overnight hospital stay.

A hysteroscope is an instrument that is used to view the cervix and uterus. It is a long thin tube with a light that is inserted through the vagina. The procedure is known as a hysteroscopy. It can be done to examine and diagnose a problem in which case it is referred to as a diagnostic hysteroscopy. When it is done to correct a problem like removing a polyp, then it is known as an operative hysteroscopy. Once the doctor can spot the problem during hysteroscopy, it can be surgically corrected. This should control menorrhagia.

If other measures have not worked in stopping heavy periods, and if the bleeding is severe, your doctor may suggest other more invasive procedures. One of these procedures is endometrial ablation. Here the inner lining of the uterus is permanently destroyed. It is effective in reducing bleeding but also compromises a woman’s ability to fall pregnant. Another procedure known as endometrial resection removes the inner lining of the uterus. The ability to fall pregnant is also compromised with this procedure

A hysterectomy is the surgical removal of the uterus. It is usually the last option for heavy bleeding. A hysterectomy will stop the abnormal vaginal bleeding but it will also mean that you cannot conceive ever again. Menstrual periods will stop permanently. The procedure is usually conducted in women approaching menopause or during menopause. It is sometimes performed in younger women but only after careful consultation and once it is decided that no more children are desired.