What is Raynaud Phenomenon?

Raynaud phenomenon is a condition where the small blood vessels at the peripheral parts of the body (finger, toes, ears and/or nose) drastically narrows with cold or stress. Although this response is normal, in Raynaud’s phenomenon it is severely exaggerated and there is drastic reduction in blood flow to the affected part. Sometimes the condition occurs on its own for reasons that are not clear and it is referred to as primary Raynaud phenomenon or Raynaud’s disease. At other times the sudden  narrowing of the blood vessels is related to some underlying disease and is then referred to as secondary Raynaud phenomenon.

How common is Raynaud phenomenon?

Raynaud phenomenon is not an uncommon condition. It is estimated that it affects about 1 out 10 adults in the United States with the incidence being slightly higher among women. The average age of onset is 30 years old. Raynaud phenomenon tends to be more common among people who live in cold climates and who have a first-degree relative with the condition.

How does Raynaud phenomenon occur?

The arteries carry oxygen-rich blood from the heart to different parts of the body. Blood coming from the heart and is laden with oxygen and nutrients. The size of the arteries become progressively smaller the closer it comes to a target organ that is to be supplied with blood. Eventually arterioles and then capillaries emerge from the smallest of arteries. The walls of arteries and arterioles have muscle cells that contract to narrow the vessel and relax to widen it. In this way blood flow to a specific area can be controlled and ultimately the supply of oxygen and nutrients can be regulated as is needed for different situations.

Various factors control the narrowing and widening of these arteries in the normal course of life. For example, when the target area is overactive and needs more oxygen and nutrients, the arteries widen so that the blood flow increases. Temperature also has a role to play on the widening or narrowing of the arteries. If the environment is cold, heat needs to be retained and the arteries narrow to reduce heat loss from the body. The widening (vasodilation) and narrowing (vasocnstriction) of arteries vary to very slight degree so as not to severely disturb circulation.

What happens in Raynaud phenomenon?

In Raynaud phenomenon, the vasoconstriction is very pronounced, sometimes to the point that blood flow is almost totally cut off. It is not in proportion to the stimulus (trigger) and in some cases there are no triggers that can be identified. The same mechanism that causes the narrowing of the arterioles in normal situations are just very exaggerated in Raynaud phenomenon. The muscle cells in the arteriole walls essentially go into spasm, therefore the term vasospasm. With reduced blood flow to the target area, it appears pale in color, becomes cold and number and restricted oxygen and nutrient supply can even lead to the formation of ulcers.

Which parts of the body are affected? 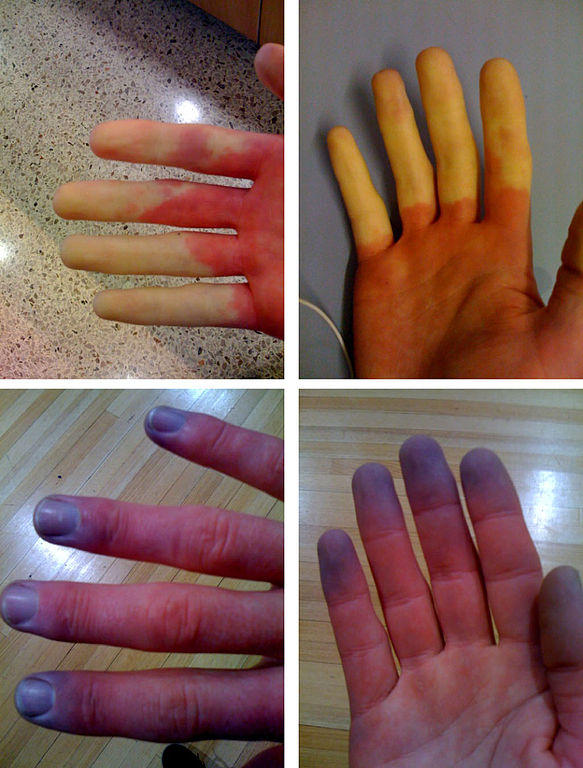 What are the symptoms?

Raynaud phenomenon occurs as recurrent attacks of vasospams which may last for anywhere from a few minutes to even hours. The symptoms that occur in Raynaud phenomenon are reversible. In some severe episodes, which are rare, it can cause damage to the affected tissue as a result of interrupted blood supply. This tissue injury is known as ischemia. In instances where it is very severe, prolonged or recurrent over short periods it can even progress to the formation of open sores (ulcers).

The skin over the affected area becomes pale in color (pallor) since blood in the superficial arterioles and capillaries are responsible for some of the skin color. As the condition worsens and persists, the oxygen supply to the affected area becomes severely compromised and this is seen as a blue discoloration (cyanosis). Once the attack ceases, blood rushes to the area to restore oxygen supply and becomes red in color (hyperemia).

Reduced blood flow also decreases sensation in the affected area. Initially this is felt as a tingling sensation and eventually the area becomes numb. In very rare cases there may be complete numbness meaning that there is a total loss of sensation. As the blood flow returns after the attack, a patients report a burning or stinging sensation. Pain can persist long after the attack when there is ulceration.

The exact cause of primary Raynaud phenomenon, also referred to as Raynaud disease, is unknown. It is referred to as a functional peripheral arterial disorder because it is not due to any disease (pathology) but it is not a normal physiological response to various factors that would cause mild to moderate vasoconstriction. Despite there being no known cause, there are certain aggravating factors like cigarette smoking and regular intake of caffeinated drinks.

Secondary Raynaud phenomenon is due to various underlying diseases and disorders. These causes may include :

How is Raynaud phenomenon diagnosed?

The patient’s symptoms, clinical findings and medical history may be sufficient for a diagnosis of Raynaud phenomenon. Capillaroscopy and measurement of digital blood pressure after immersion in cold water are two tests that can be used to confirm the diagnosis. Various other diagnostic investigations may be undertaken to identify the cause of secondary Raynaud phenomenon.This includes blood tests and imaging studies. It is important to conduct these tests to rule out an underlying disease before diagnosing the condition as primary Raynaud phenomenon (Raynaud disease).

What is the treatment for Raynaud phenomenon?

Raynaud phenomenon should be managed conservatively except in severe cases when medication may be needed. Lifestyle modification for the management of Raynaud phenomenon are directed at avoiding the triggers or minimizing the chance of an attack. This includes :

Cases of primary Raynaud phenomenon that are severe or non-responsive to lifestyle changes may require the use of medication. These drugs widen the arterioles (vasodilation). It includes :

Treatment for secondary Raynaud phenomenon should be directed at the underlying cause.