Contamination of food and water with Escherichia coli (E.coli) has been a problem that has plagued mankind throughout time. These species of bacteria naturally reside in the bowels of humans and animals and there is a number of ways that it may contaminate food and water. Of the different strains of E.coli, it is the enterohemorrhagic E.coli (EHEC) known for producing Shiga-like toxin or verotoxins (Shiga-toxin E.coli ~ STEC; verocytoxic E.coli ~ VTEC) that can cause a severe diarrhea and lead to potentially life threatening complications like hemolytic-uremic syndrome (HUS). There are various serotypes of EHEC with the 0157 serotype (STEC 0157) being implicated for various outbreaks. In 2011, the European outbreak was due to STEC 0104, an otherwise rare cause of intestinal disease in humans.

E.coli diarrhea arises due to the fecal-oral route of transmission. This means that food or water contaminated with fecal matter containing E.coli enters the gut and causes disease. Understanding the route of transmission is important in preventing infection, particularly during times of outbreaks. It is also known as the farm-to-fork route because it originates mainly on farms and causes disease when contaminated food is eaten. Preventative guidelines involves good personal hygiene, cleansing food thoroughly if eaten raw or partly cooked and cooking food above 50 degrees Celsius  as far as possible.

E.coli has a very low infecting dose with less than 100 organisms per gram of food being sufficient to cause disease in humans. It is believed that with some strains of E.coli, this can be as low as 10 organisms per gram of food. With such a low infecting dose, preventative measures need to be meticulous and caution when eating in commercial food establishments and using public toilet facilities is crucial.

E.coli is found in many animals but it is often livestock like cattle that has been implicated in outbreaks of STEC diarrhea. A significant number of cattle may be a normal reservoir for these strains of E.coli. Feces containing STEC E.coli may contaminate meat products, dairy, water and soil. This gives rise to a number of routes of transmission that may sometimes not be as obvious. Symptoms of E.coli infection may occur only 1 to 7 days after exposure (usually within 3 to 4 days) and the route of transmission may not be recalled. 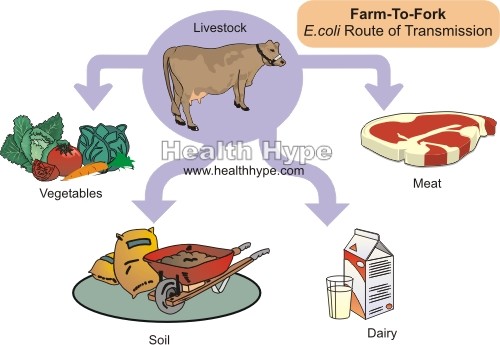 Meat products may become contaminated when the animal is slaughtered and with subsequent processing. Rupture of the bowels during evisceration causes surface contamination of the meat. This means that it is only the surfaces of the meat exposed to the environment that will be contaminated. However, surface contamination can also occur within the butchery or kitchen if meat is handled improperly. Proper hygiene like washing the hands regularly particularly after using the toilet is necessary for meat and food workers. Another danger lies in mincing where entrails may be included in lower quality food products. If the meat is eaten rare or raw, as with a rare steak or steak tartar, the chance of E.coli infection is very high.

The udders of animals are not sterile. Traces of fecal matter may reach the udders during defecation, from contaminated soil or contact with other animals. Subsequent milking may cause the fecal matter and E.coli to contaminate the milk. Without proper pasteurization, the E.coli will not be destroyed and contaminated milk will reach industries dealing with dairy, eating establishments and the kitchen table. Dairy products may also be contaminated in this manner. Once again, there is also the possibility of human handling being the source of contamination if food workers do not adhere to good hygiene practices.

The contamination of vegetables may be slightly more complex as there is usually no direct contact with the animal or meat products. It may arise with the run-off water from neighboring fields housing grazing animals (pasture) contaminating the vegetable fields directly or its water supply used for irrigation. This route of transmission is more likely to affect vegetables that are eaten raw like cabbage, carrots, cucumbers, lettuce, spinach and tomatoes. Salads and raw vegetables used in sandwiches and burgers are often implicated as being the source of E.coli infection in outbreaks. Cooking vegetables, however, greatly reduces the risk. The handling of vegetables that are eaten raw or partially cooked by food workers may also lead to contamination.

Another route may involve children playing in contaminated areas and camping on contaminated fields where a person comes into direct contact with the soil. With both farm workers and the general public exposed to contaminated soil, good hygiene is crucial in preventing E.coli outbreaks.

Prevention involves multiple measures particularly for those who are considered to be at higher risk of contaminating foods and water. This includes farm workers, slaughterhouse workers, meat packers, food workers, green grocers and workers, and those exposed to farm soil even if not on a regular basis.