The prostate gland, which lies below the bladder and surrounds the urethra, is the male organ that produces semen. It is very common for the prostate gland to start enlarging after the age of 40, although it may not always produce symptoms. The first noticeable symptoms appear when the enlarged prostate gland presses upon the urethra, causing problems with urination. The most common problems encountered with the prostate are benign prostatic hyperplasia (BPH), prostate cancer and prostatitis.

Anatomy & Physiology of the Prostate Gland

The prostate gland is about the size of a pea at birth, growing slowly in childhood, but undergoes rapid development at puberty. It becomes the size of a walnut by the age of 25, when it is thought to be fully developed.

The prostate gland lies below the bladder, wrapped around the urethra (the tube that drains urine from the bladder), between the pubic bone and the rectum. It is slightly conical in shape, consisting of a base, an apex, an anterior (front), a posterior (rear), and two lateral (side) surfaces. It is partly muscular and partly glandular and is surrounded by a thick capsule. 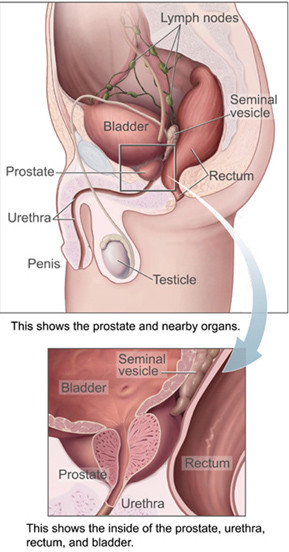 The prostate gland is divided into several lobes, namely :

The prostate may also be divided into zones according to their function :

The prostate gland produces components of semen which helps to nourish and transport sperm during ejaculation. This milky white fluid, slightly alkaline in composition, also helps to neutralize the acidic environment of the vaginal tract and thus helps in prolonging the life span of the sperm. The prostatic secretion consists of alkaline phosphatase, citric acid, prostate-specific antigen (PSA), and proteolytic enzymes. The male hormone, testosterone, is necessary for proper functioning of the prostate gland.

Enlargement or hyperplasia of the prostate occurs when cells in the central portion of the gland start multiplying, which may compress the urethra, causing difficulty in passing urine.

The clinical problems associated with the prostate gland may be divided into two categories :

Cancer of the prostate gland is one of the most common types of cancer in men and is more prevalent in the older age group. It most frequently remains symptomless in the initial stages, but there may be urinary symptoms similar to those of benign prostatic hyperplasia. Early detection and treatment gives better chance of survival.