Helicobacter pylori or H.pylori is a gram-negative, helix/spiral shaped bacterium (plural ~ bacteria). It has multiple flagella (long tail-like projection) at one end which allows it to move through the stomach and burrow deep into the stomach lining (gastric mucosa). This bacteria has in-built mechanisms to neutralize stomach acid around it and has an affinity for gastric epithelium. H.pylori is therefore almost always found living exclusively in the stomach and to some extent in the duodenum.

H.pylori infection of the stomach is one of the main causes of acute gastritis (stomach lining inflammation) and peptic ulcers (more often duodenal than gastric ulcers). The prevalence of H.pylori infection in adults is significantly high but most cases are asymptomatic (no symptoms). This could be due to  the absence of individual risk factors, the strain of the H.pylori involved or other unknown factors.

H.pylori burrows deep into the mucosal lining until it finds and attaches to the antigens on the surface of epithelial cells. The bacteria produces large amounts of urease, an enzyme that can break down urea in the stomach. By breaking down the urea, it produces ammonia which forms a ‘cloud’ around the bacterium. This raises the pH (acid-base level) making the immediate environment less acidic thereby protecting the bacterium from the corrosive stomach acid. 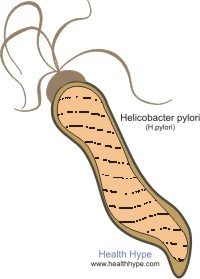 How is H.pylori spread?

The most common way it is spread is through oral-to-oral contact (stomach contents from one person’s mouth to another). Kissing or sharing food is one method of transmission especially if there is gastric refluxate or remnants of vomit in the mouth. Less frequently, saliva may be a medium of transmission. This may explain the incidence of H.pylori infection in families, between parent-child and siblings.

The other method is the fecal-to-oral (stool to mouth). This may involve contaminated food or water and could account for the very high incidence of H.pylori infection in the adult populations of developing nations (unclean water sources).

Before commencing with treatment, Helicobacter pylori infection needs to be confirmed by one or more of the following tests :

The aim of treatment is to eradicate the H.pylori infection and allow for the stomach lining to heal to a sufficient extent where the structural integrity can be restored and the natural defenses can prevent a re-infection of the area.

Helicobacter pylori is a bacterium and therefore an antibiotic is necessary to eradicate it. However, the H.pylori species has become fairly resistant to antibiotics and two or more antibiotics may need to be used simultaneously. In addition, a drug to reduce acid production will assist with easing the irritation to the stomach lining (gastritis) caused by the stomach acid. This will allow for the inflamed lining or ulcer to heal. The decrease or disappearance of gastritis symptoms after treatment indicates a successful eradication. This can be confirmed with H.pylori status testing after therapy especially in a case of  persistent or recurrent symptoms after therapy.

The first line of treatment that is widely used these says is a triple therapy regimen where 3 drugs are used simultaneously. The types of drugs used are as follows :

The combination of these drugs are prescribed as follows :

This treatment usually lasts for 10 to 14 days, although 7 days may be sufficient – this is dependent on regional factors. Following the triple therapy, acid suppressive therapy will be continued for 4 to 12 weeks.

If triple therapy fails, then quadruple therapy (using 4 drugs) is then advisable. This is the second line of treatment for H.pylori gastritis.  Acid suppressive therapy may then be followed up for 4 to 12 weeks. The chances of adverse effects are greater with quadruple therapy and it generally has poor patient compliance (meaning that many patients do not see through the entire treatment regimen or take it as prescribed).

Quadruple therapy for H.pylori eradication may include a PPI, bismuth-based drug and two antibiotics used simultaneously. H2-blockers may be included on a daily basis.

Treatment for Other Infectious Gastritis