Medically, hypoglycemia may be diagnosed by three factors which is known as Whipple’s triad : 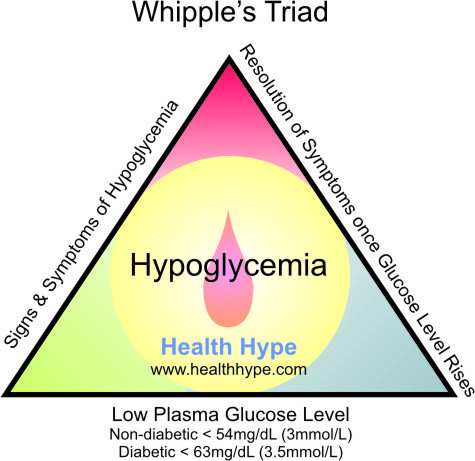 The term low blood sugar is often used frivolously to describe a range of symptoms that may or may not be related to a low plasma glucose concentration. There is also confusion relating to the blood glucose levels that can be classified as hypoglycemia.

The signs and symptoms of hypoglycemia can be divided into two categories :

There are are also general and non-specific signs and symptoms which should not be used in isolation to diagnose hypoglycemia. These general symptoms include nausea, fatigue, and headaches. Often the term ‘low blood sugar’ is used frivolously to explain the cause of these symptoms although other causes could account for it.

These symptoms are the early warning signs but may be absent in certain cases. In patients who experience frequent episodes of hypoglycemia, the body may stop releasing epinephrine. This is known as hypoglycemic-associated autonomic failure (HAAF) or is also referred to as hypoglycemia unawareness. The blood glucose levels continue to drop until the neuroglycopenic symptoms may be evident. It may only be at this point that the appropriate measures are implemented.

As the blood glucose levels continue to drop without any intervention, the glucose supply to the brain is severely impaired and may result in the symptoms listed below.

Eventually seizures and even a coma may ensue. Changes in behavior at this stage may resemble inebriation (alcohol intoxication, drunkenness) and is sometimes mistaken for alcohol dementia in alcoholics.

Hypoglycemia can be defined according to the presence of the features known as Whipple’s triad. This is often seen in a blood glucose level below 54mg/dL (3mmol/L) in a person who is not diabetic and blood sugar levels below 63mg/dL (3.5mmol/L) in diabetics.

Hypoglycemia in diabetics may occur as a result of :

Diabetic patients should be aware of nocturnal hyperinsulinemia as blood glucose levels drop during sleep and incorrect administration of insulin at night could result in hypoglycemia.

* Cushing’s syndrome usually results in hyperglycemia but acute hypoglycemia attacks may be occur.

Mild hypoglycemia is not necessarily a medical emergency unless the excessive use (overdose) of anti-diabetic agents or insulin has been implicated as a possible cause. This could rapidly progress into severe hypoglycemia. In most instances it can be managed in the home environment with readily available food ingredients.

Severe hypoglycemia is more likely to occur in diabetics – particularly insulin-dependent diabetes. The regular use of a blood glucose monitoring device is therefore essential and diabetics should not rely solely on their perception of low blood sugar levels.

If left untreated, hypoglycemia can lead to death. This is not only a concern for older patients with diabetes. Sudden death due to hypoglycemia may occur in a young person with type 1 diabetes. This is not common but typically occurs during sleep possibly as a result of cardiac arrhythmias induced by hypoglycemia.

The early warning signs as outlined in the Hypoglycemia Signs and Symptoms should be present and a blood glucose level below 70mg/dL (3.8mmol/L) in diabetics or 63 mg/dL (3.5 mmol/L) in non-diabetics is sufficient to warrant the implementation of the measures below.

A repeat dose of 15 grams of glucose may be necessary. Other signs and symptoms (neuroglycopenic) like confusion, inability to concentrate and poor coordination may take up to 60 minutes to resolve. If the blood glucose levels continue to drop despite the administration of glucose, this should be considered as severe hypoglycemia.

Severe hypoglycemia is not solely dependent on the blood glucose levels as some patients are cautious about seeking emergency medical attention despite the presence of serious signs and symptoms. Difficulty speaking, drowsiness, impaired coordination and mental confusion is sufficient to determine a case of severe hypoglycemia, especially if a patient is unresponsive to glucose, and should be differentiated from alcohol or drug intoxication.

Seizures, blackouts or a coma is a clear indication of severe hypoglycemia unless it is caused by other disorders. Ideally severe hypoglycemia should not be managed in the home environment but immediate measures are necessary until medical attention can be secured.