The pupils are the dark centers of the eye where light can enter the inner eyeball. The size of the pupil’s change with varying light conditions to allow more or less light into the eyeball. This is controlled by the iris. When the pupil’s are enlarged it is dilated and when it is small it is constricted. While these changes are not abnormal with different light conditions, sometimes the pupils are abnormally enlarged.

What are dilated pupils?

Dilated pupils are where the black center part of the eye is abnormally enlarged. This is known as mydriasis. While it is not abnormal for the pupils to be enlarged in dark conditions, it should usually respond to light and constrict accordingly. When it fails to respond to light and are enlarged, then the pupils are said to be dilated. Usually both pupils constrict or dilate at the same time but in some cases, only one pupil changes in size. This is seen in anisocoria.

There are a number of different causes of dilated pupils. It may be a symptom of certain diseases and disorders, as well as occur with the use of certain medication, illicit substances and toxins.. Pupils that are dilated and unresponsive to light are one of the signs of death, as the part of the brain that regulates the size of the pupil shuts down. However, this also depends on other signs such as an absent pulse, inactivity of the heart and cessation of breathing. Therefore dilated pupils on its own may not be a sign of death. 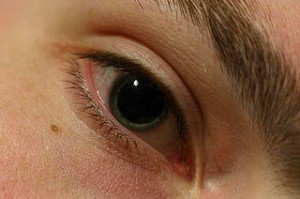 Physiologic dilatation occurs with reduced light intensity, strong emotions and when the ‘fight or flight’ response is initiated. This is not considered to be abnormal. Pathologic causes is where pupil dilation is due to some diseases. Iatrogenic causes is where the pupils become dilated due to the action of certain medication. 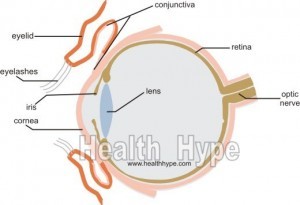 Parts of the Human Eye

Sometimes drugs are administered for the purposes of dilating the pupils in order to examine the inner eye. These drugs are known as mydriatic agents and are usually administered in the form of eye drops. It contains substances like atropine, scopolamine and phenylephrine.

Pupil dilatation may also occur as a side effect with the use of other drugs, like amphetamines, certain anthistamines, eye drops containing tetrahydrozoline used to relieve eye redness and with some decongestants like those containing pseudoephedrine.

Several poisons and toxins may cause pupil dilated. Some of these substances are naturally occurring like in plant material while others are synthetic. Toxic mushrooms, benzene and chloroform may cause dilated pupils. Deadly nightshade (Atropa belladonna) is a plant that contains atropine, scopolamine and hyoscyamine, which are known mydriatic agents. At one time drops made from this plant was used to dilate the pupil for cosmetic purposes.

Dilated pupils is a symptom and may cause in a number of different conditions. There may be a range of associated symptoms depending on the underlying cause. Some of these symptoms are due to the inability to regulate the light that enters the eye. These other eye-related symptoms include:

Apart from eye-related symptoms there may also be other symptoms present that are not related to the eye but caused by the same condition that is responsible for the dilated pupils.

The presence of these other symptoms varies from one causative condition to the other and also among individuals. It is important to consult with a medical professional as further investigations may be required for a definitive diagnosis.