The pressure within the cranial cavity, the part of the skull that houses the brain, is maintained at a fairly constant level. This ensures that the brain can “float” in the CSF and be cushioned by the fluid without being compressed against the skull by its own weight, colliding with the skull bone during movement or damaged by excessive fluid pushing against the brain. The intracranial pressure, however, may rise under certain conditions and can lead to serious effects or even be life-threatening. A rapid rise in intracranial pressure is more dangerous as the compensatory mechanisms involving the volume of CSF cannot take effect and damage to brain tissue ensues in a short period of time.

A rise in the pressure within the brain may be diffuse meaning that it is occurring throughout the cranial cavity or focal where it is only increasing in a localized area. A rise in intracranial pressure can be due to the brain expanding outwards as a result of edema or bleeding in the brain, or it can be from around the brain pushing inwards due to intracranial bleeding or hydrocephalus. 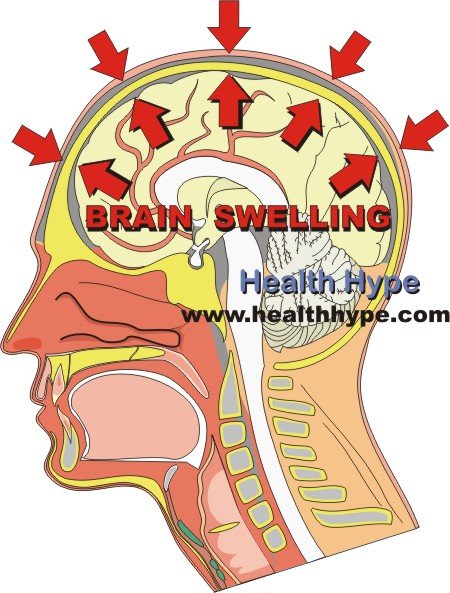 Depending on the mechanism, the blood vessels in the brain may be compressed and blood flow to the brain reduced. This starves the brain tissue of vital oxygen which results in ischemia, an inflammatory process associated with low oxygen availability. Further swelling then follows as a result of inflammation which in turn exacerbates the condition as it further contributes to a rise in intracranial pressure. A host of signs and symptoms may be seen and eventually with significant brain herniation, the brainstem may be compressed which is often life-threatening.

Causes of Pressure on the Brain

A rise in the pressure within the cranial cavity may be due to an enlarging mass or increasing quantity of fluid. This may include :

Signs and Symptoms of Pressure on the Brain

The three cardinal features of raised intracranial pressure include headache, papilledema and vomiting.

The pain is usually worse upon movement, at night and upon waking after sleep. Patients may also report an increase in the intensity of the headache upon coughing. Read more on pressure headache.

This is the swelling of the optic disc in the eye and is detected upon fundoscopic examination (conducted by a doctor). The margins of the disc are either partially or totally lost and the disc hyperemic with flame-shaped hemorrhages. Other changes in the eye may include irregular dilatation of the pupil in one eye.

Vomiting may be recurrent, initially without nausea, and can progress to projectile vomiting as the condition worsens.