Osteoporosis refers to a decrease in the calcium content of bones, which makes them brittle and weak. The femoral neck is a frequent site of osteoporosis in elderly women after their menopause. Though, this is because of the chemical imbalance cause by cessation of certain hormones, it is propagated further by a sedentary lifestyle.

The diagnosis of femoral neck osteoporosis is based on the measurement of bone mineral density (BMD) on a DEXA scan (Picture 2). The consequences of osteoporosis are bone pain and an increased likelihood of fracture. The fractures occur in situations, where otherwise normal individuals would not sustain any injury, like a trivial fall in the bathroom. 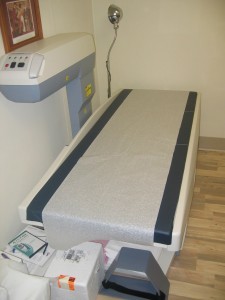 Treatment consists of nasal calcitonin sprays and intake of calcium rich foods and medication. Hormone replacement therapy (HRT), which is normally used for post-menopausal syndrome, is also highly effective. Active lifestyle can prevent or delay the occurrence of osteoporosis.

Bone cysts are cavities present within the bone, which are generally filled with fluid. Cysts occupy a part of the bone and reduce the strength of the bone, making it prone to fractures. They are normally present since childhood, but are detected only after a fracture or during investigations for some other disease.
Cysts do not necessarily require any treatment unless they are large in size or are found to be increasing in size. Large cysts are treated by a surgery in which the content of the cyst is removed and then filled with bone graft (bone taken from another site of the same person or from another person). Cysts that are increasing in size have the possibility of being a bone tumor. They have to be investigated and their growth monitored. If a tumor is detected, then it has to be surgically removed immediately to prevent its spread.

The femoral neck, normally, forms an angle of 120-135 degrees with the shaft of the thigh bone (Picture 3). This acts as a lever in easing the action of the muscles around the hip joint. An increase or decrease in this angle beyond the normal limits causes improper action of the muscles, and interferes with walking. An increase in the angle beyond 135 degrees is called as coxa valga or outward curvature of the hip joint. A decrease in the angle below 120 degrees is called as coxa vara or inward curvature of the hip joint. 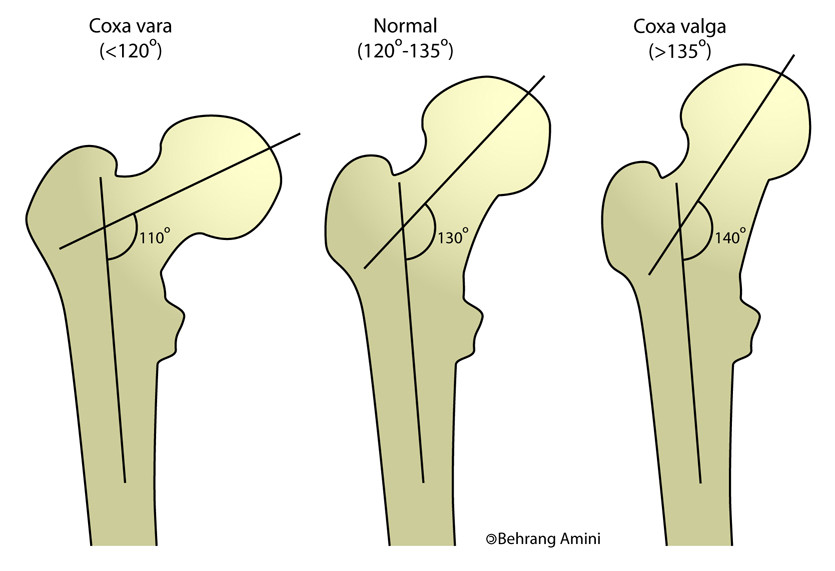 Both the deformities cause early hip joint arthritis, whereas, coxa valga can also cause frequent hip dislocations. Treatment is by a surgery known as femoral neck osteotomy, in which the bone is cut, realigned, and fixed, to bring the angle in the normal range. 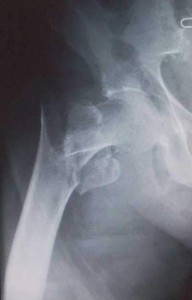 Treatment of Fractures of femoral neck

The treatment of femoral neck fracture depends on the time elapsed after the injury and the age of the patient.

If this is less than 6 hours, then the fracture can be fixed with 3 metallic screws passing through the femoral neck (Picture 5), which restores the blood supply of the femoral head (as the displaced fragments of bone are brought in place). After this treatment, the patient has to take bed-rest for 3 weeks followed by graded exercises. This surgery is highly affordable, and is frequently recommended for young and active individuals. Elderly individuals, with weak osteoporotic bones, are not suitable candidates for this surgery. 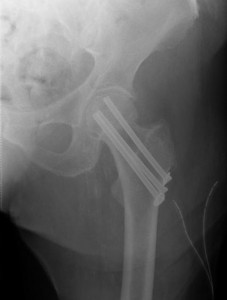 If the elapsed time is greater than 6 hours, the only treatment option left is partial hip replacement. In this procedure, the fractured femoral neck is removed along with the head and replaced with a metal implant of the same shape. Hip replacement surgeries are highly expensive and even after successful surgery there are certain restrictions like not to squat or sit on ground. However, if these restrictions are properly followed, one can lead an active life with no complications.