What is Hirschsprung disease?

Hirschsprung is a birth defect where the nerves in the lower parts of the large bowels are missing thereby affecting normal bowel movement in these sections. The contents of the colon cannot be pushed along and becomes backed up thereby causing an obstruction in the bowel. Since the condition is present from birth, symptoms will be evident from the start of life. However, it can be missed in mild cases although these days most babies are diagnosed within the first 2 to 6 months of age. Hirschsprung disease may exist with many other types of birth defects such as Down syndrome. The bowel will need surgical repair at some point in life and can lead to severe complications which may even be life threatening.

The bowels have a network of nerves within its walls that sends signals to other segments of the bowel and to the central nervous system (brain and spinal cord). This network is known as the enteric nervous system. It ensures that the bowels work in a coordinated manner by contracting and relaxing at the right time to push food and wastes along. These movements are known as peristalsis.

When the colon becomes distended to  a certain point, defecation is necessary. This ensures that the material in the colon is passed out into the environment as feces (stool). First the contractions in the lower parts of the large intestine (distal colon) push the stool into the rectum. At this point a person feels a sensation of needing to have a bowel movement.

In Hirschsprung disease, the nerves that controls these peristaltic movements are absent. The term for this absence is known as aganglionosis. In fetal development the network of nerve cells in the bowel wall form gradually starting from the top of the colon and ending at the rectum.  There are different networks of nerves in the bowel wall and it is the nerve cells between the muscles that are compromised. 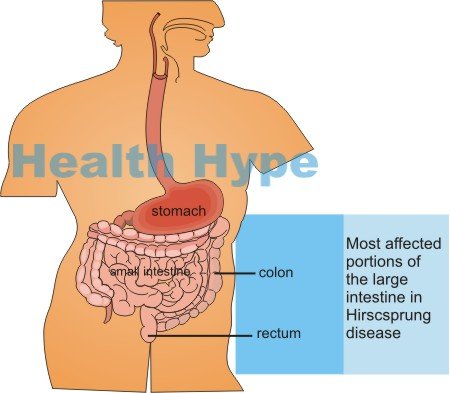 The exact cause of Hirschsprung disease is unknown. It appears to be a genetic problem. The nerve cells lying between the muscles in the bowel wall are absent and coordinated peristalsis cannot occur. However, external nerve fibers are still present but the entire nerve network needs to be functioning collectively for peristalsis. While there is some input to the muscles, it is not properly coordinated due to the absence of the nerve cells in the bowel wall. The symptoms seen in Hirschsprung disease is therefore caused by this disordered bowel motility.

Although the cause of Hirshsprung disease is not known, it is more often seen with certain risk factors. All of these risk factors point to a genetic abnormality. Hirschspring disease is therefore more likely with the factors and conditions below.

The main symptoms are related to bowel movements.

Other symptoms that may also be seen in newborns but can be due to various other conditions, includes :

Failure to pass out feces can lead to fecal impaction and obstruction of the colon. Abnormal distention of the colon is known as a megacolon. There is the risk of bowel perforation which is uncommon. However, if it occurs then the chance of death is very high. Short bowel syndrome can develop with Hirschsprung disease which may lead to dehydration and malnutrition. Complications before and shortly after surgery includes enterocolitis, where the colon and portion of the small intestine becomes inflamed and sometimes infected.

In a barium enema, a tube in inserted through the anus. A contrast dye is injected into the rectum and colon. An x-ray is then taken and the bowels can be visualized. 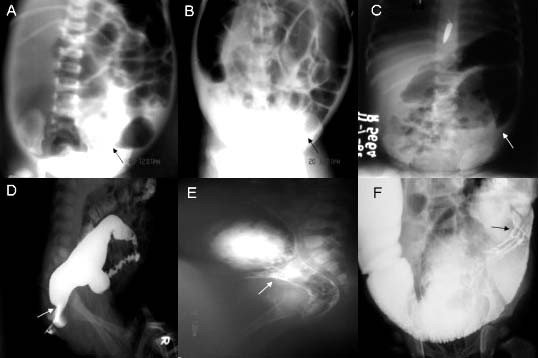 Picture from Wikimedia Commons. Films A, B and C are plain abdominal x-rays. Films D, E and F are x-rays with a barium enema.

A rectal biopsy is conduced by inserting a proctoscope through the anus into the rectum. A small sample of rectal tissue is then taken. Under microscopic examination the lack of ganglion cells will be a conclusive indication of Hirschsprung disease.

Surgery is necessary to treat Hirschsprung disease. In patients who are well the portion of the colon without the appropriate nerve cells are removed and rejoined to the rectum. This is done in one procedure. However, in patients who are not well, there is a two step procedure that is required.