What is Lyme disease?

Lyme disease refers to the body’s immune response to the bacterial infection caused by Borrelia burgdorferi. These bacteria are transmitted to humans through bites of the Ixodes ticks. This black-legged tick or deer tick is the main vector of Lyme disease. This tick-borne disease is common in northern part of the United States and in northern California on the west coast.

How common is Lyme disease?

Lyme disease is endemic in northern parts of the USA, Europe, and Asia, where the vectors (ticks) are distributed. The causes of increased incidence of tick disease are expansion of deer herds and the extended range of the vector. I. scapularis species is more common in the Northeast and Central part of United States and Canada, whereas I. pacificus is found on the Pacific coast. I. persulcatus or taiga tick is the principal vector in Asia. The vector in Europe is I. ricinus.

25% cases of Lyme disease are made up of children younger than 14 years.

The disease progresses in three stages.

In this stage, the bacteria may be present in the body, but the patient may not show any symptom.

In this stage, the bacteria spread throughout the body and produces symptoms. In the early stages of the disease, a skin rash called erythema migrans commonly develops. 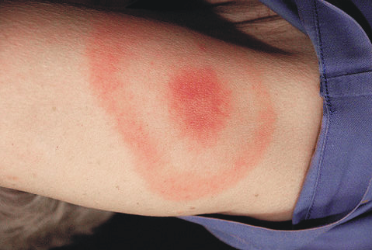 In this stage, an immune response to B. burgdorferi infection results in symptoms in various organs.

The bacteria tend to grow in the cells of the skin, central nervous system (CNS), heart, joints, and eyes. The bacteria can also be seen in the bone marrow, testes, the spleen, the liver, lymph nodes, and the placenta.

What happens in Lyme disease?

Many of the symptoms of the Lyme disease are caused by active bacterial infection while others result from body’s immune reaction to this infection. Although B. burgdorferi bacteria can affect any part of the body, if they enter the circulation, they have a predilection for certain sites as mentioned above.

B. burgdorferi colonizes in the infected Ixodes ticks, and then transmits to mammalian hosts (like humans). The life cycle of the Ixodes tick has four stages of development: egg, larva, nymph, and adult. The larvae, nymphs, and adult female ticks need blood meals. However, only nymphs and adult ticks can transmit B. burgdorferi.

The Ixodes larvae feed once in the late summer, nymphs feed once on the white-footed mice or other animals in the following spring and summer, and adults feed on the white-tailed deer once in the fall. If these animals are already infected, the Ixodes ticks acquire B. burgdorferi infection. When the infected tick bites a persin, it spreads the infection to humans.

Nymphs are responsible for 90% transmission in humans as they are smaller, present in greater numbers than adults, and because humans are easily available in the summer when nymphs feed.

In the human body

B. burgdorferi live in the mid-gut of the ticks, from where they move to the salivary glands. When an infected Ixodes tick bites a human, the bacteria are introduced in the skin. Once in the skin, the bacteria can meet any of the following fates:

The ticks are very small and the bites are often painless. However, a full-blown infection may present the following symptoms, arranged according to the stages:

Lyme disease is caused by Borrelia burgdorferi bacteria which is transmitted to humans through the Ixodes ticks. Part of the disease is a result of the infection itself and part of it is due to the immune system reaction to the presence of these bacteria in the body.

Living in or traveling to the areas of dense deer population increases the risk of developing the Lyme disease. People who work in the wilderness in these areas are at a greater risk, especially if the are handling deer – veterinarians, hunters or game/wild meat handlers. Domestic pets that travel to high risk regions may carry the tick back with them only to infect humans later on.

The following tests can be used to diagnose Lyme disease:

Treatment aims at curing B. burgdorferi infection, at providing relief from clinical symptoms, and at preventing complications. It is important to note that there is no vaccine to prevent Lyme disease and having it in the past does not mean a person is immune.

The best way to prevent Lyme disease is by taking precautions such as :

Antibiotics are given to treat Lyme disease. The choice of antibiotics depends on the patient’s age, allergies, clinical symptoms, stage of disease, and other medical conditions.