What is swine flu?

Swine flu , now known as the 2009 H1N1 flu, is caused by the orthomyxovirus which usually affects pigs but viral mutations allows the virus to cross species to other hosts like humans. The swine influenza virus (SIV) is another example of cross species viral infection which was previously seen with other zoonotic infections like in civets to humans (SARS or Sudden Acute Respiratory Syndrome) and from birds to humans as seen with avian (bird) flu.

Unlike SARS and bird flu, swine flu has mutated to the point where the virus can now spread from human-to-human. This current mutation is the cause of the global scare of the recent 2009 outbreak which is feared to become a pandemic. With the popularity of air travel, infected passengers from one region can easily travel to other nations and result in new outbreaks occurring in regions that were not prone to swine flu. The current human-to-human transmission of swine flu is caused by droplet spread through the contact with infected body fluids as in saliva or mucus when sneezing. 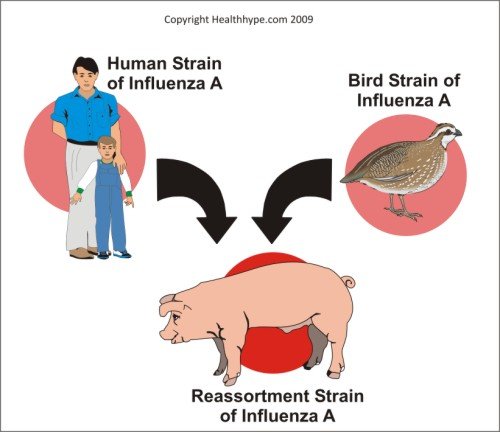 What was originally called, and is widely known as ‘swine flu’ since April 2009, when a new type of flu was discovered in a human in Mexico, is now named (according to World Health Organisation – WHO) as influenza A (H1N1) or, with a long term 2009 pandemic influenza A, subtype H1N1.

Other names for influenza A (H1N1):

Swine flu infection causes symptoms that are similar to the symptoms of influenza infection as seen during the annual ‘flu’ season. This may result in many cases of swine flu being misdiagnosed as a common cold or the ‘flu’ and if infected persons do not seek professional medical treatment, the infection can spread further in the general population.

The general symptoms of swine flu include :

The swine flu does not always require treatment. Proper nutrition, hydration and bed rest is often sufficient for a person to recover from the infection. However, in some cases antiviral medication may be necessary. This includes the following antiviral drugs:

Although it cause a severe bout of flu symptoms, the H1N1 “swine” flu is not a serious infection and does not pose a major health threat to most people. Infants and young children, pregnant women and the elderly may be at risk of more serious complications. People with a weakened immune system, like with HIV infection and AIDS, are also at risk of serious complications and even death.

The symptoms of swine flu are non-specific meaning that it could be indicative of many other conditions including the common cold or the annual flu. However in the presence of these symptoms and a strong history of exposure to infected persons or other related factors, a differential diagnosis of swine flu should be considered. A laboratory testing of mucus should be conducted to confirm the diagnosis. This is only relevant in the first few days of infection as swine flu is only contagious for 5 days.

Human infection with swine flu has been noted previously in history notably in 1918, 1930 and 1976.  In these cases, the primary mode of zoonotic infection was from pig to human seen in farm workers who came in close contact with pigs.

The three main types of influeza viruses known to infect humans are influenzavirus A, B and C. Of these three types influenza virus A is common and endemic to pigs. This means that the influenza virus A commonly infects both humans and pigs.

This reassortment strain of influenza virus causes swine flu (pig-to-human) but can be transmitted from human-to-human and in the current outbreak, it is known as the 2009 H1N1 flu.