The kidneys filters the blood to remove wastes, balance the electrolytes in the bloodstream and manages fluid volume in the body. If the kidney function is disturbed either by intrinsic or extrinsic factors, certain early signs and symptoms may become evident. With time this can progress to more generalized signs and symptoms as kidney functioning diminishes due to disease progression.

The kidney does not exist in isolation within the body. Other systems impact upon kidney (renal) functioning and the kidneys are also dependent on the rest of the urinary tract to excrete urine efficiently in order to continue with its activities. Any disruption may result in acute renal failure.

The kidneys play a number of important roles in the body beyond the formation and excretion of urine to expel wastes in the body. Without adequate kidney function, homeostasis cannot be maintained in the body. The kidney also has the following functions :

Kidney diseases are categorized in several ways based on the effect of kidney and manner in which kidney function is disrupted. This extends beyond acute and chronic renal failure and may give rise to a host of different signs and symptoms.

Other kidney diseases include :

These signs and symptoms may not always be indicative of a kidney problem and some are more likely to occur over time rather than in the early stages. 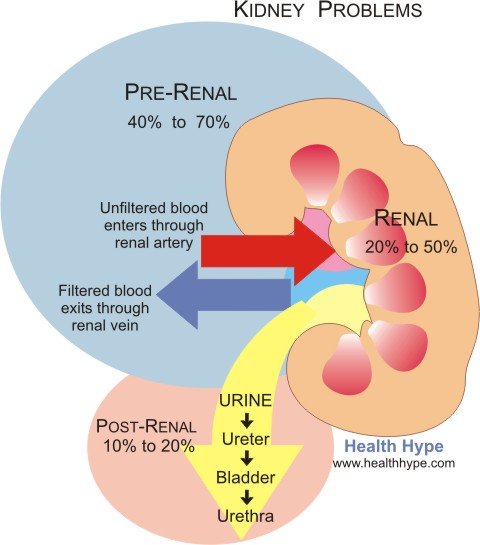 The causes can be divided into the following categories :

This may indicate a cause outside of the kidney (not the urinary tract) and accounts for 40% to 70% of kidney problems.

This indicates a problem within the kidney itself and accounts for 20% to 50% of kidney problems.

This may indicate a problem within the  ureter, bladder or urethra. In men, the prostate gland may also be responsible. This accounts for 10% to 20% of kidney problems.