Function of the Skin Blood Vessels 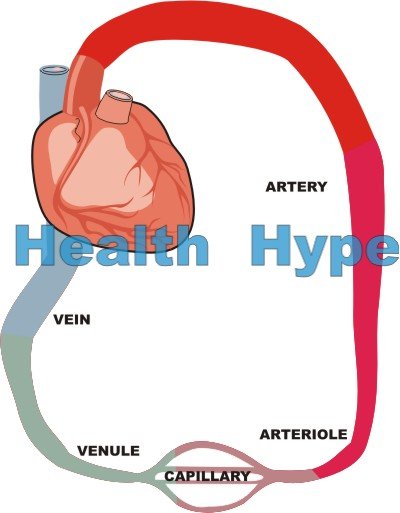 The skin is highly vascularized meaning that it has an extensive network of blood vessels just under the outer layer of the skin. Apart from nourishing the skin with oxygen and nutrients, and removing wastes and carbon dioxide, blood vessels also play a role in thermoregulation. Here it can widen (dilate) to allow heat within the body to pass out into the body thereby preventing the internal temperature from rising to dangerous levels. Conversely, when the environment is cold or the internal temperature is lower than normal, these blood vessels become narrow (constrict) thereby reducing the blood flow to the skin. Therefore less heat from within the body is lost to the environment.

Arteries carry oxygen rich blood from the heart to the skin and veins take away blood laden with wastes and carbon dioxide away from the skin. However, these blood vessels are large and slowly become smaller to be able to lie closely to the skin tissue. Arteries become smaller arterioles and eventually blood from here drains into capillaries which lie within the skin tissue. These capillaries carrying oxygen-rich blood are continuous with capillaries taking away carbon dioxide laden blood. This blood is then drained into venules and then the veins which eventually return the blood to the heart.

Visible Blood Vessels on the Skin

The odd visible capillary on the skin or the mucus membranes occurs at times and is often ignored. It is when it becomes permanently dilated and visible extensively on one site or throughout the body that it tends to prove a problem to a person. This is then known as telangiectasia. When it occurs as a network of visible capillaries, sometimes in resembling a web, it is also commonly referred to as a spider veins which is often seen with varicose veins in the leg.

Telangiectasia can be assessed according to the different types – primary (essential) or secondary. There appears to be greater risk of acquiring telangiectasia with one or more of the following factors :

These risks are similar for conditions such as varicose veins indicating that it is more likely secondary telangiectasia. Although the condition can occur in any person, it is more commonly reported among Caucasians and light-skinned individuals probably because the skin complexion causes the vessels to be more easily seen. Women seem to be more frequently affected than men.

Other forms of primary, but not essential, telangiectasia include :

Here the main problem lies with the blood vessels and the disease process is better understood.

Telangiectasia can occur with a host of conditions and is therefore termed secondary telangiectasia. This may be seen with :

Conditions where telangiectasia may be seen includes :

Telangiectasia is evident by the network of red capillaries which are usually less than 0.2mm in diameter on the surface of the skin and mucous membranes. In addition, other symptoms may also be present such as :

These concomitant symptoms are absent in the majority of generalized essential telangiectasia cases.

Telangiectasia is difficult to treat and with generalized essential telangiectasia, treatment is usually not necessary since it does not pose any problem beyond the cosmetic aspect. Many people therefore use cosmetic applications and tanning products to mask the capillaries. Conventional therapies used for larger leg vein problems such as sclerotherapy are not effective for telangiectasia and can worsen the condition. Electrosurgery and pulsed laser procedures may yield better results but is not completely effective for every site.